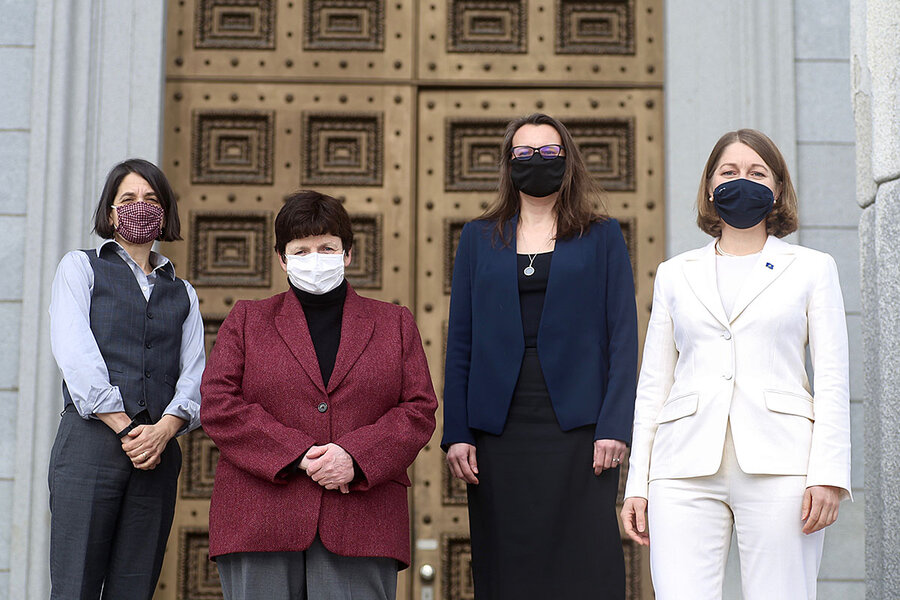 Yet Vermont’s progressive reputation may not completely square with reality. It is the only state that hasn’t sent a woman to Congress. Madeleine Kunin, Vermont’s first female governor, says some factors haven’t changed since she served three terms, from 1985 to 1991.

“The big challenge is still the whole question of who takes care of the children,” Ms. Kunin says.

“We need more good child care, we need more flexibility in the workplace and more recognition that women often have two jobs: taking care of the family and being at work.” But, she adds, “I think the more women you see in elected and leadership positions, even in the private sector, the more you’ll get.”

One group determined to see that trend continue is Emerge, a nationwide organization that recruits, trains, and provides a supportive network for Democratic women to run for public office. Its Vermont chapter began seven years ago. Speaker Krowinski and Ms. Balint are both Emerge alums, and in November, Molly Gray became the first Emerge candidate to win statewide office with her election as lieutenant governor.

Ms. Gray says issues affecting women were a key part of why she ran for office, and she notes a prior experience as an example of this.

“My mother had been hospitalized,” Ms. Gray says. “I had used up all my vacation and sick days to care for her, and I was going to be in the tough place of choosing between caring for her or paying the bills, if I was to take unpaid leave.”

The issue has been a glaring one during the pandemic, Ms. Gray emphasized. In January, 73% of Vermonters receiving regular unemployment insurance benefits were women, according to the Vermont Legislative Joint Fiscal Office.

“Here in Vermont, we know that women often are providing child care, caring for older Vermonters and family members, and are deeply impacted when the cost of child care, or the availability of paid family leave, force them to leave the workforce,” Ms. Gray says.

For Ms. Balint, the struggle between parental duties and holding public office is familiar. When she started in Vermont’s General Assembly in her 40s, her children were in preschool and kindergarten.

“Those first few years were rough,” she recalls.

For those considering legislative office in Vermont, affordability is an obstacle, Senate Majority Leader Clarkson says. The Legislature is in session from January to mid-May, and the pay is $742.92 per week.

Last year, before COVID-19 hit Vermont, a paid family leave proposal last year failed when a veto override came up short by one vote. This year, paid family leave bills have been introduced in the Vermont House and Senate. The Biden administration has proposed universal paid sick days and 12 days of paid family and medical leave.

With the Legislature working remotely, crafting complex legislation like paid family leave can take longer than usual, according to House Majority Leader Long. “I’m hoping that the federal government is going to step up and prioritize this,” she says.

Speaker Krowinski, the outgoing executive director of Emerge in Vermont, says women approached about running for office often ask about the work-life balancing act. To help, Speaker Krowinski says the state is looking at changing rules to allow candidates to use fundraising dollars to pay for child care during campaign events, many of which happen in the evening.

Changes like that may help pave the way for more women to join the 150-member House and the 30-member Senate. Along with gender balance, Ms. Balint is also concerned about the age gap.

“Just look at my chamber,” the Senate president says. “One-third of the seats are taken up by women, and the vast majority of people are in their 60s or 70s. It’s not representative of Vermont as a whole.”

According to 2019 federal government data, the state is 50.6% female and 20% of the population is 65 or older. In 2020, 40% of Vermont legislators were women, in a year when that percentage saw a slight increase nationally, reaching just over 29%, according to data from the National Conference of State Legislatures.

There are a number of bills in the Legislature this year intended to address racial equity issues. Also, in recognition of the need to address systemic racism in state government, a Cabinet-level position and racial equity advisory panel were created in 2019.

Yet while legislative posts are important, so is local politics. Ms. Clarkson also encourages women to seek public office in their communities.

“I can think of far too many select boards in Windsor County that are all male, and that is not representative of the populations in those towns,” Ms. Clarkson says, referring to her home county.

In fact, a number of legislative leaders credit local experience with preparing them for higher office. That’s true for House Minority Leader Pattie McCoy, who was town clerk and treasurer in Poultney for 26 years before being elected in 2014. Now in her fourth term, Ms. McCoy became assistant minority leader on her way to her party’s top job in the House.

“I was mentored by my male colleagues in actually taking over as House minority leader two years ago,” she says. “I was never discouraged from doing it, just the opposite. They asked me.”

Ms. McCoy acknowledged Emerge has done well for the Democratic side, and adds that 3 out of 8 new Republican members are women.

Vermont’s leadership milestone also reflects what’s happening on a national level. And as that glass ceiling continues to break, Vermont may also stand out when it comes to working across the partisan divide. It’s often said Vermont is like a small town: Everyone’s a friend of a friend. People disagree, but they have the debate, and usually friendships can remain intact afterward.

Legislative leaders are optimistic about the session and their ability to work with Republican Gov. Phil Scott to get Vermont through a challenging 2021. Rife partisanship is more of an issue nationally, Ms. McCoy says.

“I don’t think you see a contentiousness between parties as you do at the national level,” Ms. McCoy notes.

Ms. McCoy and Ms. Long, while on different sides of the aisle, both started their first terms in January 2015 and, though disagreements happen, they’ve enjoyed a strong working relationship.

“We don’t get anything done without supporting each other in this work,” Ms. Long says. “And we’re going to continue to do that.”