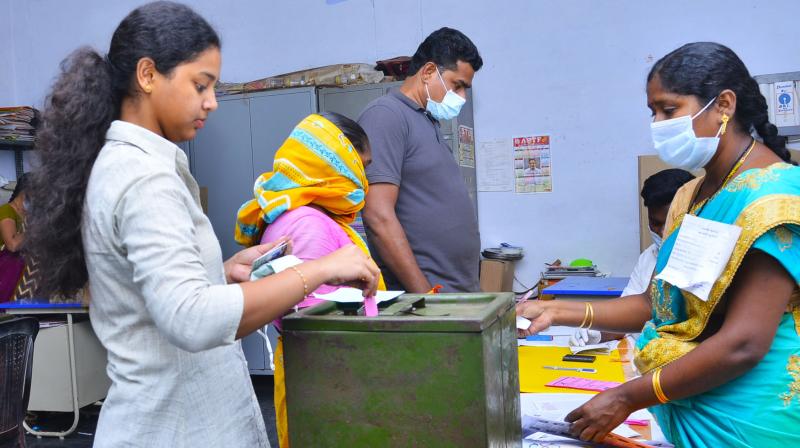 VIJAYAWADA: The urban local bodies elections have turned into a big fight between the ruling YSR Congress and the Opposition, with the YSRC banking on positive votes and its rivals hoping to reap a harvest of anti-government votes.

The withdrawal of nomination would start on March 2 and end on March 3 while elections would be held on March 10. There were 12 municipal corporations in 13 districts of the state covering 671 divisions.

Similarly, there were 75 municipalities and nagar panchayats with 2,123 wards where elections are scheduled for March 10. The ruling YSRC with the credit of winning 82 per cent seats in the gram panchayat elections are putting all efforts to continue the winning spree.

It hopes to cash in on the positive factors like the state government’s welfare schemes. Telugu Desam and other Opposition parties are pinning their hopes on anti-government sentiments among sections of the people.

As many as 6,103 candidates have filed their nominations for 671 divisions under the 12 municipal corporations of Vijayawada, Visakhapatnam, Guntur, Machilipatnam, Eluru, Vizianagaram, Anantapur, Kurnool, Kadapa, Tirupati, Chittoor and Ongole.

YSRC ministers Botsa Satyanarayana, Kurasala Kannababu, Peddireddy Ramachandra Reddy, Perni Venkataramaiah, Vellampalli Srinivas Rao and others claimed that a majority of the families got benefits from the multiple welfare schemes. At least one welfare schemes reached every family, and this “increased the trust of the people on the YSRC government.”

They recalled that Chandrababu Naidu had earlier released a manifesto for gram panchayat elections but the public dismissed it as a gimmick and supported the YSRC-backed candidates. Single nominations were filed for 84 wards and divisions in the municipal elections and the TD filed nominations only in Pulivendula, Jammalamadugu and Macherla municipalities. This reflected the political bankruptcy of the main Opposition party, they said.

The leaders said the YSRC government has lost several legal battles but it is winning the ballot war with the support of the public. “We hope we would continue the winning spree in the municipal elections with the positive votes.”

On the other hand, the TD claims urban voters are its traditional supporters and a majority of the urbanites are up-in-arms against the government for the increase in taxes post-the Covid times. TD MP Kesineni Srinivas alias Nani said several taxes have been increased by the YSRC government and it is planning to hike the property tax, water cess, garbage collection charges etc by nearly 500 per cent after the municipal elections.

“Employment in urban local bodies is largely hit due to a shortage of sand, as also increased prices of cement, iron, steel and other construction materials. The people are waiting for their turn to teach a strong lesson to the YSRC government and they are hoping to win municipal elections with a profusion of anti-incumbency votes.

Political analysts say the main fight at the hustings is between the YSRC and the TD. The other parties would be “extras”. They said urban voters are traditionally supporters of the TD but this trend changed in the 2019 elections. Hence, there are chances of the ruling party re-registering the 2019 sweep in the 2020 municipal elections.