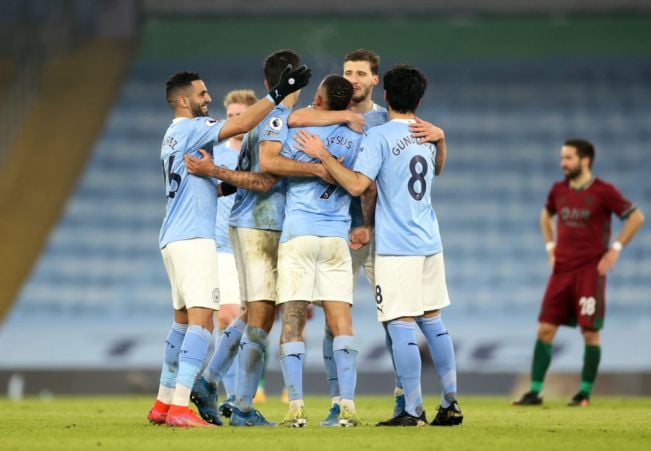 Manchester City extended their winning run to 21 games with a 4-1 victory over Wolves on Tuesday night – and could now climb the all-time record list in Sunday’s Manchester derby.

Only four top-flight teams in Europe have had longer winning runs in all competitions than City’s current sequence and victory over Manchester United would take them alongside Real Madrid in fourth place.

Ajax held the record for 44 years with 26 until Welsh side The New Saints won 27 in a row in 2016 – a mark recognised by Guinness World Records.

Here, the PA news agency takes a look at football’s 20-plus game winning runs, with Real and then Bayern Munich the first teams in City’s sights.

When history was made. The ball's in the back of the net and TNS are in the @GWR having eclipsed the official record, held by Ajax. pic.twitter.com/mtZaF03IOV

A routine 2-1 win over Aberystwyth Town did not indicate history in the making but when TNS followed it up by beating Llandudno 5-0 and Rhyl 10-0, they were firmly up and running.

They won their first 21 league games en route to their sixth of eight successive titles, with wins in the Welsh Cup and League Cup and even two as an invited team in Scotland’s Challenge Cup, against Forfar and Livingston, adding to the run.

Back-to-back wins over Cefn Druids saw them equal the record on Boxing Day and break it four days later, scoring 88 goals in the 27 games while conceding only 13.

Individual match statistics are harder to come by for the Eredivisie in the early 70s but what is not in doubt is the dominance of Stefan Kovacs’ side as they won a domestic and European treble.

Led by Johan Cruyff at the peak of his powers, they won 30 of 34 Eredivisie games – including every one at home – as they captured the title that had eluded them the previous season. Their winning run, which lasted from October to March, also included two-leg wins over Marseille and Arsenal on their way to the second of three straight European Cup triumphs.

Bundesliga, Champions League and DFB Pokal glory was secured in swaggering style, with the run perhaps all the more impressive for being unhindered by the interruption of the season due to the coronavirus pandemic.

The 8-2 win over Barcelona in the Champions League quarter-finals was the standout result, with Schalke also on the receiving end of eight goals. Bayern scored six against Hoffenheim and five against both Eintracht Frankfurt and Fortuna Dusseldorf as well as beating Bayer Leverkusen 4-2 in the domestic cup final and Paris St Germain 1-0 in the European showpiece.

A shock 4-1 loss to Hoffenheim ended the run – and was all that prevented a comfortable new record, with Bayern responding to that setback by winning another 10 in a row.

Real scored a remarkable 81 goals in the 22 games, a run kick-started in explosive style by beating Basel 5-1, Deportivo La Coruna 8-2 and Elche 5-1.

Athletic Bilbao, Levante, Rayo Vallecano and Segunda Division B minnows Cornella also conceded five-goal hauls though the only silverware of the season for Real was the UEFA Super Cup and the Club World Cup.

The latter competition accounted for the last two games of the winning run, against Cruz Azul and San Lorenzo in December 2014, before Valencia’s 2-1 win ended the fun in the new year.

Raheem Sterling’s winner against Southampton back in December set Pep Guardiola’s side on their way and a Carabao Cup rout of Arsenal saw them hit top form.

They have conceded only eight goals in the 21 games to date, and never more than one in a game, with Sky Bet League Two Cheltenham arguably coming as close as any opposition to ending the run when they led 1-0 in the FA Cup before City scored three times from the 82nd minute onwards. Wolves and Conor Coady also threatened to spoil the party with an equaliser in an eventual 4-1 scoreline.

Midfielder Ilkay Gundogan leads the City goalscorers with 10 goals in the winning run while Gabriel Jesus’ brace against Wolves took him to eight, with 15 goalscorers in all and 27 players used.