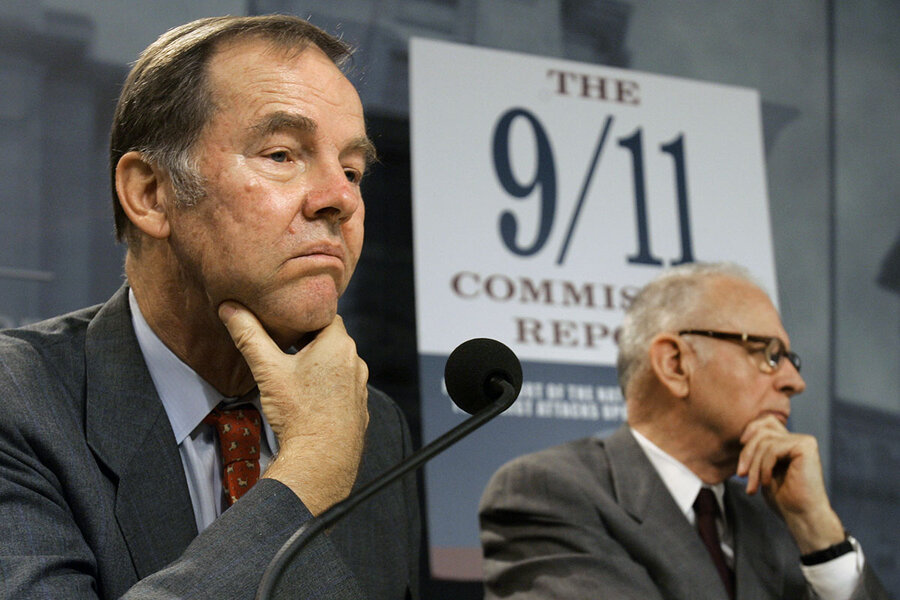 Jamie Gorelick, the former No. 2 in the Clinton Justice Department, found herself sitting next to Slade Gorton, who had served as a Republican senator and attorney general of Washington state.

After the two lawyers talked for a while, Ms. Gorelick told Senator Gorton that her Democratic friends had warned her to watch out for him, because he was highly partisan. “Funny,” she recalls the late senator responding. “My Republican friends told me the same thing about you.”

“And that was the beginning of a really good friendship,” says Ms. Gorelick in a phone interview. Mirroring the leadership of Chairman Tom Kean and Vice Chairman Lee Hamilton, they became a backbone of bipartisan cooperation on the commission, which went on to produce a unanimous report and saw nearly all of its 41 recommendations implemented.

Now that commission is being held up as a model for an investigation into the Jan. 6 attack on the U.S. Capitol. On Feb. 15, after the Senate acquitted former President Donald Trump of inciting the riot as Congress met to certify the Electoral College results, House Speaker Nancy Pelosi announced that Democrats’ next step would be to establish “an outside, independent 9/11-type Commission” to report on the facts and causes of the attack.

Many facts relating to the events of Jan. 6 remain unclear, with not a single Capitol Police media briefing to date and relatively little public information from the FBI or other law enforcement agencies. A joint Senate committee last week questioned top leaders in charge of Capitol security, who resigned in the wake of the attack, and the committee met again on Wednesday to hear from top officials from the FBI and the Department of Homeland Security.

Yet there are far greater hurdles to establishing a 9/11-style commission today – first and foremost being the intensified partisan atmosphere. The domestic nature of the Jan. 6 attack, in contrast with a foreign Al Qaeda plot, could also make it harder to create a unified approach. Since it occurred at the Capitol, party leaders themselves could be blamed for not ensuring better security, making the political stakes much higher. Indeed, while there was always the likelihood that the 9/11 Commission could reflect badly on the Bush administration, detailing how it failed to foresee and forestall Al Qaeda’s plot, House Democrats have already impeached former President Trump for inciting the Jan. 6 attack.

And early maneuvering has not indicated as strong a commitment to bipartisan investigation as with the 9/11 Commission, half of whose members were Democratic appointees and half Republican. Senate Minority Leader Mitch McConnell has thrown cold water on the whole idea. Speaker Pelosi has proposed a commission of 11 members, just four of whom would be Republicans. Other Democrats in Congress have called for a more balanced partisan representation.

Still, despite all the apparent obstacles, five key players from the 9/11 Commission interviewed by the Monitor each said they believed it would be possible to establish a similarly effective bipartisan group to investigate the Jan. 6 attack and establish a factual accounting.

The commission would need to have a clear mandate and limited scope, focus on fact-finding, and be given the time and resources to do a thorough job. The most important thing, they emphasized, would be finding the right people. People with sterling reputations. People who will respect each other. People who are looking for solutions.

“If there’s even one person on the commission … who isn’t willing to put country above party, it’s not going to work,” says former New Jersey Governor Kean, the Republican who chaired the 10-member commission.

“There are all kinds of commissions in Washington; they form them every day,” adds Mr. Hamilton, the former Indiana congressman who was the commission’s vice chair. “But the ones that really have impact are ones that are genuinely bipartisan.”

To be sure, the 9/11 Commission was not without its controversies. Despite the collective shock of 9/11, and the national push for answers and accountability, it took more than a year for Congress to pass a bill establishing the commission. Some involved were criticized for perceived conflicts of interest. Its work was slow, culminating nearly three years after the attacks.

Governor Kean was perhaps an unorthodox choice to chair the group. The Republican had comparatively little experience in the realm of intelligence and national security. But he knew something about bipartisanship. When he became New Jersey governor, both chambers of the state Legislature were controlled by Democrats. He had also chaired a national wetlands commission, bringing parties ranging from oil interests to environmental groups into agreement.

Mr. Hamilton, the vice chairman, had led the House Committee on Foreign Affairs for years. Mr. Kean told him right off the bat that everything they did, they would do together.

When “Meet the Press” host Tim Russert called the new chairman and invited him on his show the following week, Mr. Kean agreed, but said he’d appreciate it if Mr. Hamilton could join him. He recalls Mr. Russert responding that guests don’t pick guests in Washington. “I said, ‘OK, then get somebody else.’”

Shortly thereafter, Mr. Kean got a call back inviting both men to come on the show.

On the first day the commission met, the Democrats were huddled in one corner and Republicans in the other – like a fourth-grade square dance, says Alvin Felzenberg, a former Kean deputy who became the commission’s spokesperson. There wasn’t a lot of optimism that they would be able to work together effectively.

“The expectations were: Either the commission would deadlock, or it would be so watered down that it wouldn’t be worth very much,” Mr. Felzenberg says.

Mr. Hamilton said he looked for similar qualities in potential commissioners, over whose appointment he had indirect influence. Pragmatism and flexibility were key, as was an understanding of the importance of unanimity.

“I think they also understood the converse of that – if we split all over the place, the recommendations would not have any force,” he says.

An indication of the commission’s cohesiveness came in the second month of hearings, when then-Attorney General John Ashcroft declassified a memo Ms. Gorelick had written while at the Department of Justice and accused her of establishing a policy that restricted intelligence sharing, thus preventing agencies from foreseeing the 9/11 attacks. Ms. Gorelick and her allies, who characterized the memo as simply a clarification of long-standing DOJ policy, saw the attack on her as an attack on the commission as a whole. Senator Gorton, the Republican from Washington state who had sat next to her at that first dinner, was the first to jump to her defense.

“I knew at that point that the commission was one,” says Governor Kean.

Still, there were heated discussions. “You can’t force unanimity,” says Mr. Hamilton. “If it comes at all on controversial topics, it comes after a lot of discussion.”

Chris Kojm, the deputy executive director of the commission, recalls a discussion about a draft chapter involving the bombing of the USS Cole in the fall of 2000. Seventeen sailors had died, and neither the Clinton nor the Bush administrations had responded militarily. The commissioners came to agreement by stripping it down to a bare-bones description of the chronology of events.

“It is noun, verb, description of action. No adjectives, no characterization,” says Professor Kojm, who now teaches U.S. foreign policy and national security at George Washington University’s Elliott School of International Affairs. “That frankly became the editorial tone of the commission report. … It studiously avoided assigning blame. You’ll never find a sentence that says it was Bush’s fault or Clinton’s fault. There was a very careful dedication to the factual record.”

Despite the careful laying of a bipartisan groundwork and the patience to talk through policy differences, Mr. Hamilton recalls driving home to Northern Virginia on several occasions at 3 or 4 a.m., thinking that they would never reach an agreement. Mr. Kean says it wasn’t until the last week that it became clear they would produce a unanimous report.

The report came out in July 2004 as the presidential race was heating up. Unlike other reports produced by various Washington commissions over the years, the 537-page tome debuted as the No. 2 book on a paperback bestseller list. People read it on the subway and in airports while waiting for their flights.

Both President George W. Bush and Democratic nominee John Kerry endorsed the report’s findings and recommendations, which included creating a new Department of Homeland Security and a director of national intelligence, to whom all the intelligence agencies would report – a move the agencies resisted.

That reconfiguration would also require a redistribution of oversight among congressional committees, meaning that some members of Congress who had spent 15 or 20 years building seniority would suddenly be stripped of some of their oversight powers.

In the end, nearly all members of Congress supported the commission’s 41 recommendations. A 10-year report card co-chaired by Mr. Kean and Mr. Hamilton identified only three recommendations as unfulfilled, with half a dozen needing improvement.

Families who lost loved ones in the attack were crucial in pressuring both the intelligence agencies and members of Congress to accept the changes, says former Rep. Chris Shays, a Connecticut Republican who had 70 constituents killed in the 9/11 attacks and co-chaired the congressional caucus that pushed for the commission’s establishment and built support for its recommendations. The relatives held vigils, rallies, and press conferences; visited members of Congress; and faxed endless letters to them.

“You had the families say, ‘OK, Congress, you may not want to give up some of your activities and oversight, but we need to make sure there is a Department of Homeland Security,’” says Mr. Shays, who went to many of the funerals, where he repeatedly heard from relatives who wanted to see something positive come out of the attacks. “Without the families, I don’t know if you would have seen the kind of success we saw.”

Indeed, a number of those interviewed say it is unclear whether such pressure could be brought on Congress to investigate the Jan. 6 attack, which has been blamed for the deaths of five people, though the circumstances of some of those deaths remain unclear.

Mary Fetchet, who lost her son Brad in the twin towers and was one of the most prominent relatives advocating for the 9/11 Commission and Congress’s approval and funding of its recommendations, says there should be a similar national demand for accountability in the wake of Jan. 6.

“I think as a country we should be as horrified by the attacks on the Capitol as we were about 9/11,” says Ms. Fetchet, executive director, Voices Center for Resilience (formerly Voices of September 11th). “It’s critical to be just as concerned about domestic terrorism as we are about the attacks on 9/11. … And so I’m hoping that there is a campaign to really create a 9/11 Commission-like body. But they have to work in a bipartisan manner.”