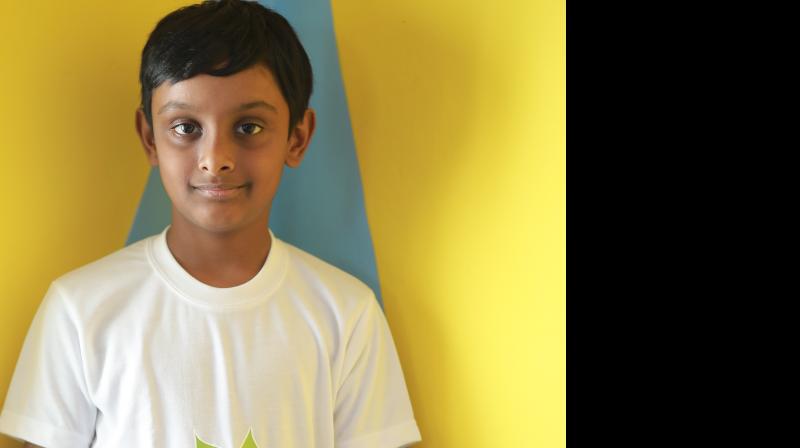 When a then 7-year-old Rangesh Vel joined a kidpreneur course based on his parents’ suggestion, little did he know that in three months he would launch his first venture. “My parents asked me to join the course and told me that after a while if I didn’t like it, I could quit,” recalls the now 10-year-old Rangesh. “I met many people through the course and we discussed ideas. I started thinking of problems and solutions. At that time, I had noticed lots of trees being uprooted and I was looking for an effective solution. That’s how I thought of seed balls.”
Today, Rangesh runs a company called Life Seedz, which sells seed balls. “Seed balls are nothing but mud balls with a seed in them and it helps trees grow faster. In two to three months, we thought of a name of the company and a tagline, and designed a logo with the help of our mentors,” he says.

So far, Life Seedz has created and sold close to 2,500 seed balls. “I am saving up money as I want to hire a helicopter and use it to scatter the seed balls. I am also learning AI programming so that we can use drones to identify areas where seeds can germinate. I am also planning a new idea where on someone’s birthday, they can contribute to Life Seedz, and we will plant trees on their behalf,” says a clearly excited Rangesh.

The course that Rangesh enrolled in was conducted by a company called Kidspreneur, started by Mohanalakshmi and her husband in 2017.
“When I was growing up, I hated the education system,” shares Mohanalakshmi, talking about what prompted her to start Kidspreneur. “I realised that your study is most often not related to your work. I believe gaining practical knowledge is what makes the difference.”

Kidspreneur trains kids from seven to eighteen years in entrepreneurship skills in science, technology, math, arts and more. “We have partnered with 320 schools across Asia and have trained about 15,000 students. Outside school partnerships, we’ve given in-person training to 5,000 to 8,000 students,” she states, adding that once they help kids find an idea and give shape to their idea, they help them get investors who help turn their idea into a venture.

Today, many organisations have entered the market of creating kidpreneurs, finding several takers among parents. Mahalakshmi Saravanan, who successfully runs Women Entrepreneurs India, started Kidpreneurs India, inspired by her 5-year-old daughter. “She is a good artist and I thought I could encourage other children through her. My daughter would create artworks and as she grew up she started designing jewellery as well. We sold her works and used the money to help pay the school fees of underprivileged kids,” says Mahalakshmi. They soon started encouraging and mentoring other children too. “We have done many workshops to understand the ideas that kids have and mentor them and give them a platform. We will soon have a structured curriculum and help a lot more kids,” she says. Bornpreneurs, another such platform started by Anuj Tripathi, gives entrepreneurship training to kids eight years and above.

“Many kids want to become entrepreneurs but do not know what it entails. We have a programme that takes them through the different steps, helps them understand business, marketing, how to create business pitches and understand the whole process,” he says. And it goes beyond entrepreneurship, insist the founders. Mohanalakshmi believes the course gives the students important life skills. “Every kid has an entrepreneurial streak; we only help give it a platform. Besides, it improves their self-confidence and their creativity,” she says. Mahalakshmi adds that it makes kids better decision makers. “It gives them a lot of life skills. They actually become better, more responsible individuals,” she says.

While the organisations believe they are an important path for kids to become successful entrepreneurs, not all child entrepreneurs agree. For instance, Farrhad Acidwala, one of India’s most successful young entrepreneurs, started at the age of 13, by building an online community dedicated to aviation and aero-modelling. The now 27-year-old media entrepreneur, investor, three-time TEDx speaker, mentor and influencer feels that more than teaching entrepreneurship, it is important to develop curiosity in kids. “Also, not every kid wants to be an entrepreneur. So, the most important thing is to develop curiosity in them. One shouldn’t teach them what to learn, but how to learn,” he says adding, “If a course is extremely process-oriented, I would say stay away from it, but if it lets the kid be curious, give it a try. The most successful kidpreneurs I know were the ones who were sparked by passion and curiosity. As for the kidpreneur courses… considering the lack of depth in genuine reviews and results right now — I feel it is ethically questionable to push this en-masse on 7–8-year-olds.”

Vinisha Umashankar, a 14-year-old from Tamil Nadu, who recently won the prestigious Children’s Climate Prize for her solar mobile ironing cart, believes an idea is important to drive a person to become an innovator, but such courses can definitely help to hone the idea. “When I saw the amount of charcoal that was being dumped into sewers and landfills, it disturbed me. I also saw the fumes coming from the ironing carts and wondered how harmful it was, not only for those using it but also for the environment. This drove me to look for an effective solution,” she says. “I think the idea and path are both important. It depends on what drives you and what kind of start-up you want to build,” says Vinisha, who is soon hoping to get a patent for her creation.

Farrhad also believes that at the right time in their developmental cycle, we have to give our next generation the tools to think. “We shouldn’t be teaching them what to think. This isn’t the industrial age where we need to create mass professionals. Now, more than ever, in the age of AI, we need creative and critical thinkers,” he says. “I, personally, do not see myself ‘teaching entrepreneurship’ to pre-teens. It doesn’t feel right. But training those in ages 16 to 24? Absolutely yes, if they are interested,” Farrhad says, signing off.