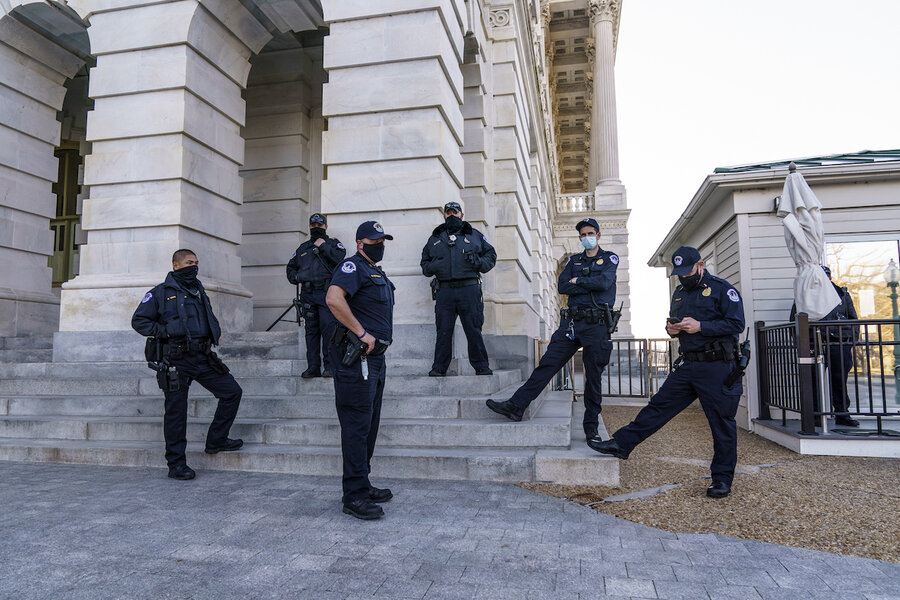 Many questions remain unanswered about the failure to prevent the Jan. 6 insurrection at the United States Capitol. But after six congressional hearings, it’s clear that the Capitol Police were unprepared and overwhelmed as hundreds of former President Donald Trump’s supporters laid siege to the building. It’s also clear that no one wants to take responsibility for it.

Officials who were in charge of protecting the Capitol, and the people inside it, have pointed fingers at each other in testimony to the House and Senate. Their deflections are indicative of the chaos of that day, the lack of intelligence leading up to the attack, and the fact that none of the law enforcement agencies involved imagined that so many of Mr. Trump’s supporters would actually violently lay siege to the Capitol with the mission of overturning his defeat.

So far, lawmakers have focused on the lack of clear intelligence about the plans of the rioters, given that Mr. Trump’s supporters openly discussed the insurrection online. They have also questioned military and law enforcement leaders about why it took more than three hours for the National Guard to get to the Capitol when the rioters were already inside.

Five people died as a result of the violence, including a Capitol Police officer and a woman who was shot by police as she tried to break into the House chamber through a broken window.

Here’s what we have learned so far about the failures that led to the Jan. 6 insurrection:

Broad failures across the board

Congress hasn’t pinned the blame on any one agency or official as it investigates the riot, as it’s obvious there were failures on all levels. The rioters easily broke through police barriers and overwhelmed the officers who were there, injuring many of them, as the Capitol Police had planned for a much smaller event. The National Guard did not arrive for several hours after a mob of around 800 people broke the doors and windows of the Capitol, entered the Senate shortly after it had been evacuated, and tried to beat down the doors of the House with lawmakers still inside.

As all of that was happening, law enforcement and national security officials at multiple agencies have described frantic pleas for help from Capitol Police that were followed by layers of required approvals, conversations about optics, and the logistics of hastily readying a response.

Capitol Police officials made clear that they never envisioned anything close to the scope of what happened. “We had planned for the possibility of violence, the possibility of some people being armed, not the possibility of a coordinated military-style attack involving thousands against the Capitol,” said former chief Steven Sund, who was ousted from his job the day after the attack.

The acting Capitol Police chief, Yogananda Pittman, told a House appropriations subcommittee in February that the force “failed to meet its own high standards as well as yours.” She listed several missteps: not having enough manpower or supplies on hand, not following through with a lockdown order she issued during the siege, and not having a sufficient communications plan for a crisis.

But she has also defended their role and suggested police couldn’t have known how bad it would be.

In the hearings – so far two in the Senate and four in the House – most every official has deflected responsibility, blaming either the intelligence failures, the Pentagon for failing to send the National Guard more quickly, or each other.

Mr. Sund described the difficult process of navigating the Capitol Police Board, which includes the two officials in charge of security for the House and Senate and the Architect of the Capitol. The House and Senate sergeants-at-arms, who were both forced to resign immediately after the rioting, have given conflicting accounts of the conversations the day of the riot, and in the days before, as Mr. Sund begged for National Guard support.

Multiple law enforcement officials, including Mr. Sund, Robert Contee, the acting chief of police for the Metropolitan Police Department, and Maj. Gen. William Walker, commanding general of the District of Columbia National Guard, have blamed Pentagon officials for delaying for around three hours as they sought approval for National Guard troops.

At a hearing on Wednesday, Mr. Walker told senators that Mr. Sund requested troops in a “voice cracking with emotion” in a 1:49 p.m. call just before rioters broke into the Capitol. He said he wasn’t notified of approval until 5:08 p.m.

A senior Pentagon official, Robert Salesses, testified that it took time for the Army to sort out what the National Guard was being asked to do and what its support might look like, especially since the Capitol Police days earlier had not asked for any help. Military officials were also concerned about the optics of a substantial National Guard presence at the Capitol, and that such visuals could inflame the rioters, Mr. Walker said.

“Three hours and 19 minutes,” noted Ohio Sen. Rob Portman, the top Republican on the Senate Homeland and Governmental Affairs Committee, one of the two panels that conducted the hearing. “That can’t happen again.”

All of the law enforcement officials have blamed failures of intelligence, saying they didn’t realize the severity of the threat, even though extremists were planning some of it openly online.

Many of the questions have centered on the FBI’s handling of a Jan. 5 bulletin from its Norfolk, Virginia field office that warned of online posts foreshadowing a “war” in Washington the following day. Capitol Police leaders have said they were unaware of the report at the time, even though it had been forwarded to the office.

The Capitol Police also did its own intelligence assessment warning that Congress could be targeted on Jan. 6. But that report assessed the probability of civil disobedience or arrests, based on the information they had, as “remote” to “improbable” for the groups expected to demonstrate.

Four House committees are probing what went wrong with that data collection, including the House intelligence committee. California Rep. Adam Schiff, the chairman of that panel, said his impression is that those failures “contributed to the tragedy on Jan. 6.”

“We need to answer the question why and what do we need to do differently,” Mr. Schiff said in an interview this week.

Everything but Mr. Trump

The congressional investigations have picked up speed in the wake of the Senate’s acquittal of Mr. Trump in his impeachment trial, where he faced a charge of inciting the insurrection. While Democrats – and even some Republicans – believe that Trump is ultimately responsible for the attack, it is clear after his acquittal that there are not the votes in Congress to officially lay the blame on the former president and prevent him from running for office again.

As a result, Congress is focusing on the security failures that day, and how law enforcement and the military could have been better prepared. The House Oversight and Reform Committee is investigating how right-wing social media could have contributed to the attack, and the Senate Judiciary Committee is looking at extremism.

Senate Intelligence Committee Chairman Mark Warner said his committee will look at extremism around the world – a problem that began long before Mr. Trump’s supporters broke into the Capitol. He says he thinks he could get bipartisan support for the probe even despite the “broad ideological breadth” of senators on the committee.

“I don’t want our committee’s examination to be about Trump or about Jan. 6,” Mr. Warner, D-Va., said in an interview. “This is a problem that didn’t start on Jan. 6.”

With the committee probes just begun, it’s unclear how the Capitol will return to normal – or what steps will be taken to prevent another attack. Thousands of National Guard troops still guard the Capitol, which is now surrounded by fencing and barbed wire and closed off to the public.

Lawmakers have talked about legislation to overhaul the Capitol Police Board, but that could be far off, likely after the investigations are complete. Senators in both parties have said that they will likely want to talk to more Pentagon officials to understand how the National Guard was delayed for so many hours.

“Any minute that we lost, I need to know why,” said Senate Rules Committee Chairwoman Amy Klobuchar, D-Minn.