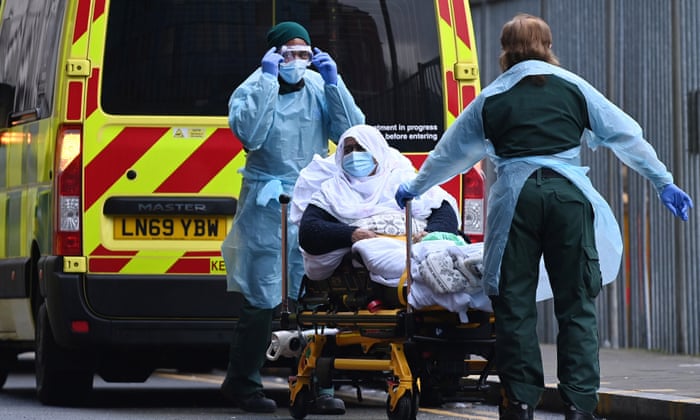 Countries with high levels of overweight people, such as the UK and the US, have the highest death rates from Covid-19, a landmark report reveals, prompting calls for governments to urgently tackle obesity, as well as prioritising overweight people for vaccinations.

About 2.2 million of the 2.5 million deaths from Covid were in countries with high levels of overweight people, says the report from the World Obesity Federation. Countries such as the UK, US and Italy, where more than 50% of adults are overweight, have the biggest proportions of deaths linked to coronavirus.

The issue is not just obesity, but levels of weight that many assume are now normal in many countries. Death rates are 10 times higher in those where more than half the adults had a body mass index (BMI) of more than 25kg/m2 – the point at which normal weight tips into overweight.

People who are overweight should be given greater priority for vaccinations and tests because of their increased risk of death, says the World Obesity Federation.

Among countries where more than half the adult population is overweight, Belgium has the highest level of deaths, followed by Slovenia and the UK. Italy and Portugal are 5th and 6th, while the US is 8th.

Vietnam, by contrast, has the lowest lowest level of overweight in the population and the second lowest Covid death rate in the world.

The director general of the World Health Organization said the report must act as a wake-up call to governments globally to tackle obesity and the poor health it causes.

“The correlation between obesity and mortality rates from Covid-19 is clear and compelling,” said Dr Tedros Adhanom Ghebreyesus.

“Investment in public health and coordinated, international action to tackle the root causes of obesity is one of the best ways for countries to build resilience in health systems post-pandemic: we urge all countries to seize this moment.”

The biggest factor in the death toll is age, says the report, but being overweight comes second. It is already known to increase people’s risk when they contract infectious diseases such as flu.

“We were shocked to see such a high correlation between a country’s proportion of overweight adults and its deaths from Covid-19,” said Dr Tim Lobstein, the report’s author and former adviser to the WHO and Public Health England.

“We knew there was a problem in a few countries, but we found it was remarkably consistent across the globe – with just a few outliers like New Zealand and Iceland, where they have taken strong measures to protect a vulnerable population.”

The results allow for age and are not skewed by poor data from some countries, said Lobstein. Deaths tend to be reported accurately even if hospitalisations are not. They adjusted for GDP and found income levels did not play a part either. “There are rich countries with low levels of overweight, like Japan and South Korea, and they have very low Covid death rates. Equally, there are lower-income countries like South Africa and Brazil, where overweight is now affecting more than half the population, where we see high Covid-19 death rates,” he said.

“We now know that an overweight population is the next pandemic waiting to happen,” said Lobstein.

“Governments have been negligent, and ignored the economic value of a healthy population at their peril. For the last decade they have failed to tackle obesity, despite setting themselves targets at United Nations meetings. Covid-19 is only the latest infection exacerbated by weight issues, but the warning signs were there.”

Most countries are set to miss the UN target of halving the increase in obesity levels between 2010 and 2025. “It appears governments want to avoid taking on the commercial interests in food and agriculture. Like global heating and ocean pollution – the problem needs worldwide leadership, ensuring that industry and the market are there to serve people’s health and the health of the planet,” he said.

It was a tough call for individuals, because losing weight is very hard. “People make a living selling individual weight plans, and weight-loss products, but in a society like ours, with its incentives for cheap food consumption and its rising inequalities, personal products are obviously not enough,” he said.

Michael R Bloomberg, WHO ambassador for noncommunicable diseases and injuries, said the results “underscore the importance of fighting obesity around the world, including in lower- and middle-income countries where rates are rising fastest. We’ve seen the positive impact healthy food policies have in dozens of countries, and together we can make even more progress saving and improving lives.”