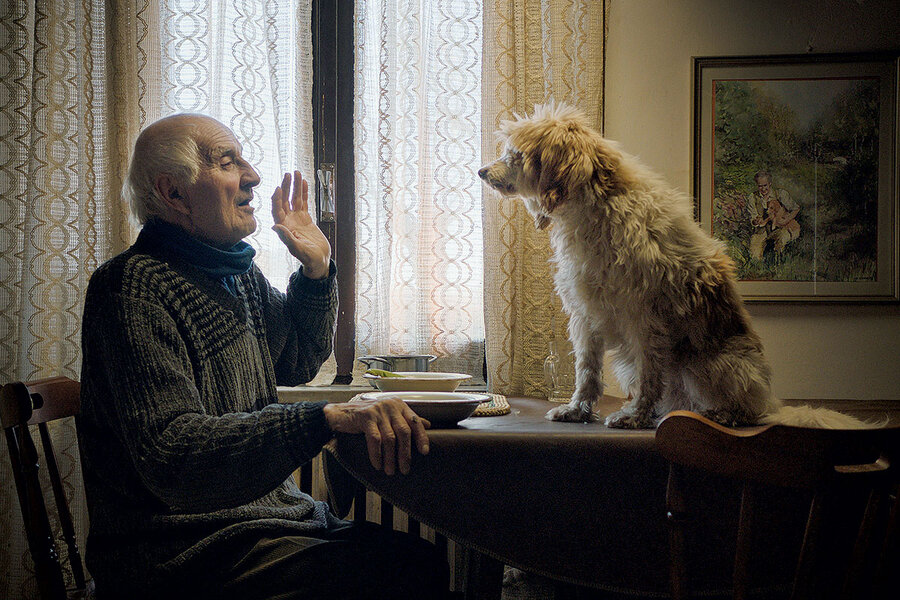 Being neither a gastronome nor a fan of foodie films – they make me hungry! – I was reluctant to see a documentary called “The Truffle Hunters.” On the other hand, it turns out that truffles – basically mushrooms with a really expensive price tag – are tracked in the woods by dogs specifically trained by their owners to sniff them out. Since I’m a dog lover, this was good news.

So is the movie, directed by Michael Dweck and Gregory Kershaw. Shortlisted for an Oscar, it focuses on a vanishing subculture of largely octogenarian male truffle hunters in the Piedmont forests in Northern Italy where the most prized specimens are to be found.

Among the cadre of codgers is Carlo who, much to the consternation of his hypernervous wife, still makes forays into the forest with his beloved dog Titina. He especially likes to go out at night because he loves hearing the hooting of the owls.

There’s also Aurelio, a bachelor whose piebald soul mate, Birba, with her renowned nose for truffles, is his greatest joy. He takes bubble baths with Birba, then blow-dries her. He shares meals, peeling pears for her. He sings to her. He confesses to her his fears about what will happen to her when he dies. He decides he needs to meet a “wild woman” who will take care of her. Birba takes it all in philosophically.

Aurelio is asked early on by a much younger truffle hunter if he wouldn’t mind divulging his secret spots in the forest. After all, the young man argues with apparent sincerity, why let all that hard-won knowledge be forever lost? Aurelio’s response is “Never!” He is as cranky with humans as he is loving with Birba.

Then there’s Angelo, who is so curmudgeonly that he makes Aurelio seem angelic by comparison. A master truffle hunter with a striking resemblance to Rasputin, he lives alone in the forest and no longer plies his trade because he believes, not entirely without cause, that it’s been overtaken by unscrupulous merchants and poachers, some of whom poison rival dogs. At one point we see him tapping out a screed on his ancient manual typewriter, looking like nothing so much as a chain-smoking mad monk. In one of his rare light moments, Angelo tells an acquaintance that he used to be a circus acrobat. He claims he turned down 50 marriage proposals. Part of his appeal, apparently, was his expertise in walking on stilts.

I would like to have learned more about the younger lives of these men. Doing so would have deepened the portraiture. As it is, what we are presented with is essentially a boisterous gallery of aging oddballs. But to their credit the filmmakers never make fun of them. Their eccentricity, because it is rooted in a passion for the natural world, has an innate dignity.

The men come off favorably compared with the merchants and auctioneers also featured in the film. One of the buyers is shown eating lunch with his young daughter as he explains to her that he never eats truffles because basically it’s all just a business to him. At various times we overhear him with hunters as he lowballs the price of their truffles. Then we see the hunters’ large, knobby, white bounties laid out for top dollar in tony auctions.

But I don’t wish to characterize the film as some kind of upper-class versus working-class indictment. It’s more complicated than that. What I ultimately took away from the documentary is the deep love that can exist between owners and their dogs. In “The Truffle Hunters,” both are shown to be the custodians of each other’s happiness. When Carlo, bucking his wife’s admonition, sneaks out through an open window with Titina to savor the night forest, the nutty bliss of the moment suffuses the screen.