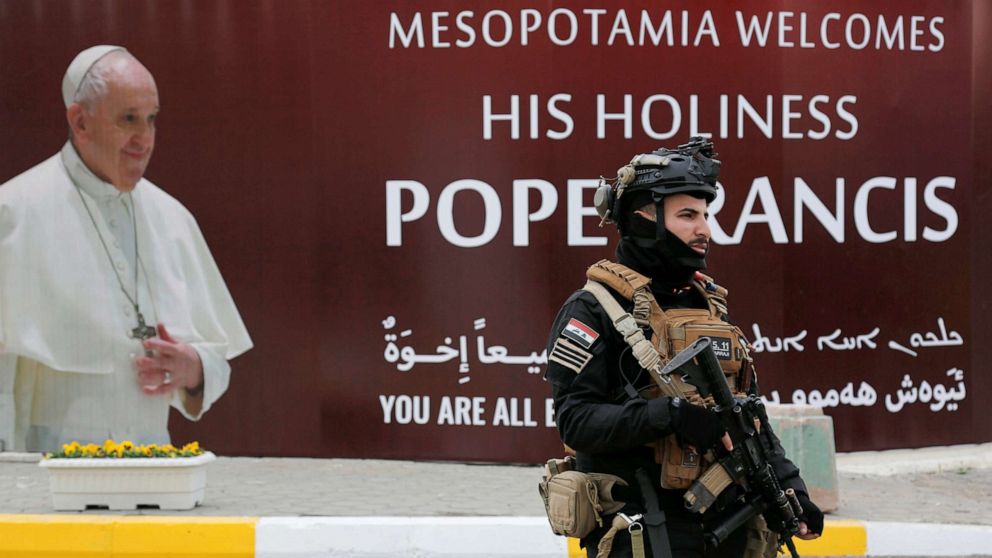 When the pontiff touches down in Baghdad on Friday, it will be the culmination of a Vatican trip decades in the planning.

Pope Francis will be the first pope to ever visit this area of great biblical importance — home to ancient civilizations. His trip is happening despite escalating violence, rising COVID cases and international concerns.

Questions about the timing of trip were raised repeatedly at a recent Vatican press conference. But it was the pope himself who addressed these concerns on Wednesday before his departure.

“The Iraqi people are waiting for us,” the pope said. “They awaited St. John Paul II who was not permitted to go. One cannot disappoint a people for a second time.”

St. John Paul II had tried without success to undertake this same trip to only be blocked by concerns of safety and political instability.

A resurgence in violent attacks has again forced the Vatican to address whether the pope’s visit is safe. Iran-backed militias have twice since the beginning of the year sent rockets into bases housing American and coalition forces. President Joe Biden ordered a retaliatory strike against a suspected insurgent bases in Syria after the first attack.

In a second assault, militants launched 10 rockets at the Al Asad airbase just days before the pope’s departure. The U.S. has reserved the right to respond at a time of its own choosing.

A twin suicide attack at central Baghdad market in early January stunned Iraqis after months of calm. The bombs killed 32 civilians and injured over 100. Demonstrations against the November government killings of protesters continue almost daily across the country. The unrest forced the previous prime minister to step down.

Despite the uptick in violence, the Vatican is confident the trip can move forward. It has said that Iraqi forces will be responsible for the safety of the pontiff, not international forces.

The church says the visit, which will last from March 5 to March 8, is to show support to the people of Iraq after years of violence. When the Islamic State swept through the north of the country in 2014 promising to establish its caliphate in Mosul, it nearly decimated the small Christian community that had survived under the Saddam Hussein regime. ISIS destroyed most of the churches and other Christian symbols before it was forced out and all but destroyed by coalition forces. The pope will pray for peace at the ruins of these churches in Mosul and hold a mass in the restored cathedral in Qaraqosh.

The pope wants to use this trip not only to support the Christian Iraqis, but to reach out to all the religious communities in Iraq. In Ur, the birthplace of Abraham, who is a prophet important to Christians, Muslims and Jews, the pope will hold an interfaith meeting that will include readings from the Quran. Members of all the main religious segments have been invited.

One of his most important visits will be with the head of the Shia community in Iraq, the revered Grand Ayatollah Sayyid al-Sistani, at his home in the holy city of Najaf. The 90-year-old cleric is rarely seen in public but his influence was instrumental in overthrowing Saddam Hussein.

The pope and his entourage will not have the usual large crowds attending ceremonies; Iraqi television channels will be covering all papal events live. The Vatican says it is organizing the trip with COVID mitigation efforts in mind. Most events will be before a small number of people with masks and social distancing is required. Every journalist accompanying the pope was vaccinated. The only large event, a mass at the stadium in Erbil, will be invitation only using only a fraction of the available seats.

Despite the risks, Francis is determined to make the visit in person.

“They will see that the pope is there, in their country,” he said.