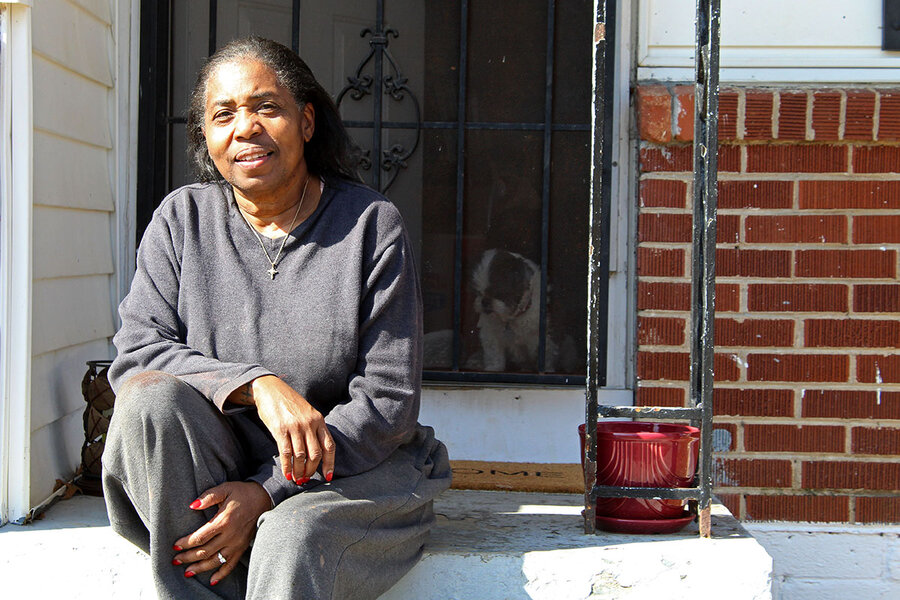 Cynthia Poe worries about getting squeezed out again.

She fled her no-longer-familiar neighborhood with its rising taxes late last year, only to land in the same situation in her new home: the majority-Black, working-class neighborhood of Grove Park in Atlanta. Once a thriving white community, Grove Park saw white flight in the 1960s. Redlining by banks and other financial institutions limited investment as Black people moved in. There are no major grocery store chains and no pharmacies. Some houses remain set on dirt roads.

But interest among white Atlantans is on the rebound. From her stoop, Ms. Poe watches a familiar ritual as real estate investors walk the streets, pointing and buying. Debra Edelson, executive director of the Grove Park Foundation, describes the process as “white money pushing out Black people.”

That could once again include Ms. Poe. Rents have doubled, and property values are putting houses out of reach of her budget. A newly built, three-bedroom house is on the market for $409,000 – in a neighborhood where the average annual income is $23,000. “It goes so fast,” says Ms. Poe. “And it’s not as if you can lose something. You will lose something.”

The phenomenon of “gentry” moving into working-class areas is hardly new. Neither is the displacement caused by what could be termed the “brew pubification” of a neighborhood. Indeed, more than a decade after the housing crash of 2008 – and with millions of Americans now at risk of losing their homes due to the pandemic – the transformation of Grove Park is part of a national pattern long mired in race, class, and not-in-my-backyard policies.

Despite decades of efforts to break this pattern, fundamental questions remain unanswered: What makes a place a neighborhood? And what does that term really mean?

The need for answers is particularly dramatic in Atlanta, where many residents wear hoodies that say “Atlanta influences everything.” Yes, the city helped tip a national election and put a focus on racial reckoning. But struggles to provide affordable housing and social mobility for Black residents has the city itself at a demographic tipping point. Predictions indicate that in 30 years, the Black population of Atlanta could go from just over half to only one-third – with white residents making up a third and Asian and Hispanic Atlantans making up the rest.

“Cities need to think more strategically about the mix of population, because as the working-class population is displaced and scattered, you have changing social relations, longer commutes – social fragmentation that changes the identity of place,” says Euan Hague, a geographer at DePaul University in Chicago.

Facing rapid gentrification, Atlanta pushed the pause button, placing a building moratorium on Grove Park and several other neighborhoods. Such stoppages are blunt tools that may ultimately exacerbate housing problems, given that the root cause of skyrocketing prices and rents is a limited supply. Yet they can also give some breathing room to address evolving values that may hold the answer – and outline the challenges – to building diverse and vibrant neighborhoods, rooted in history.

A tug of war over a “community fridge”

“When white people move in, they need to differentiate themselves, sometimes by renaming entire neighborhoods,” says Kathryn Rice, an Atlanta housing activist. “We don’t like to think of racism in liberal, progressive Atlanta, but it’s still true. The city is still very, very segregated. And in gentrifying areas, you’re getting a clash between what values are there versus new ones, which leads to power struggles.”

Those struggles play out in small, but illuminating ways.

In the gentrifying neighborhood of Pittsburgh, about six miles from Grove Park, a group of residents placed a “community fridge” in a city park to help struggling neighbors during the pandemic. But four households – three white, one Black – complained. Though there had been no incidents involving the fridge, the neighbors worried about crime and the impact on their property values. A few days later, the city parks department hauled the fridge away.

For many, the struggle comes down to how to define a neighborhood. Is it a loose assemblage of groups and alliances working to improve property values, or a distinct place with a history that prizes people over profit?

“A neighborhood is a culture of reliance on different people: You know who you can borrow money from, who can watch your kids,” says Kamau Franklin, a Pittsburgh resident. “It’s a community and a culture. But people don’t think of it like that. They see poor folks who can be disposed of.”

As Atlanta demonstrates, that feeling of being disposable is not necessarily attached to race. In this majority-Black city, those displaced and those with the authority to help them tend to be the same race.

Despite nearly 50 years of Black leadership, the city has fallen far short of promises to replace thousands of razed public housing units with affordable housing. Lack of economic mobility for poorer Black residents is more pronounced in Atlanta than almost anywhere else in the U.S., with the median household income of white families almost three times that of Black families.

That state of affairs, at least in part, is the result of Black mayors looking forward more than looking back, says Ms. Edelson of the Grove Park Foundation.

Ron Daniels, founder and president of the Institute of the Black World 21st Century, has urged cities like Atlanta to view the impact of gentrification as an existential and immediate threat to Black culture.

“Many of these mayors were not equipped to deal with the phenomena of gentrification and may even be complicit,” says Mr. Daniels, who convened a 2019 National Emergency Summit on Gentrification. “If you do certain kinds of development without understanding the nature of market forces, then you are contributing to the displacement of Black people and culture without being aware of it. And some may be aware of it.”

Balancing progress and “a sense of place”

After the city invested tens of millions in a new park-and-trail system near Grove Park, Microsoft announced last month the purchase of a large parcel in the middle of the neighborhood for a new corporate campus.

To be sure, Microsoft President Brad Smith has vowed not only to hire from Atlanta’s Black educated class, but also to work to keep the neighborhood diverse. The problem, says Ms. Edelson, is that the speed of change will profoundly reorder the neighborhood long before Microsoft opens its doors.

But there are signs of progress. About a decade ago, a collaborative effort succeeded in revitalizing East Lake, a neighborhood on the other side of the city. The nonprofit Purpose Built Communities, which makes affordable housing a top priority for redevelopment, grew out of that effort and now supports revitalization not only in Atlanta but around the country.

Efforts that other cities are exploring might help Atlanta as well – such as policies that set aside a percentage of tax revenues from rising property values to be reinvested as low-income housing. Addressing not-in-my-backyard policies that restrict affordable multifamily housing could help too.

“It might be different if it was easier to build everywhere, where every neighborhood is changing at a gradual rate – so instead of a firehose on this one area, the whole city gets a gentle watering,” says Evan Mast, an urban economist at the W.E. Upjohn Institute for Employment Research, a nonpartisan organization in Kalamazoo, Michigan.

For now, Ms. Edelson calls Grove Park a “grand social experiment.” But “everyone has to be rowing in the same direction, otherwise we just get run over,” she says.

The problem for Ms. Poe and others isn’t gentrification per se. After all, Grove Park saw the opening of a new YMCA, an old community theater is being renovated, and more services and stores are all coming.

The point, she says, isn’t to keep the neighborhood Black, but to keep it culturally vibrant – and to safeguard a communal hearth.

But without a common narrative about what it means to be a neighborhood – and the sense of belonging that comes with it – improvements may be temporary, she fears.

“Yes, people will come, but without a sense of place, they will leave just as fast.”