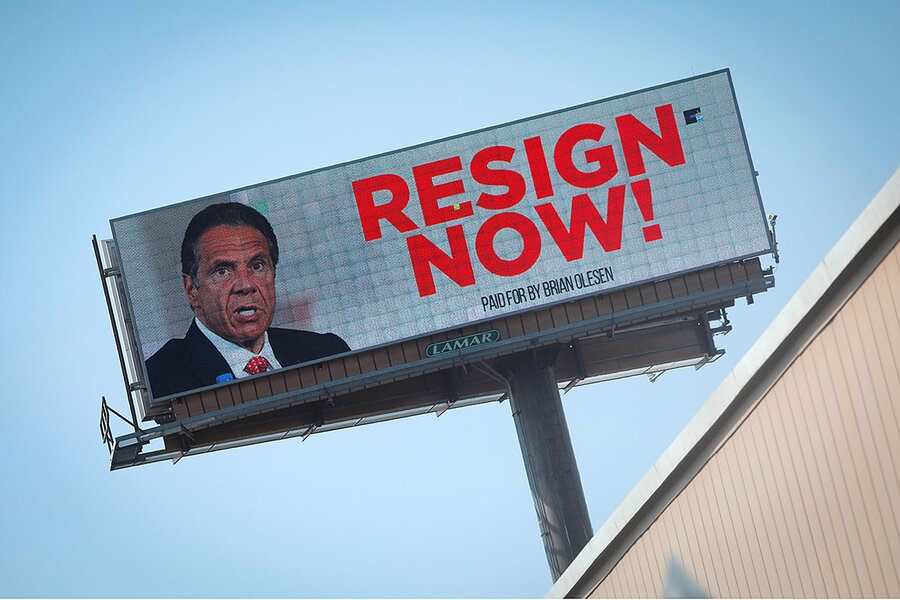 On Day One as president, Joe Biden laid down a marker for anyone working in his White House: Treat one another with respect, or “I will fire you on the spot.”

“We have to restore the soul of this country,” he added, a not-so-subtle dig at his predecessor.

Indeed, less than a month later, a senior member of the Biden press team was asked to resign over his use of sexually crude, threatening language toward a female reporter. But in a larger sense, the president’s plea for civility and decency also seemed aimed at the nation – including the Democratic Party he leads.

Now, the politics of personal conduct has burst forth yet again. New York Gov. Andrew Cuomo, a prominent Democrat, is facing calls for resignation over alleged sexual harassment of women, two of whom worked for him at the time. The scandal has been compounded by another embroiling Governor Cuomo – allegations that his administration purposely withheld data on COVID-19 deaths in New York nursing homes.

Yet some three years after the #MeToo movement swept the nation, bringing new scrutiny and standards to workplace behavior and power imbalances, the reports of Mr. Cuomo’s sexually charged language with young women are raising knotty political and ethical questions for Democrats. Some see a moral imperative to draw a bright line on such matters, remembering the damage of the Clinton era. Others are wondering if the party has been, at times, too quick to react – such as in the case of former Minnesota Sen. Al Franken. Indeed, after watching Republicans largely disregard sexual assault allegations against President Donald Trump for four years, some are asking: Why should Democrats be so much harder on their own?

“We have no other choice if we’re going to stay true to our principles,” says Democratic strategist Jim Manley. “I’d rather see us leave the hypocrisy to the Republicans. I have no problem with Joe Biden setting a high standard.”

GOP pollster Whit Ayres doesn’t see the Biden message on respect as necessarily having a partisan bent. “It’s clear that President Biden ran the campaign with an underlying theme that character is as important as policy,” Mr. Ayres says. “That is not a Republican or a Democratic message. It’s a message that has particular resonance throughout the ages.”

Republicans disagree that they look the other way at bad behavior in their ranks. Plenty of party members paused over Donald Trump’s numerous alleged sexual misdeeds that came to light during his first campaign. But once he was elected president, the party effectively decided to live with his past. And while President Trump wasn’t accused of sexual misconduct while in office, as Mr. Cuomo has been, the former president’s mercurial style led to many high-level departures during his time in the White House; some former officials don’t hide their disdain for the ex-president, though he remains popular with the party’s base.

Bad optics for the GOP have continued, with two freshman congressmen facing harsh allegations this week about past behavior. In a Pentagon report, Rep. Ronny Jackson of Texas was accused of sexual harassment and drinking alcohol on the job while serving as White House physician. Rep. Madison Cawthorn of North Carolina also faces renewed allegations of past sexual misconduct. Both men have denied the charges, and it remains to be seen how their party caucus will handle the reports.

Of course, Democrats have their own history of looking the other way at prominent members who engage in sexual misconduct, including former President Bill Clinton. Some feminists played down reports of Mr. Clinton’s misbehavior when he was running for president – and stuck by him even after his impeachment for lying under oath about sexual misdeeds, arguing that his policies were good for women.

Today, Mr. Biden’s own stance on bad past behavior – if not sexual impropriety, at least the incivility he decried on Inauguration Day – hasn’t come without inconsistencies. He nominated Neera Tanden, a veteran of the Clinton and Obama administrations, to be his budget director, despite a history of “mean tweets” against prominent senators of both parties.

Her prospects collapsed last week after Democratic Sen. Joe Manchin of West Virginia announced he could not support her after concluding that her past statements would have a “toxic and detrimental impact” on her ability to work collaboratively with members of Congress. Still, when Ms. Tanden withdrew from consideration Tuesday, Mr. Biden said he looked forward to having her serve his administration in a position that doesn’t require confirmation.

Some political observers suggest that it is Ms. Tanden’s fighting spirit that led Mr. Biden to want her on his team in the first place. And adhering to standards of civility, they add, doesn’t mean his people will be patsies when confronting opposition to the Biden agenda.

But Ms. Tanden’s tweets were one thing. More problematic, legal experts say, is the episode of her pushing a journalist, which she acknowledges. Mr. Cuomo’s alleged pattern of conduct with now-former aides also suggests potential violations of law.

“There is a line,” says Margaret Johnson, co-director of the Center on Applied Feminism at the University of Baltimore. “The law says you can’t, in an employment setting or other settings, treat someone with unwelcome sexual advances or comments that are severe or pervasive, that affect the terms and conditions of their employment.”

New York Attorney General Letitia James has now launched an independent investigation into the charges against Mr. Cuomo. Numerous Democratic officials have called on him to resign, both over the alleged sexual harassment and the nursing home imbroglio, but at his press conference Wednesday, Mr. Cuomo seemed to buy time. He apologized for his behavior toward his three female accusers, and insisted he meant no harm, though he still seemed to put the onus on the women’s perceptions of his behavior and not on the behavior itself.

Commentators suggest that the #MeToo movement has moved into a new phase, in part because Mr. Trump – seen by some as the catalyst – is no longer in office.

“With Donald Trump out of the limelight, by definition, the entire movement stepped back a bit,” says Jennifer Lawless, a political scientist at the University of Virginia.

“We’ve seen so many egregious examples of sexual harassment and sexual assault and just hostile working conditions for women that – and this is a terrible way to put it – the novelty has worn off,” Professor Lawless says. “In some ways, people have become almost inoculated against these kinds of charges.”

And, she adds, given the global pandemic and profound economic challenges some face, other issues fade in prominence.

Ms. Lawless points to the resignation of Senator Franken in January 2018, early in the #MeToo movement, as an example of how accused public figures were given much less opportunity to defend themselves than they are now. The sexual assault convictions of former Hollywood producer Harvey Weinstein were one thing. The murkier charges leveled against Mr. Franken, beginning with the resurfacing of an old photo from his comedy days of him pretending to grope a female comedian, were something else.

Democratic Sen. Kirsten Gillibrand of New York, an advocate for women’s rights who led the charge against Mr. Franken, has been more cautious over her home state governor’s fate, and not called on him to resign.

“The importance of a full investigation has become really key,” says Ms. Lawless, noting that some investigations of accused men haven’t panned out. “Like with any movement, the pendulum swings back and forth until it hits the right point.”

The main thing, she says, is that women still need to feel they can come forward with accusations, and bring bad conduct to the forefront without being maligned in the process.

Letty Cottin Pogrebin, a founding editor of Ms. magazine, hails from the era of “second-wave feminism,” when women gained reproductive rights and other laws aimed at equality, but still struggled with the power dynamic in the workplace and in social settings.

Now, she looks at her 20-something granddaughters’ generation and sees that “it’s still hard to adjudicate a male superior who has power over you.”

“You’re trying to be taken seriously, but you still get reduced to how you look,” Ms. Pogrebin says.

As for Mr. Biden’s Day One edict, she says, “it’s a proclamation that norms are returning. Be prepared.”