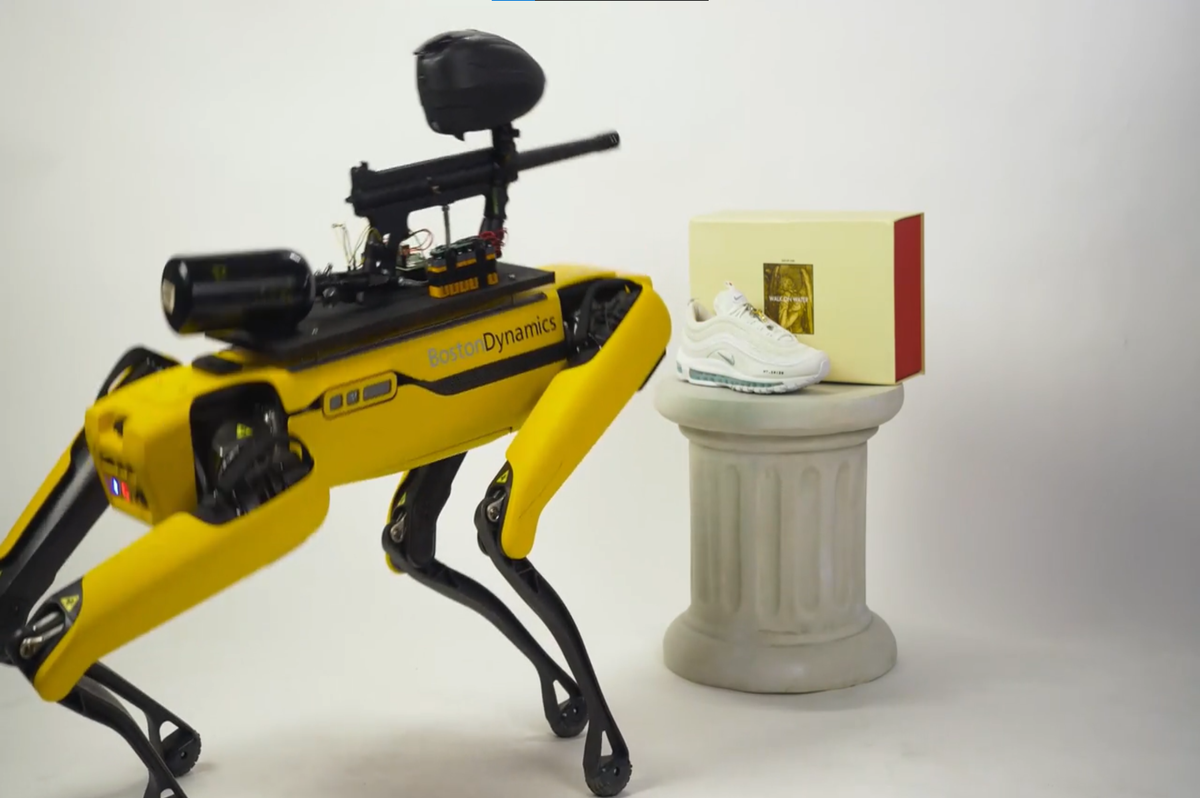 Boston Dynamics’ robot dog Spot has had a paintball gun affixed to it and will be let loose inside a mock art gallery that can be controlled by viewers over the internet.

The bizarre exhibit is ran by MSCHF, the internet collective that has also been responsible for providing stock advice based on people’s horoscopes, trainers that contain holy water, and £55,000 sandals made from a destroyed Hermès Birkin bag called “Birkinstocks”.

On 24 Feb at 6:00pm, the website Spot’s Rampage will swap control between users on the website every two minutes. Spot’s .68 caliber paintball fun will then be free to destroy anything in the gallery – or not, depending on the intentions of who is controlling it.

The website’s manifesto states that Spot is an “empathy missile, shaped like man’s best friend and targeted straight at our fight or flight instinct. When killer robots come to America they will be wrapped in fur, carrying a ball.”

The website goes on to say that Spot will “definitely be used by police and the military to murder people. And what do police departments have? Strong unions! Spot is employee of the month. You never need to union bust a robot – but a robot can union bust you.”

Police in the US were quietly testing using Spot alongside officers in 2019, as shown by a video published by Massachusetts State Police which subsequently prompted action from the American Civil Liberties Union.

Concerns over technology being used to quell labour movements has already been levied at technology companies, while automated drone strikes have been a troubling reality since, and under, the Obama presidency.

Boston Dynamics was originally interested in working with MSCHF. “They came to us with the idea that they were going to do a creative project with Spot,” a representative for the company told TechCrunch.

“They’re a creative group of guys, who have done a bunch of creative things. In our conversations, we said that if you want to cooperate with us, we want to make it clear that the robots will not be used in any way that hurts people.”

However, since then the company has issued a statement on Twitter condemning the art piece:

“Today we learned that an art group is planning a spectacle to draw attention to a provocative use of our industrial robot, Spot. To be clear, we condemn the portrayal of our technology in any way that promotes violence, harm, or intimidation. Our mission is to create and deliver surprisingly capable robots that inspire, delight & positively impact society.

“We take great care to make sure our customers intend to use our robots for legal uses. We cross-check every purchase request against the U.S. Government’s denied persons and entities lists, prior to authorizing a sale.

“In addition, all buyers must agree to our Terms and Conditions of Sale, which state that our products must be used in compliance with the law, and cannot be used to harm or intimidate people or animals. Any violation of our Terms of Sale will automatically void the product’s warranty and prevent the robot from being updated, serviced, repaired or replaced.

“Provocative art can help push useful dialogue about the role of technology in our daily lives. This art, however, fundamentally misrepresents Spot and how it is being used to benefit our daily lives.”

On the Spot’s Rampage website, MSCHF said that they had “talked with Boston Dynamics and they HATED this idea. They said they would give us another TWO Spots for FREE if we took the gun off.”

This, however, simply “made [MSCHF] want to do this even more”, and in the event that Spot stops working the organisation will know that Boston Dynamics has “a backdoor override built into each and every one of these little robots.”

Wired points out that because Spot periodically checks with Boston Dynamics’ servers, it would be possible for the company to disable Spot remotely. “We’re wrestling with that,” Michael Perry, the company’s vice president of business development, told the publication.

Boston Dynamics apparently suggested to MSCHF that they could use a paintbrush in the art space, rather than a gun, using Spot’s robot arm. MSCHF implied that such a change would be missing the point; that the “distinct chill” one would feel from “the thrill of pulling the trigger” is to show users that “these little cuties will kill people sooner or later”.

Botson Dynamics retorted that using its technology to scare people is not within its terms of use nor how the company imagined the product being beneficial for people.