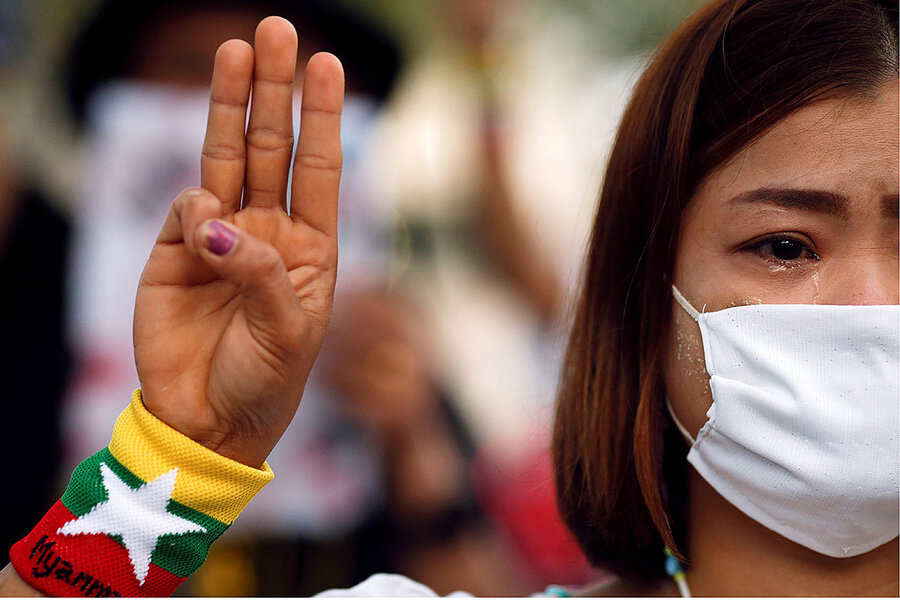 “The last 10 years have seen Myanmar open up to the outside world, and that’s created a boom both in incoming investment and trade,” says Gregory Poling, senior fellow for Southeast Asia at the Center for Strategic and International Studies.

“It’s also created a boom in information technology. Everybody now has internet-connected 4G phones; everybody’s on Facebook,” he says. “It’s certainly a different world in Myanmar than it was a decade ago, and the generals are finding that out the hard way as they try to clamp down on these protests, and find that they are much more adaptive and resilient.”

A young generation that came of age enjoying new freedoms and connectivity is now joining the ranks of protesters in Thailand, Hong Kong, and Taiwan, using social media to trade ideas and build solidarity.

The 10-nation Association of Southeast Asian Nations (ASEAN), which promotes regional integration and diplomacy, has a major stake in ending the crisis in Myanmar, a member state. Yet hampered by internal divisions and institutional paralysis, the regional bloc could only muster a muted statement this week that called for “all parties” in Myanmar to halt violence and begin dialogue.

“This is a huge headache for ASEAN,” says a Southeast Asia expert who spoke on condition of anonymity due to security concerns. “It’s very difficult for ASEAN to be in the driver’s seat [of the regional agenda] when one member is dragging it down.”

Despite growing connectivity, ASEAN “is between a rock and a hard place” on Myanmar, says Mr. Poling. “They worry that if it returns to full-on pariah status, it will become a weight around the neck of the organization,” he says.

The fear is that sanctions would “back the generals into a corner and make them even more violent and less susceptible to international cajoling,” he says. Instead, ASEAN now seeks to establish itself as a conduit for outside parties to talk to the generals and urge them toward compromise, he says.

Nevertheless, some investors may be reconsidering their ties to Myanmar. In Singapore, “investors … are beginning to re-evaluate their investments in Myanmar’s economy,” Singapore’s minister for foreign affairs, Vivian Balakrishnan, said in a statement.

Japan, another country with growing economic ties to Myanmar, is also a major aid donor. “Japan might be one of the few actors that has the economic incentives, the leverage on all sides, and the willingness to try to do something about the situation,” says a researcher in Thailand with extensive experience in Myanmar who requested anonymity for security reasons.

For example, Tokyo’s special envoy to Myanmar, Yohei Sasakawa, chairman of the Nippon Foundation, recently helped negotiate a cease-fire between the military and insurgents in the western state of Rakhine, even as political tensions built up after pro-democracy parties swept the November election.

This level of trust with Myanmar’s generals, including with coup leader Gen. Min Aung Hlaing, offers a potential opening for Mr. Sasakawa and other Japanese envoys to urge the military to restore civilian rule, the researcher says.

Analysts say Japan prefers mediation over punitive economic measures that could isolate Myanmar and push it toward China.

A Chinese sphere of influence?

For its part, Beijing’s sway in Myanmar is perhaps greater than that of any other country. But the historic mistrust of China among Myanmar’s military leaders and the public – as well as China’s doctrine of non-interference – make it unlikely that China will play a proactive role that goes beyond securing its strategic economic interests in Myanmar.

Beijing “is in a somewhat awkward position” as the result of the coup, said Derek Mitchell, president of the National Democratic Institute and former U.S. ambassador to Myanmar, in a recent podcast.

Above all, China seeks to maintain what it considers a privileged position and sphere of influence in Myanmar, while blunting the involvement of the United States and other Western countries, Ambassador Mitchell says.

Experts stress that a key source of leverage over Myanmar’s coup leaders are the financial interests of top generals who have profited from the country’s opening. “The leverage anyone has is around parochial issues of money and physical security,” says the Southeast Asia expert. “No one should lose sight of that.”

Toward that end, the United States, Britain, Canada, and the European Union have imposed new sanctions on Myanmar’s military leaders. U.S. officials last month blocked a move by Myanmar’s military rulers to move about $1 billion held at the Federal Reserve Bank of New York and put a freeze on the funds, Reuters reported Thursday.

Ultimately, however, the biggest obstacle to military rule is popular support for democratic rule that has flourished over a decade of opening.

Protesters in Myanmar have learned from similar pro-democracy movements in Thailand and Hong Kong, and have built ties with fellow activists – the “Milk Tea Alliance” – to help sustain their effort.

Targeted sanctions against Myanmar’s military chiefs “can impose a little cost, but most of these guys have spent their entire lives as international pariahs. These are not cosmopolitan leaders,” says Mr. Poling.

“Any influence that the international community – whether it is the U.S. or Japan or Singapore – has is really going to be on the margins. If the protests in the streets get 99% of the way there, the U.S. and Europeans and Japanese can help push it the last 1%.”