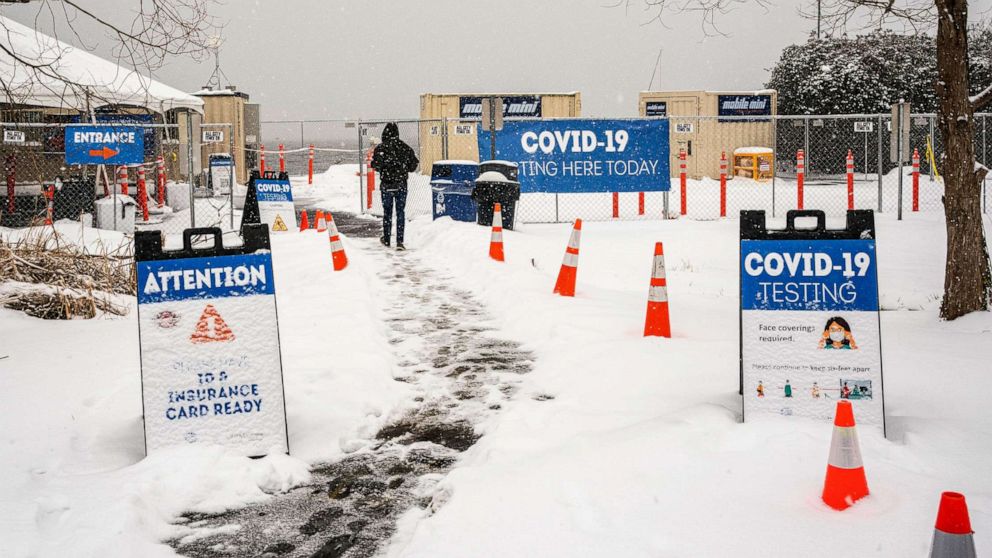 As the effort to vaccinate Americans intensifies, daily COVID-19 test numbers are falling nationwide, an alarming sign to public health experts who say the tests are still crucial to containing the virus.

Testing has been a fraught and highly politicized issue from the beginning of the pandemic, with the first tests rolling out slowly, testing taking a while to ramp up and former President Trump wrongly claiming that an increase in testing was behind the world-leading level of coronavirus cases in the U.S. There have also been issues with testing access and the reliability of certain types of tests.

The daily average for COVID tests is now just over 1 million a day as of mid-February— roughly a million less from where the country was a month ago, according to the COVID Tracking Project at Johns Hopkins University. The decline has been one of the steepest of the pandemic. Testing numbers in recent days, however, have slowly begun climbing upward, but aren’t near the level they were at their height during the 2020 holiday travel season.

So far this year, U.S. testing hit its peak on Jan. 15 with 2.2 million tests as the virus raged at unprecedented levels. But from then on, daily testing declined despite the emergence of new variants and cases recently appearing to plateau at high levels, as top health officials have pointed out.

“It’s incredibly counterintuitive for testing to be dropping in general, especially when we know that we’re not past the point of feeling like the worst is behind us,” said Jessica Malaty, the science communications lead at the COVID Tracking Project. “It’s also frustrating that tests are being unused.”

Some medical experts believe that the intense focus on vaccinations as opposed to testing amid the continued spread of new variants may also be playing role in driving test numbers down.

“The same people who are doing the testing are often the same ones doing the vaccinations,” said Dr. Wafaa El-Sadr, a professor of epidemiology and medicine at Columbia University Mailman School of Public Health. “And the attention to some of the issues around supply may affect the focus turning to vaccines rather than tests.”

The overall decline in testing tracks with reductions in other important coronavirus metrics, including new infections, hospitalizations and deaths. But data watchdogs insist that it would be wrong to conclude that the drop in new cases is connected to the decline in tests, given the increased risk of infection from the continued spread of new coronavirus variants.

“I also want to make sure that we’re not falling into the fallacy of if we test less, we see less cases,” said Malaty. “That’s not one of the reasons that we can use in explaining our case reduction. It’s a dangerous correlation to make.”

According to the Rockefeller Foundation, the United States needs 193 million tests monthly for schools and nursing homes “to open safely and in stages” – a threshold the nation has never reached. The Centers for Disease Control has determined that more than 333 million COVID-19 tests have been conducted for the entirety of the pandemic in the U.S.

The Biden administration has laid out a $50 billion plan that would boost the nation’s testing capacity through the increase of rapid antigen tests, testing centers, expand lab test processing, provide uniform guidance for in-school COVID testing and establish a national pandemic testing board.

The administration also announced a $230 million deal with Ellume, an Australian digital diagnostics company, to provide 8.5 million over-the-counter at-home tests. Ellume plans to produce 100,000 testing kits per month through July and ramp up to 19 million a month by the end of the year.

But those plans to increase test supply risk falling flat, especially if U.S. coronavirus testing numbers continue to fall amid a growing inventory of unused tests.

Millions of rapid coronavirus tests have sat unused after the Trump administration pushed them out quickly to states, but didn’t track whether and how they were used. According to an analysis by the Wall Street Journal, out of 142 million Abbott BinaxNOW tests shipped to states, at least 32 million were left untouched as of early February.

A Biden administration official, who spoke on condition of anonymity, told ABC News the federal government still doesn’t have a complete picture yet of precisely how many tests are sitting on shelves.

The official said the goal now is to figure out if there are tests some states don’t want and either provide them guidance on how to use them or ship them elsewhere. The administration wants to track other rapid tests given to the states too, and possibly rely on coordinating testing hubs to make them easier to use.

“We are fully cognizant and aware that this is a massive logistical challenge,” the official said, who spoke on condition of anonymity in order to discuss internal deliberations.

The BinaxNOW tests, available for $5, often require support making it more challenging than just pushing out to the general public.

Abbott’s BinaxNOW tests, while currently being used as an at-home test and at retail pharmacies, universities, in addition to long-term care facilities, requires the assistance of a trained tele-health professional to guide users through the process. Additionally, Wi-Fi access and digital equipment with a video calling feature are required—resources that are not readily available to every American.

Public health experts point to such issues, and others including affordability and access, as reasons why daily U.S. coronavirus test numbers still aren’t at the level they should be at. A growing number of employers continue to offer their employees free, regular testing, but outside of that many, must take care of the expenses on their own.

Nationwide, health insurance companies have differing policies as to how much of a COVID-19 test’s costs that they can cover for their subscribers. It’s a concern that has made low-cost, over-the-counter access for COVID tests of special importance.

“We need to have these tests be single digits in the $5-dollar range for them to be affordable for many, if not most Americans,” said Mara Aspinall, an advisor to the Rockefeller Foundation and professor of practice in the biomedical diagnostics program at Arizona State University. “You can get a pregnancy test at Dollar Tree for a dollar. We’re not going to get there, but we need to be close.”