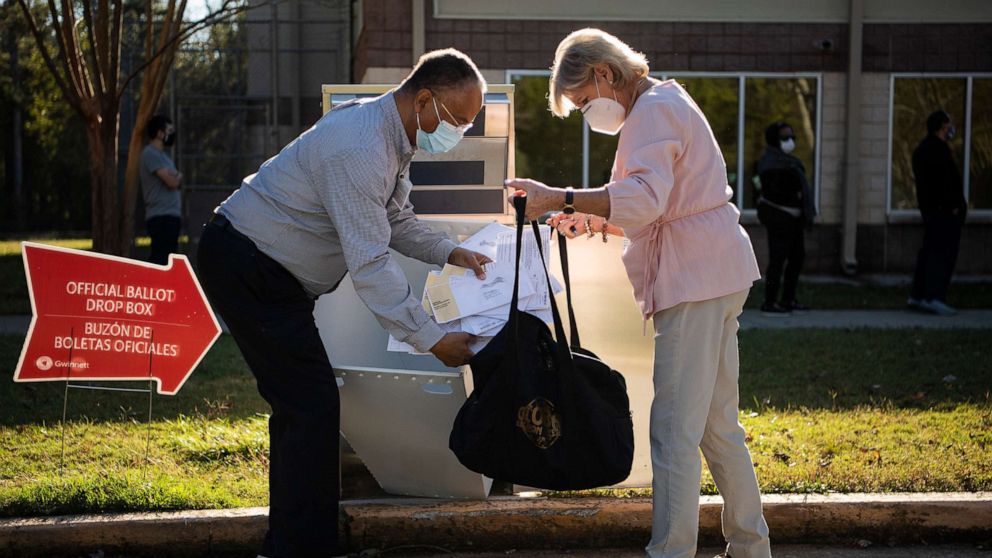 Tuesday is a huge day for voting rights in Washington. The Supreme Court will hear arguments in an Arizona case that tests the scope of the Voting Rights Act, and the House is expected to begin debate on a Biden-backed bill to expand voter registration and ballot access.

Developing action could be even more consequential at the state level, with more than 250 bills filed across 43 state legislatures this year would make it harder to vote, according to the Brennan Center for Justice. One such bill restricting ballot drop boxes, limiting early voting and requiring additional identification for absentee voting passed the Georgia House on Monday.

Similar proposals have been offered for years or decades. But many Republicans have found a new talking point: Lack of public trust in the outcome of November’s election — trust eroded in part by the “big lie” about that very election, propagated by former President Donald Trump and other prominent Republicans.

“What is new is the legislators’ justification for putting it forward — that voters lost confidence in the system,” Arizona Secretary of State Katie Hobbs, a Democrat, told ABC News Monday. “We’re not the ones who broke it — they are. And now they’re using it as an excuse to ‘fix’ it.”

Most if not all congressional Republicans are expected oppose the sweeping House bill — labeled “HR 1” to signal its importance to Democrats — this week.

Senate Republican Leader Mitch McConnell has called it the “Democrat Politician Protection Act,” and it includes a host of other provisions — including a commitment to statement for the District of Columbia and a requirement that future presidential candidates release their tax returns.

More broadly, Trump’s false claims about the election have been dismissed and disproven. Yet they linger on — not just as a Conservative Political Action Conference applause line, but to underpin high-stakes challenges to the way Americans vote.

During his second virtual meeting with a foreign leader as president, on Monday, Biden reinforced his intent to bolster U.S.-Mexico relations by implying a shift from the rhetoric often used by his predecessor.

“In the Obama-Biden administration, we made a commitment that we look at Mexico as an equal, not as somebody who is south of our border. You are our equal, and what you do in Mexico and how you succeed impacts dramatically on what the rest of the hemisphere will look like,” Biden said.

Still, the Biden administration faces criticism from human rights and immigration advocacy organizations for continuing to utilize a Trump-era pandemic policy that allows border officials to turn away most migrants. Mayorkas insisted the Biden administration’s approach is different from that of the Trump White House in saying “we are not expelling young children.” The DHS chief laid out another tangible shift under the new president in the scope of future family reunifications.

“We are hoping to reunite the families either here or in the country of origin. We hope to be in a position to give them the election and if, in fact, they seek to reunite here in the United States, we will explore lawful pathways for them to remain in the United States and to address the family needs, so we are acting as restoratively as possible,” Mayorkas said.

A day after Trump’s not-so-subtle call to expel the GOP of his detractors, his influence is undercutting the party’s efforts to unite in a bitter, intraparty clash between two Trump-aligned Republicans running for Ohio’s open Senate seat.

On Monday, former state party chair Jane Timken implored her congressman, Ohio Rep. Anthony Gonzalez, to resign over voting to impeach Trump — a move that breaks with her own rhetoric last month when she called him “a very effective legislator” and said she thinks “he’s got a rational reason why he voted that way.”

Former Ohio Treasurer Josh Mandel, Timken’s Republican rival, seized on her “flip-flop,” saying in a statement, “Last night, President Trump declared that there is no room in the party for ‘spineless establishment Republicans’ and with this latest flip-flop, Jane Timken has proven herself just that — a spineless establishment flip-flopper.” The infighting comes after Trump intervened in Gonzalez’s bid for re-election, endorsing his primary challenger, Max Miller, a longtime loyalist and former White House aide. Mandel, too, backed Miller, further positioning himself in line with Trump.

It’s just one example of the all-out war to prove who can still be Trumpiest, and after Trump reclaimed his grip on the party over the weekend, it likely won’t be the last.

ABC News’ “Soul of a Nation” series. ABC News launches a six-episode, primetime series presenting viewers with a unique window into authentic realities of Black life and dive deeper into this critical moment of racial reckoning. Each episode will explore a specific theme including spirituality, Black joy, activism in sports and the racial reckoning that erupted after George Floyd’s death. “Soul of a Nation” comes to Tuesday nights in March on ABC. Episodes can also be viewed the next day on demand and on Hulu. https://abcn.ws/3pCbk5c

FiveThirtyEight’s Politics Podcast. The Senate parliamentarian ruled on Thursday that Democrats could not raise the federal minimum wage using the reconciliation process, effectively meaning Democrats will need 60 Senate votes to enact that policy. That represents the first of many expected procedural roadblocks to the Democratic agenda over the next two years. In this installment of the FiveThirtyEight Politics podcast, the crew discusses Democratic lawmakers’ varying views on how to approach Senate rules and the filibuster in particular. They also look to the speeches from the past weekend’s Conservative Political Action Conference for indications about where the Republican Party is headed. https://53eig.ht/3qf59EJ