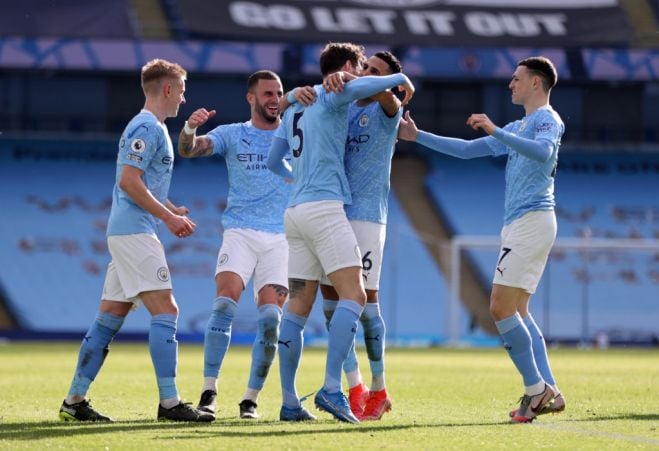 Manchester City are 14 points clear at the top of the table (Clive Brunskill/PA), © PA Wire/PA Images

The Manchester derby is set to hog the headlines this weekend, when Pep Guardiola’s City would take another stride towards the Premier League title if they beat United at the Etihad Stadium.

Elsewhere, a Newcastle side plagued by reports of off-field disharmony travel to West Brom as both teams look to boost their chances of beating the drop, while Liverpool will be looking to put an end to a miserable home run.

Here, the PA news agency looks at some of the major talking points ahead of the action over the next couple of days.

What a difference a few weeks can make

On January 12, Manchester United sat atop the Premier League table after 17 fixtures following a 1-0 win at Burnley, while their city rivals were seven points below them, albeit with two games in hand. Less than two months later and most think City are champions-in-waiting, 14 points clear of second-placed United thanks to an unbeaten run stretching back to November 21. There are murmurings of discontent at United after three successive goalless draws in all competitions, so what better way to end the goal drought than against the league leaders on Sunday? A win will likely make little difference in the title race, but it would strengthen United’s hopes of a top-four finish.

Newcastle in a tailspin?

With Newcastle’s three brightest attacking talents Callum Wilson, Miguel Almiron and Allan Saint-Maximin sidelined until next month at least, Steve Bruce already had a headache ahead of Sunday’s trip to the Hawthorns. He probably could have done without a training ground dispute with Matt Ritchie earlier this week being leaked into the public domain, but the fallout – since resolved – adds to the impression all is not well at St James’ Park. It comes at the worst possible time, with the north-east club only three points above the drop zone and Fulham and West Brom making strides in recent weeks. Sam Allardyce would love to draw his former club even deeper into the relegation mix.

.@LFC manager Jurgen Klopp on the @MoSalah 'situation' and whether he feels the responsibility of being the main goalscorer with others underperforming pic.twitter.com/Kho1PD6ev3

A 1-0 defeat against Chelsea on Thursday was Liverpool’s fifth in a row at Anfield – the Reds’ worst home league run in their history. Injuries and a dramatic loss of form have conspired to derail their title defence and, where they are sitting right now, securing a top-four finish would be an achievement. To do so, Liverpool must rediscover their home comforts – from April 24, 2017 to January 20, 2021, they did not lose a single league game at the Merseyside fortress but the defeat to Burnley has certainly opened the floodgates. A win over relegation-threatened Fulham on Sunday would go some way to easing any nerves at Liverpool.

A sensational volley from Kelechi Iheanacho and a couple of excellent saves by Kasper Schmeichel ensured a 1-1 draw at Burnley for Leicester, who avoided a third successive defeat in all competitions last time out. That would have been a first under Brendan Rodgers’ management, so it was no doubt a relief to avoid an unwanted record at a time when injuries to key players have stretched their resources. Harvey Barnes, James Maddison, Ayoze Perez, Dennis Praet, Jonny Evans, James Justin and Wes Morgan are all unavailable for Saturday night’s trip to Brighton, but Rodgers himself knows they cannot use their injury situation as an excuse as they look for a top-four finish.

📺 Watch LIVE as Ralph Hasenhüttl speaks to the media ahead of Saturday's trip to #SUFC: https://t.co/sW71oZgxv7

A trip to Bramall Lane to take on a Sheffield United side who have won just four times in 27 games this season might be a welcome tonic for Southampton, who all of a sudden are casting nervous glances over their shoulders. While they are currently seven points above the bottom three, they have taken just one point from their last nine games. There is the sense that last month’s 9-0 defeat at Manchester United might still be weighing on their minds but they need to move on to avoid being sucked into a scrap for survival. The Blades’ four wins have come in their last 10 fixtures but they are 12 points adrift of safety and many believe they are already doomed.