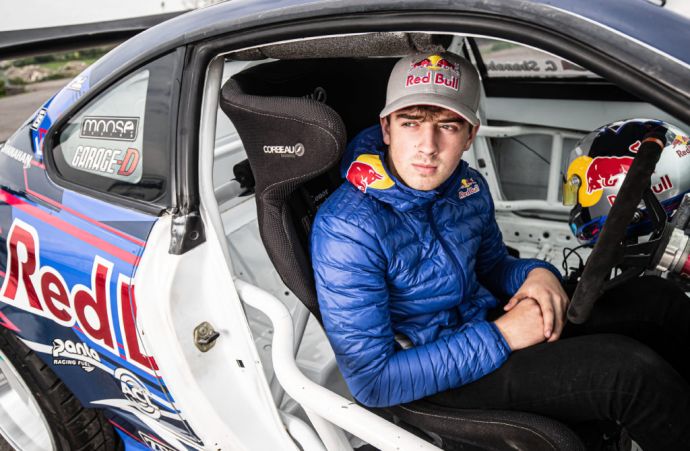 Cork's Conor Shanahan, at just 18-years old, is about to step onto the world drifting stage, with the backing of energy drinks giant Red Bull

Before we start — what’s drifting? Basically, it’s a form of motorsport based on almost, but not quite, having an accident. Starting in Japan in the 1980s, drifting — the art of getting a car to balletically slide and skid – without tipping into a full-blown spin — has become a major success story, with big money prizes and global competitions to see who’s the best.

This year, a kid from Cork might just be the best. Conor Shanahan, at just 18-years old, is about to step onto the world drifting stage, with the backing of energy drinks giant Red Bull. He’ll be competing in the Drift Masters European Championship (DMEC), which kicks off on May 29th in Greinbach in Austria, and which will smoke its tyres across Europe until the final, on the streets of Tbilisi in Georgia, in September.

Ahead of the season starting, Shanahan said: “I’m really excited for the new season; it’s been a super long 12 months and it’s good to finally get behind the wheel again. This year will be my first full series with the support of Red Bull and I’m planning on sending it all season long.”

According to the organisers of the DMEC, this year will see the most diverse group of drivers — in terms of nationality — yet, and the series will visit circuits of equal diversity, such as the Lillesand Arena circuit in Norway with its huge elevation changes, or the Bikernieku Trase Circuitk in Riga, Latvia, on which the competitors line up to get their cars sliding at more than 150km/h.

Shanahan isn’t fazed by such challenges, though. “Tbilisi is going to be insane! It’s something very different and exciting; I can’t wait to find out what the race layout is going to be. Racing in the middle of a city is definitely going to put us out of our comfort zone and it’ll be great to take our unique sport to the people. Riga is one of my favourite tracks, it’s the fastest and the smallest mistake can bring you unstuck” he said.

Of course, Shanahan has already laid down a major marker for his future career. Five years ago, aged a mere 13, he was invited to take part in a drifting competition against TV’s Richard Hammond, in an episode of Amazon’s car-based show, The Grand Tour.

Even against the — ahem — skills of a former Top Gear star, Shanahan stood out. “Yeah, working with Richard and the Grand Tour guys definitely taught me a lot. It was a big step for me at the time, because even though I’d been drifting since I was nine, I’d never done a big media thing like that before. We were there from Wednesday through to Friday filming, and because of my age there were restrictions on how long I could film for, so it was pretty intense. Great fun, though, yeah” Shanahan told The Irish Times last year.

Drift Masters Grand Prix President Arkadiusz Dudko is keen to get the racing fans up close and personal with the competitors and their cars: “Once again we will race in Riga, which holds a special place in the heart of the drifting community.

Latvian fans are some of the most passionate in the sport. With this race, we want to bring fans closer to the action. Look at the Monaco Formula One Grand Prix. Fans aren’t watching from the grandstands, they’re on the street and their balconies. One day it’s a café terrace, the next it’s race seats just metres away from a hairpin turn. That’s what makes this race exciting.”