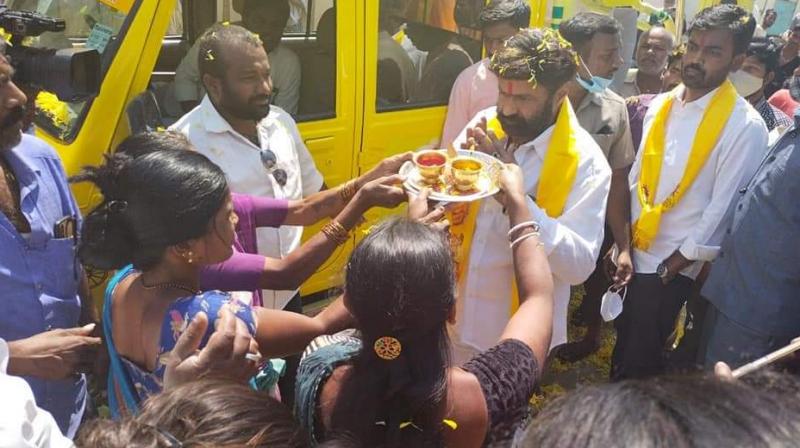 ANANTAPUR: In view of the defeat of the Telugu Desam in a majority of gram panchayats in Hindupur area, MLA and film star Balakrishna is making serious efforts to regain the TD’s hold over Hindupur municipality.

Balakrishna is conducting road shows and campaigns in the municipality in recent days with a view to neutralizing the influence of the YSRC over the voters as was reflected in the gram panchayat polls.

The TD had won the chairperson seat in the last polls while the Congress proved its existence in the previous polls. For Telugu Desam, BS Vidayasagar had become the municipal chairman during the NTR term. The municipal poll process later went through legal complications following the merger of Kotnur and Kollakunta gram panchayats with the municipality.

In recent gram panchayat polls, Hindupur, which was under the grip of the TD for over three and a half decades, deserted the party. The YSRC bagged more than 80 per cent of the gram panchayats under the Hindupur assembly segment.

Hindupur has been a stronghold for Telugu Desam since 1985. Party founder NT Rama Rao won thrice from this assembly segment — and functioned twice as CM and once as leader of Opposition during this period. People continued to support TD till the last general polls. This period saw NTR’s sons Nandamuri Hari Krishna and Nandamuri Balakrishna and other TD candidates winning the assembly polls from Hindupur.

Congress and other parties were unable to establish a hold in Hindupur till the last general polls.

The scenario changed dramatically during the recent gram panchayat polls. Even MLA Nandamuri Balakrishna stayed there for campaign for a couple of days and yet the YSRC won a majority of GPs.

Alerted over the gram panchayat drubbing, Balakrishna began fresh efforts to attract voters to the TD through roadshows and campaigns in the municipal wards of Hindupur in the past two days.

Former MLA Pamisetty Ranganayakulu, a strong leader from the weaver community from Muddireddypalli area, joined the TD but internal bickering among the other leaders followed. “Previously, Balakrishna was depending on leaders and PAs during the polls, but the present municipal polls have turned out to be a matter of prestige for the film star if only to prove the existence of his father’s glorious era,” political analyst Prasad said.

Balakrihsna, during his road shows, made scathing attacks on the YSRC government and urged the voters to teach a lesson to chief minister Jagan Mohan Reddy through the municipal polls.