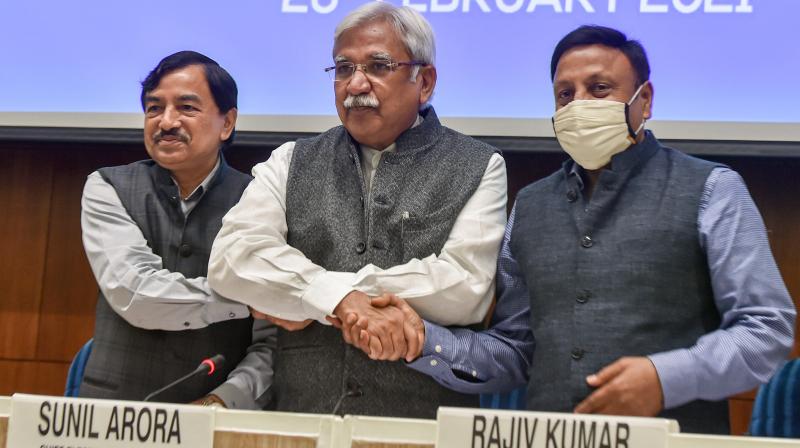 New Delhi: The stage is set for Assembly elections in two states in eastern India, and two states and a Union territory in the South, as the Election Commission announced the voting days in Kerala, Tamil Nadu, West Bengal, Assam and Puducherry UT. The Assembly polls for 294 seats in West Bengal will be conducted over a record eight phases, from March 27 till April 29, and that of Assam’s 126 seats in three phases — from March 27 to April 6. The southern states and the UT will hold polls in a single phase on April 6. The counting of votes for all five states/UT will be held on May 2.

Nearly 18.68 crore voters are expected to cast their votes at 2.7 lakh polling stations for 824 Assembly seats across Assam, West Bengal, Kerala, Tamil Nadu and Puducherry, Chief Election Commissioner Sunil Arora said. He added that all officials and other personnel on poll duty will be vaccinated against Covid-19 before the polling begins.

The Election Commission has decided to appoint two special observers for West Bengal and a third may also be sent if required, Mr Arora said, even as West Bengal chief minister Mamata Banerjee questioned the rationale behind the eight-phase Assembly polls announced by the EC – one more than the seven phases in the last election.

West Bengal has in the past seen major political violence during elections, and accordingly, a huge deployment of security forces has been put in place to prevent that. The CEC said webcasting will be done at polling stations in critical and vulnerable areas, while adequate deployment of Central armed police forces will be ensured. He added that all critical and vulnerable areas have been identified and advance teams have already been deployed across the four states and one Union territory.

The CEC said that in view of the Covid-19 safety protocols, candidates can file their nominations online and voting will be allowed for an additional hour. Door-to-door campaigning will be restricted to five persons, including the candidate, while roadshows will be allowed with a maximum of five vehicles.