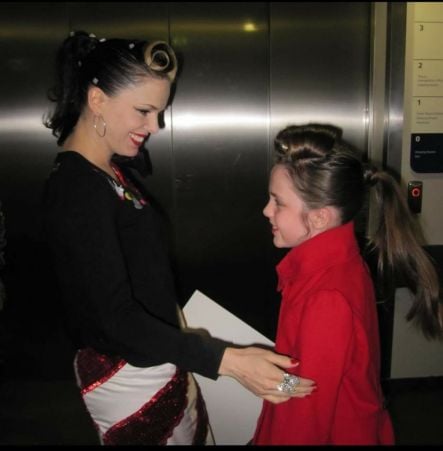 Imelda May and Hannah Roddy

A 17-year-old budding singer has won the chance to feature on Imelda May’s new album.

Hannah Roddy was chosen to sing backing vocals on 11 Past The Hour, due out in April, after her uncle successfully bid in an auction held by the London Irish Centre.

A long-standing fan of the Dublin-born songstress, Roddy joined May (46) over video call for a tutorial featuring tips on how to make it as a professional musician.

The pair previously met when Roddy was nine years old during a tour meet-and-greet event, and a photo shows the young girl featuring distinctive hair apparently styled after May’s own.

Both TV presenter Dermot O’Leary and singer Ed Sheeran are patrons of the London Irish Centre in Camden, north London.

Chart-topper Sheeran performed at the centre in 2018 and auctioned off his guitar for £20,000.

Established in 1954, it has since served as a home away from home for the Irish community and locals.

May has released the latest single from her forthcoming album, Made To Love, which features Ronnie Wood and feminist thinkers and activists Gina Martin and Dr Shola Mos-Shogbamimu.

She said: “I wanted this to be that song where, if you’re at a festival or a live gig, you can just throw your arms round that person beside you, can all dance around, sing together and feel connected. And I wanted that moment on the album.”

11 Past The Hour is out on Decca Records on April 23rd.

May will also embark on a UK tour in support of the record in April 2022.