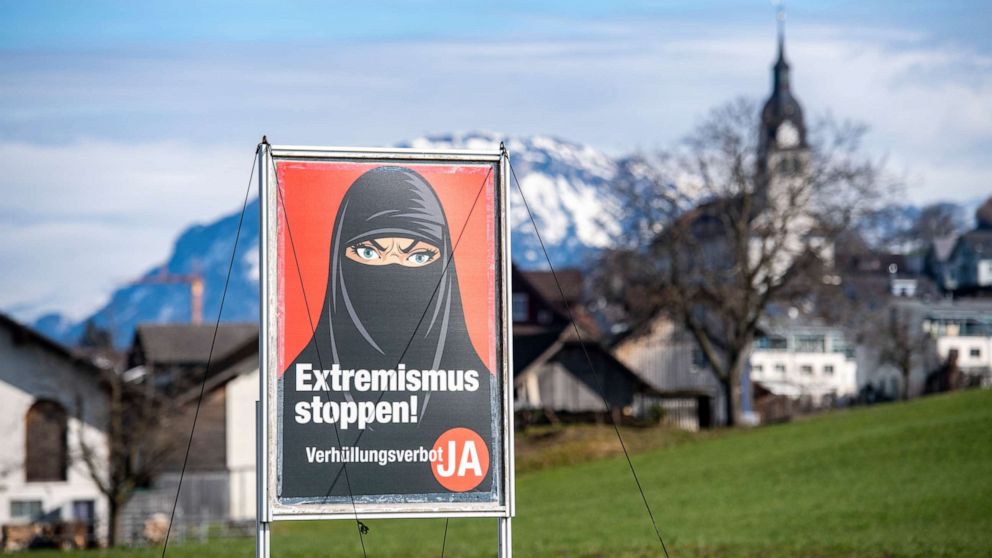 LONDON — Voters in Switzerland have narrowly approved a controversial proposal to outlaw full-face coverings in public.

A national referendum on the proposed measure was held Sunday and 51.21% of voters supported it, according to provisional results released by the Swiss Federal Council, which serves as the country’s federal government.

The measure will make it illegal for people in Switzerland to completely cover their faces in restaurants, shops, sports stadiums, public transport and even on the street. The ban includes burqas and niqabs, which are worn by Muslim women, as well as ski masks and bandanas, which are often used by protesters. There will be exceptions for religious sites, such as mosques, for “native customs,” like the Swiss traditional Carnival celebrations, and for health reasons, such as face masks to protect against COVID-19.

Swiss lawmakers now have two years to write up detailed legislation to enact the nationwide ban.

Switzerland joins a growing list of other European countries, including Belgium, Denmark and France, that have put similar bans into effect.

The proposal was launched in 2016 by the Egerkingen Committee, which is made up of numerous members of the right-wing nationalist Swiss People’s Party. The same group also initiated a nationwide ban on the construction of new minaret towers on mosques that voters approved in 2009.

The Swiss federal government had opposed the measure, arguing that full-face coverings are not an issue in the country and that such a law would harm tourism.

Meanwhile, rights groups have criticized the ban as discriminatory and dangerous. About 5.5% of Switzerland’s 8.5 million people are Muslim, according to the latest figures published by the Swiss Federal Statistical Office.

“After the vote to ban minarets, Swiss voters have once again approved an initiative that discriminates against one religious community in particular, needlessly fueling division and fear,” Cyrielle Huguenot, head of women’s rights at Amnesty International’s Switzerland office, said in a statement Sunday. “The ban on the full face veil cannot be viewed as a measure that liberates women. On the contrary, it is a dangerous and symbolic policy that violates the rights to freedom of expression and religion.”

“We call on the elected politicians and government to unequivocally support the fundamental rights of the country’s religious minorities and to commit to peaceful coexistence. The authorities must take action to ensure that the ban on the full veil does not marginalize the women in question or exclude them from the public space,” Huguenot added. “The authorities must now strengthen measures to protect women who are suffering real violence and discrimination in Switzerland, regardless of their religion and origin.”