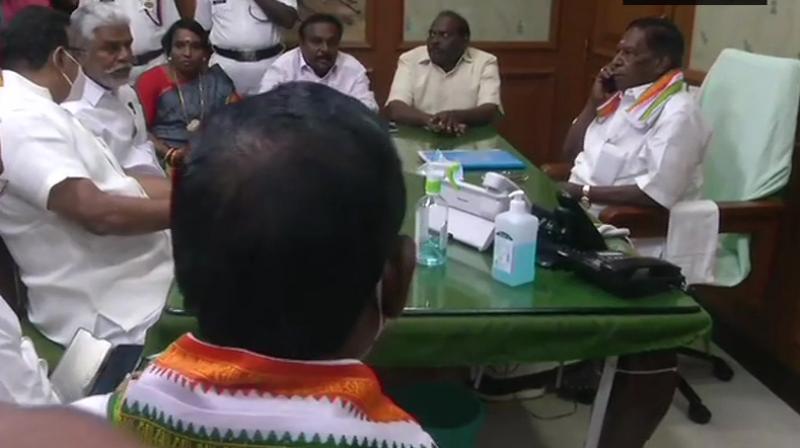 PUDUCHERRY: The spotlight will be on the beleaguered Puducherry Chief Minister V. Narayanasamy as he is slated to face a trust vote in the Assembly on Monday. Peeved by the resignation of DMK MLA Venkatesan as well as Congress legislator K. Lakshminarayanan deserting on Sunday, the CM may decide to put in his papers rather than face the Assembly where his government is clearly in a minority.

Coming out of a meeting of the Congress legislators late on Sunday night, the CM said that he would make his decision known after consulting allies but before the Assembly is to convene on Monday. The Congress has lost five MLAs over the last couple of weeks besides the party disqualifying one for anti-party activities. With the latest resignation of two MLAs, the ruling front’s strength has been reduced to 12 in a House with an effective strength of 26.

The resignation of the DMK MLA Venkatesan brings back to focus the strained ties between the alliance partners in the Union Territory where the Congress has been ruling for close to five years. With polls on the horizon in Tamil Nadu as well as the UT, ties are said to be at a breaking point with the DMK eyeing Puducherry as ground for trying to gain power on its own or in any other alliance it can hope to work out. The Pondy CM is said to be very unhappy with the silence of the DMK while desertion by legislators was going on unabated.

Apart from a statement on the removal of Lt Governor Kiran Bedi the DMK had said nothing about MLAs quitting the Congress as part of a destabilisation game being played in the UT.

With Namasivayam, who led the Congress to victory in 2016, leaving him and shifting to the BJP, CM Narayanasamy finds himself without too many friends. Lakshminarayanan, elected from the Raj Bhavan constituency, tendered his resignation to the Speaker at the latter's residence on Sunday, saying he wasn’t made a minister despite his seniority.