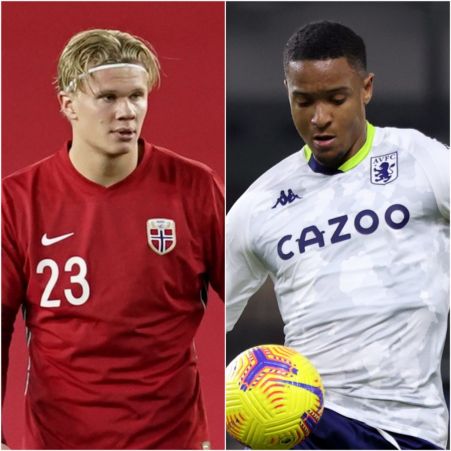 Erling Braut Haaland, who has been linked with a move to the Premier League, has been subject of interest from Bayern Munich, according to the Daily Mail. Manchester United are reportedly among the suitors for the 20-year-old, but it is said the Borussia Dortmund striker could remain in the Bundesliga.

Aston Villa will be looking to keep Ezri Konsa and will open talks about a new deal, writes the Daily Mirror. Liverpool and Tottenham are among the sides said to be interested in the 23-year-old.

Brighton and West Ham will do battle to sign Adam Armstrong from Blackburn, with the side looking to receive a fee north of £25million, according to the Sun.

Chelsea are keen to extend the stay of Andreas Christensen at Stamford Bridge, writes the Daily Telegraph. The 24-year-old Danish international will be offered a new contract by the club.

Meanwhile, Millwall will be looking to sign Luke McCormick from Thomas Tuchel’s side, says the Sun.

Kylian Mbappe: Liverpool will take on Real Madrid for the signing of the Paris St Germain forward should Mohamed Salah leave Anfield, reports AS.

Adama Traore: The former Barcelona forward will not be heading back to the Nou Camp as the LaLiga club would not be able to afford Wolves’ asking price, says Mundo Deportivo.

Adrien Rabiot: Manchester City and Everton will be looking to make a move for Juventus’ midfielder Adrien Rabiot, writes Tuttosport.