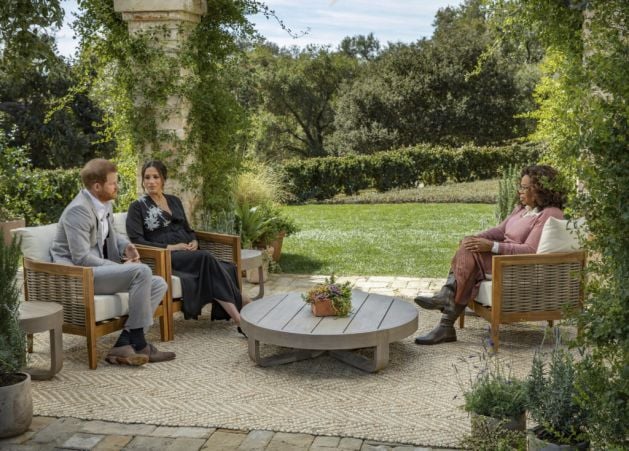 Harry and Meghan during their interview with Oprah Winfrey. Photo: PA Media

Oprah Winfrey has said the Prince Harry told her it was not the Queen or Prince Philip who made the racist comment about how dark their baby’s skin would be.

Speaking hours after the bombshell interview aired in the US, Winfrey said Harry had not told her which member of the royal family was involved in the conversation.

She told CBS This Morning: “He did not share the identity with me but he wanted to make sure I knew, and if I had an opportunity to share it, that it was not his grandmother or grandfather that were part of those conversations.

“He did not tell me who was a part of those conversations.”

The claim that there had been “concerns and conversations” before he was born about how dark Archie’s skin tone might be, was among a series of shocking revelations during Harry and Meghan’s candid interview, with the couple also suggesting the family were jealous of Meghan and revealing that she contemplated taking her own life while pregnant.

Appearing vulnerable at times, the duchess revealed that working for The Firm – as the royal family is sometimes known – ultimately left her feeling that ending her life was an option, and how she had not been protected by the monarchy.

Asked explicitly by Winfrey if she was thinking of self-harm and having suicidal thoughts at some stage, Meghan replied: “Yes. This was very, very clear.

“Very clear and very scary. I didn’t know who to turn to in that.”

Harry suggested his family were jealous of Meghan’s popularity with the public – just as the appeal of his mother, Diana, Princess of Wales, had reportedly been seen as a threat.

And he said he has become estranged from his father, the Prince of Wales, saying: “I feel really let down,” but added that he would make it one of his priorities “to try and heal that relationship”.

Describing how she had been misrepresented in the press, Meghan said the Duchess of Cambridge had made her cry ahead of her wedding – the opposite of reports circulating ahead of the Sussexes’ nuptials that Meghan left Kate in tears at Princess Charlotte’s bridesmaid dress fitting.

In a lighter moment, the couple, who announced in February that they are expecting their second child, said they are due to have a baby girl in the summer.

They also disclosed that they were married by the Archbishop of Canterbury three days before their formal ceremony.

Life behind palace doors has not been exposed to this degree since the days of the “War of the Waleses”, when the turmoil of Charles and Diana’s disintegrating marriage was laid bare in the 1990s.

Meghan told Winfrey she had got to the stage where she “just didn’t want to be alive any more”.

When she turned to the institution of the monarchy for help, her request was turned down.

“I went to the institution, and I said that I needed to go somewhere to get help.

“I said that I’ve never felt this way before and I need to go somewhere. And I was told that I couldn’t, that it wouldn’t be good for the institution.”

Harry was asked if he told his family that he needed to get help for Meghan, and admitted he could not talk to them: “That’s just not a conversation that would be had.”

He added: “I guess I was ashamed of admitting it to them. And I don’t know whether they’ve had the same feelings or thoughts. I have no idea. It’s a very trapping environment that a lot of them are stuck in.”

When Meghan brought up the subject of Archie’s skin colour causing “concern”, a stunned Winfrey was told it had been raised by a member of the royal family with Harry.

The duchess said: “That was relayed to me from Harry, those were conversations the family had with him, and I think it was really hard to be able to see those as compartmentalised conversations.”

When she was questioned by Winfrey on who had those conversations, Meghan did not give a name and said: “I think that would be very damaging to them.”

Harry was later asked about the episode and said: “That conversation, I am never going to share. At the time it was awkward, I was a bit shocked.”

He said he was “not comfortable” sharing the question he was asked by the unnamed person, but said it happened “right at the beginning” of their relationship.

In a damning comment, the duchess claimed the monarchy had double standards when it came to handling negative press stories – failing to protect the Sussexes but lying to defend other members of the royal family.

She said: “It was only once we were married and everything started to really worsen that I came to understand that, not only was I not being protected, but that they were willing to lie to protect other members of the family. But they weren’t willing to tell the truth to protect me and my husband.”

Harry was equally cutting about the financial support he received from family, saying they “literally cut me off financially” in the first quarter of 2020, and he went for the Netflix and Spotify deals to pay for his security.

He said he had what Diana left him and “without that we would not have been able to do this”.

He said he felt “trapped” while in the monarchy, and so were other family members: “My father and my brother, they are trapped. They don’t get to leave.”