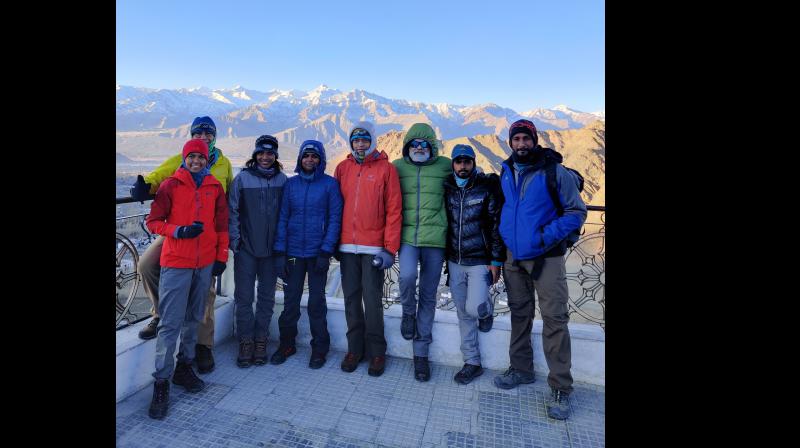 Even as mountaineers in the new world post the pandemic are still considering returning to the mountains, a 11-member team, led by Shekhar Babu Bachinepally and Kamalesh Thigulla of Transcend Adventures, successfully summited the 6,080-m Khadey Peak in the Tso-Moriri region of Ladakh, in the last week of February.

The climbers, belonging to different backgrounds including Hyderabadis, had set their aim on a particularly daunting target — Ladakh in winters is probably one of the harshest places on earth.

For the multifaceted Anupa, a kuchipudi trainer, triathlete and Karate Black-Belt holder (3rd Dan), who was also stepping out from her home, leaving her two children (an 11-year-old son and a 7-year-old daughter) for the first time, the arduous climb will remain an especially proud part of her life.

“Although my husband supported my decision to go on the winter expedition, the toughest part was to decide whether I wanted to actually go for it or not,” recalls Anupa. There was a lot of prep that went into achieving the feat too.

“I’ve been training in mountaineering for the last few months and I was keen to see how I’ve transformed. Moreover, mountains are a new challenge to me,” says Anupa, adding that she always had a special connection with the outdoors.

The 11-member team also included Ms. Poorna Malavath, the youngest girl in the world to have climbed Mt. Everest in 2014 when she was only thirteen years old. For the now 20-year-old mountaineer, this expedition was part of her training towards her aim of climbing seven summits in the world.

As a part of her prep for this summit, Poorna jogged and worked out daily. “Mountaineering is part of my life. My last expedition was in December 2019, so I wanted to get back to the groove as quickly as possible. While every mountain has a different set of challenges, considering that we had gained 1,200 meters elevation summit in a single day, it was a different experience,” Poorna says.

Talking about their itinerary, she adds, “We spent three nights in Leh to get used to the high altitude climate. And then, we slowly started moving towards higher elevations, closer to the base of the Khadey Peak.”

For the 24-year-old student, Anvitha Reddy, the thirteen-hour-long winter expedition was a great experience. Given the volatile weather, the descending part seemed treacherous for Anvitha, sometimes even impossible.

Giving an insight into the terrain, she says, “Ladakh is known for being a ‘high altitude desert’. Despite winter, this region has very little precipitation and hence almost no snow. The terrains were steep, rocky, unstable and unforgiving. To top it off, there was a continuous battering of wind ranging between 40–60 kmph with gusts as high as 90 kmph! We did not have a calm moment.”

Anvitha strongly believes that her training and experience is what ensured she safely reached the base.

It was 63-year-old Sunil Rallan from Chennai, who grabbed all the attention for his efforts. Surprisingly, this was his sixth expedition.

“I’ve been training extensively since last year to be expedition-ready. Deep inside, I wanted to go for it when I heard about this winter expedition” he tells us proudly, adding, "For me, going in a group was added motivation. The constant positive talk kept me in high spirits. Considering my age and COVID-19 times, it was a tough decision for my family members, but they were confident that I could pull it off."