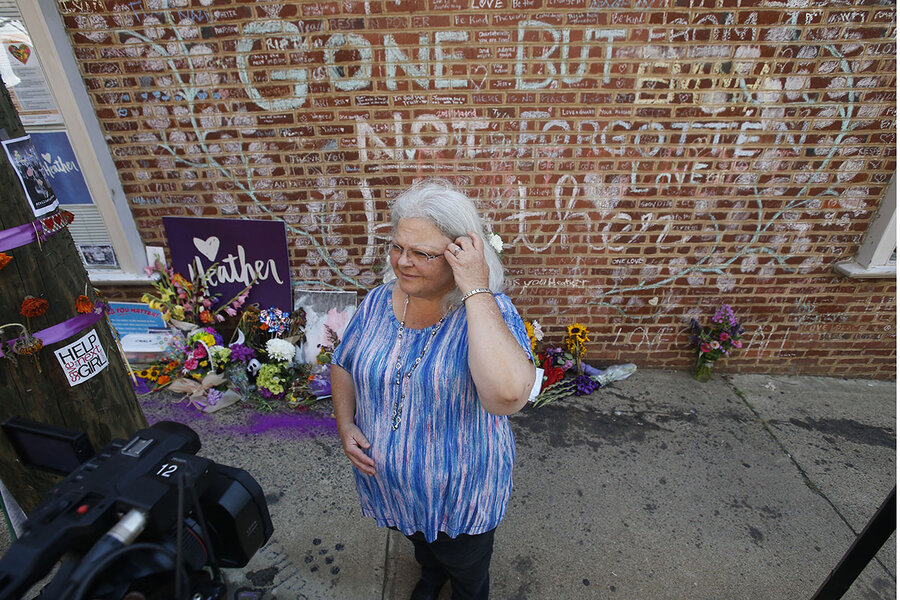 As the country investigates the Capitol riot, Charlottesville residents say their experience is what happens when the country ignores its barest divisions. Recovering from days as painful as Aug. 12 in Charlottesville or Jan. 6 in Washington requires addressing the circumstances that made them possible. To Ms. Bro, that involves regular citizens choosing to stay vigilant, and to heal, before more tragedies occur.

“Either someone dies or someone has their rights taken away, and then [regular people] begin to notice” the dangers of extremism, says Ms. Bro. “And I would prefer that we pay attention before either one of those happens.”

For many Charlottesville residents, watching the Capitol riot was like watching August 2017 echo in history.

Both were brazenly organized online, founded on a narrative of falsehood, and intensified by a sense of loss among the instigators. Both attracted a cacophony of far-right extremists resisting the democratic process – even featuring some of the same participants. Both ended in the loss of life due to violence.

“Watching the storming of the Capitol on January the 6th … definitely brought back memories of the scene in Charlottesville during the summer of hate,” says Claudrena Harold, chair of history at the University of Virginia and co-editor of “Charlottesville 2017: The Legacy of Race and Inequity.”

Perhaps most disconcerting in each event, though, were such abject failures of listening.

The Unite the Right rally crescendoed the long “summer of hate” in Charlottesville, preceded that summer by a Ku Klux Klan rally and tiki torch march led by Richard Spencer, a neo-Nazi and graduate of the University of Virginia. In addition to these public red flags, intelligence identified online warning signs ahead of time, says Timothy Heaphy, lead author of a report investigating the events in 2017, and university counsel for UVA since 2018.

“In Charlottesville, there was a lot of evidence available to law enforcement that there were going to be large numbers of people present at that event who were preparing for violence, and despite that, the plan didn’t prevent that,” says Mr. Heaphy. “I think we saw the same thing on January 6th.”

Virginia Democratic Sen. Mark Warner, chair of the Senate Intelligence Committee, noticed similar telltales ahead of the Capitol riot, saying he contacted the FBI and received assurances the situation was under control. He didn’t feel that way when listening to windows break while lying on the Senate floor.

In 2017, Senator Warner sponsored a resolution condemning the violence and calling for an investigative review. The same, he thinks, is necessary in response to Jan. 6.

“We’re just at the beginning of trying to really sort this through,” he says.

Legacy of slavery in America

White supremacy and violence driven by racial and ethnic animosity have a long history in America, of course. Slavery’s legacy has reverberated for more than a century and a half after it was ended by the Civil War.

In the South, white people seized back political and social control of their defeated homeland with organized terror, ending the period of Reconstruction. Jim Crow laws enforced that status quo. In 1898, a vengeful posse of white supremacists in Wilmington, North Carolina, ousted the city’s biracial leadership in the only successful coup on American soil. Fifty-six years ago Sunday, Alabama state troopers clubbed and tear-gassed marchers demonstrating for voting rights at the Edmund Pettus Bridge in Selma.

The perpetrators of the deadly 1995 bombing of the federal building in Oklahoma City were radicalized by white supremacist and anti-government propaganda. White supremacist Dylann Roof killed nine in the Charleston church shooting in 2015.

But in the current era it’s perhaps been easy to see incidents as individual tragedies, instead of parts of a larger pattern. Both Charlottesville and the Capitol riot are evidence of a spreading white supremacist terrorism problem, some experts say.

Making sure history doesn’t repeat itself again involves analyzing these events in tandem, says Emily Blout, a historian and adjunct professor of communications at Georgetown University.

In early January, Professor Blout published a study on the 2017 violence in Charlottesville, proposing a framework called “immersive terrorism.” Two days later she saw the same phenomenon in action at the Capitol, and took it as a sign that the warnings of 2017 had not been heeded.

“There’s a tendency and desire to move beyond this and just kind of forget,” says Professor Blout. “But we can’t.”

Anti-terrorism work, she says, rests on understanding the kind of extremism security wants to deter. In an era of resurgent white nationalism, it can be difficult to pick which dots to connect, says Michael Signer, mayor of Charlottesville from 2016 to 2018 and Professor Blout’s husband.

“Charlottesville was really the first perfect storm of all of this. But we have seen many other instances propagate since then,” he says, pointing to the recent confrontations in Berkeley, California; Portland, Oregon; Kenosha; and Washington.

Though the circumstances varied in each, they all featured a confluence of armed citizens, national grievances, and cultural warfare. Charlottesville may be the archetype, but its legacy is still changing.

“Charlottesville … has become one of those touchstones in modern American history, like Selma or like Hurricane Katrina or like 9/11, where it’s gathering dimensions as history grows,” says Mr. Signer.

“Charlottesville was really a turning point”

Former President Donald Trump showed how emboldening political approval can be for extremists, she says. But hate groups have been on the rise since Barack Obama’s presidency, according to the SPLC’s research. In a time so polarized that partisans increasingly endorse violence, the potential for conflict is out there.

“Charlottesville was really a turning point” for the far-right, says Ms. Corke. But, she says, neither it nor the Capitol riot is an “end of anything.”

Ms. Bro, who has spent the last four years mourning her daughter, can attest to that.

By 2017, Ms. Bro had been slowly learning about issues of white supremacy for years, largely thanks to her daughter’s patient teaching. Having seen where hate leads, she now finds herself teaching others in an effort to embolden well-intentioned but unaware Americans, who could calm the country’s politics.

Even if her daughter was terrified of public speaking, Ms. Bro sees her work as a way to honor Heather’s legacy. She wants to remind people that division is a choice, just like unity. That’s why, when white supremacists hector her on social media, Ms. Bro responds calmly. Everyone, like her, can still choose.

“It’s because of what I learned from [Heather],” says Ms. Bro. “I saw a dropped torch and picked it up and I ran with it.”