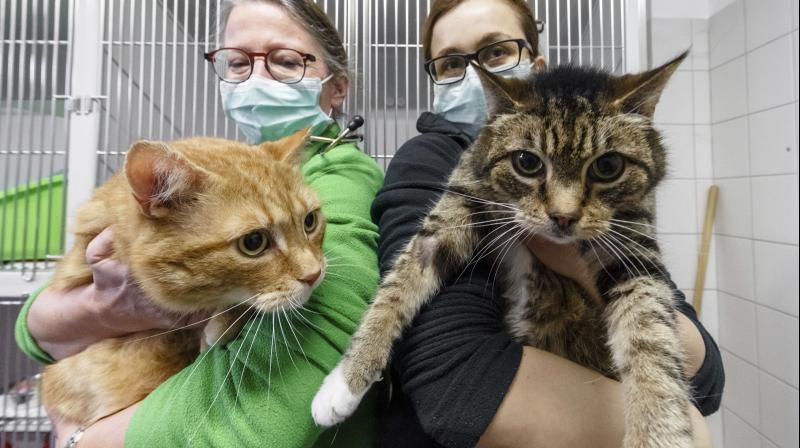 HYDERABAD: The sheer variety of animals — some that jostle for space with people, and the others that live in Indian forests — that are susceptible to catching Covid-19, is giving some scientists a serious cause for worry, especially in a country like India where officials privately admit to inadequate testing of people for the disease and underreporting of Covid-19 cases.

Monkeys, leopards, common buffalos, cows, goats, dogs, cats, Nilgiri Tahr, clouded leopard, and even donkeys and horses, all have something in common with humans when it comes to Covid-19. They carry the same ACE2 receptors, the biding cites in cells to which the SARS-CoV-2 attaches to as it multiplies and results in varying degrees of infection.

Sero surveys conducted in the country have consistently shown that the number of people who developed antibodies to SARS-CoV-2, which causes Covid-19, are much higher than the cases that have been discovered.

It was just last week that scientists from Centre for Cellular and Molecular Biology (CCMB), the National Institute of Nutrition (NIN), and vaccine maker Bharat Biotech, announced that 54 per cent of people in Hyderabad have developed Covid-19 antibodies.

Incidentally, in Telangana state alone, the total Covid-19 cases, according to the state health department as on Sunday, stood at 3,00,011. Hyderabad has a population of more than 10 lakh people and if the recently announced sero survey results are anything to go by, then at least 5,40,000 people in the city alone were exposed to, or contracted the virus. And there is no data on how many more could have been exposed by the undiscovered Covid-19 carriers either in the city, or in the rest of the state.

Among the animals on which candidate vaccine efficacy was tested at the National Institute of Virology (NIV) in Pune last year, were monkeys (rhesus macaques). According to studies published by scientists from Bharat Biotech, Indian Council for Medical Research (ICMR), and NIV, the tests showed that Rhesus Macaques can be infected by Covid-19 causing virus, after which the vaccines were tested on them for efficacy in battling the disease. These monkeys, caught in the wild in Maharashtra, were chosen for the tests for the simple reason that they have among the highest levels of ACE2 receptors among animals.

A study published in the Proceedings of the National Academy of Sciences of the United States of America (PNAS) as far back as in August last year, reported that 410 unique vertebrate species were identified as having ACE2 receptors. They include 252 mammals, 72 birds, 65 fishes, 17 reptiles and 4 amphibians. The study found that rhesus macaques, among other animals, were found to have at least 23/25 ACE2 residues identical to human ACE2 and other constraints at SARS-CoV-2 S-binding hot spots.

More than half of the animals that have Covid-19 susceptible ACE2 receptors jostle for space with humans – whether they are cattle, cows, dogs, cats, pigs, donkeys, horses, or even monkeys.

“The real fear is what if undiscovered Covid-19 carriers who interact with these animals pass on the virus to them? And what if the virus at some stage jumps back from these animals to humans? We have no system to monitor the health of people, whose lives are closely bound to these animals," a senior scientist told Deccan Chronicle.

Making matters worse is the way medical wastes, particularly used face masks, are discarded in public places and in garbage heaps, the latter which are visited regularly by stray dogs, and in some localities, pigs.

“Even more worrisome is the interactions between people and monkeys, with both species equally vulnerable to the virus. We do not know what is happening on this front. And this is a cause for worry. If the virus spreads to wild populations of monkeys, then there is no way of saying what might be in store later. We need a robust system to monitor what is happening among all these animals and people who interact with them," the scientist warned.