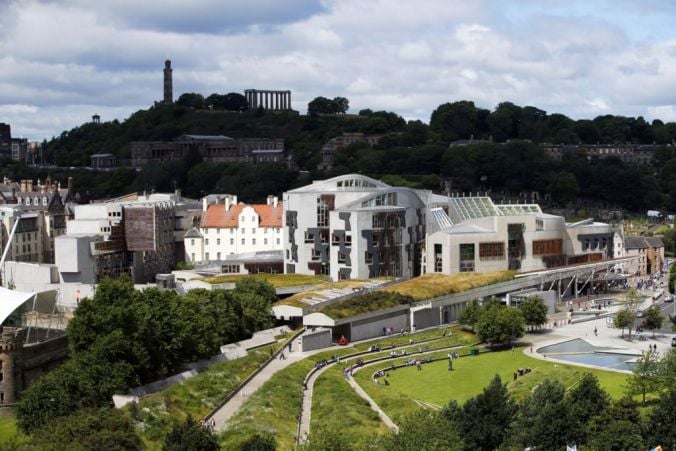 Concerns have been raised in a new report over what some see as the weakening of the Scottish Parliament. Photo: PA Images.

The UK government is seeking to “unpick” devolution in Scotland “under the cover of Brexit”, the Scottish Cabinet’s constitutional secretary has said.

Speaking in the foreword to a new report on Westminster’s approach to devolution, Mike Russell has again raised concerns over what he sees as the weakening of the Scottish Parliament.

The Internal Market Act, which he and others have described as a “power grab”, was singled out by the report as having a detrimental effect on devolution.

The report, commissioned by the Scottish Government, also singled out the Levelling Up and Shared Prosperity Funds – which would allow the UK government to provide funding in devolved areas without approval from the Scottish Parliament – as having a weakening effect.

A report published today by @scotgov shows the extent to which the Scottish Parliament’s devolved powers are being eroded by the UK Government following the 2016 Brexit vote.

Mr Russell said: “Bit by bit, the settlement that secured 74 per cent support in the 1997 devolution referendum is being unpicked under the cover of Brexit and without the consent of the Scottish people.

“This is not a big bang abolition of the Scottish Parliament. Westminster has instead put in train the slow demise of devolution in the hope that no-one will notice.

“The prime minister himself has called devolution ‘a disaster’.

“The Leader of the House of Commons has spoken of restoring the UK constitution to what he calls is its ‘proper form’ and has signalled his desire to ‘undo’ devolution.”

The report claims the views of devolved parliaments have been overlooked, as signalled by the disregarding of legislative consent motions – a non-binding vote in each of the devolved countries approving the UK government’s involvement in devolved areas – on Brexit and the Internal Market Act.

The Scottish, Welsh and Northern Irish legislatures all voted against approving the motion to consent to the final Brexit deal in early 2020, but the deal was nonetheless approved by Westminster.

The report said: “The UK government has sought to justify this on the grounds that the circumstances of EU exit were ‘not normal’ and that, therefore, it could proceed with these pieces of legislation without consent.

“However, on each occasion the UK government sought the consent of the Scottish Parliament, which indicates it was required for elements of each Bill.”

The report added: “The effect is that the UK government has shown it is willing to reshape the devolution settlement, unilaterally and in the most fundamental way, setting aside any rules of the UK constitutional system that it finds inconvenient.”

The report claims its findings reinforce the Scottish government’s view that independence is the “best future” for the country because successive UK administrations have not recognised the “scale and urgency of the need for change”.

It said: “These developments reinforce the Scottish government’s belief that the best future for Scotland is to become an independent country.

“This would enable a new and better relationship with the rest of the UK on the basis of mutual respect and equal partnership.”