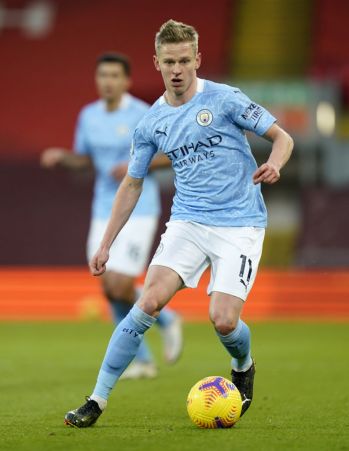 Premier League leaders City saw their 21-game winning run come to a sudden halt as they were beaten 2-0 by their arch-rivals at the Etihad Stadium on Sunday. Photo: PA Images

Premier League leaders City saw their 21-game winning run come to a sudden halt as they were beaten 2-0 by their arch-rivals at the Etihad Stadium on Sunday.

It was also quadruple-chasing City’s first defeat in 29 games in all competitions stretching back to November.

The result may only prove a blip in City’s apparent charge to the title, given they retain an 11-point lead over United at the top, and Zinchenko expects a response in Wednesday’s clash with Southampton.

The left-back said: “We have to win the next game, we have to be more focused. We are not allowed to go back. We have to go forwards.

“We are still playing in all competitions. We want to win everything this season and I hope we can do this.

“We are still alive and we can (afford) mistakes but we are going to come back stronger, I am pretty sure of that.”

Frustrating way to end our incredible run, but still very proud of what we've achieved so far. Good reminder that nothing is granted and we'll have to work hard until the end. On to the next one 💪🏾 pic.twitter.com/4MgnfA1m1I

City were on the back foot from the outset as United won a penalty with just 34 seconds on the clock. Bruno Fernandes converted and the visitors went close again through Luke Shaw in a bright start.

Zinchenko tested Dean Henderson with a fierce strike and Rodri hit the woodwork as City responded but United took a firm grip when Shaw doubled the lead after 50 minutes. It could even have got worse for City but Ederson produced a fine save to deny Anthony Martial one on one.

“It is all about how we started the game,” said Zinchenko. “To concede in the first minute is not easy to come back from.

“Afterwards I think we played much better than the opponent. We controlled the game, we created enough chances but we didn’t score. In this kind of big game if you want to win you have to score.

“United are also one of the best teams in the world, they have unbelievable players and they organise well defensively.

“It is not easy but still we have to learn a bit more how to come back in the game after these kind of situations.”

United’s victory seems unlikely to change the destiny of the title but it could revitalise them at a crucial time.

Ole Gunnar Solskjaer’s side had been criticised for their lack of spark after goalless draws with Chelsea and Crystal Palace in the past week.

They may have been in danger of being dragged back into a battle for a top-four place but they are now in outright second spot.

Captain Harry Maguire felt Solskjaer deserved a lot of the credit for victory.

Maguire told club media: “We have brilliant coaches and a brilliant manager and brilliant analysts as well.

“Credit to them because they are the ones who sent us out in that formation. We knew they were going to keep the ball at times and the positions that they find themselves in.

“We had to be patient at times but we had to make sure we kept getting up to the ball, kept getting contact, kept making tackles. I felt that we did that really well.

“For sure we can improve, we can do better in parts of the game, but it’s an important win, an important performance after a disappointing trip to London in midweek. Now we have to dust ourselves down and go again.”