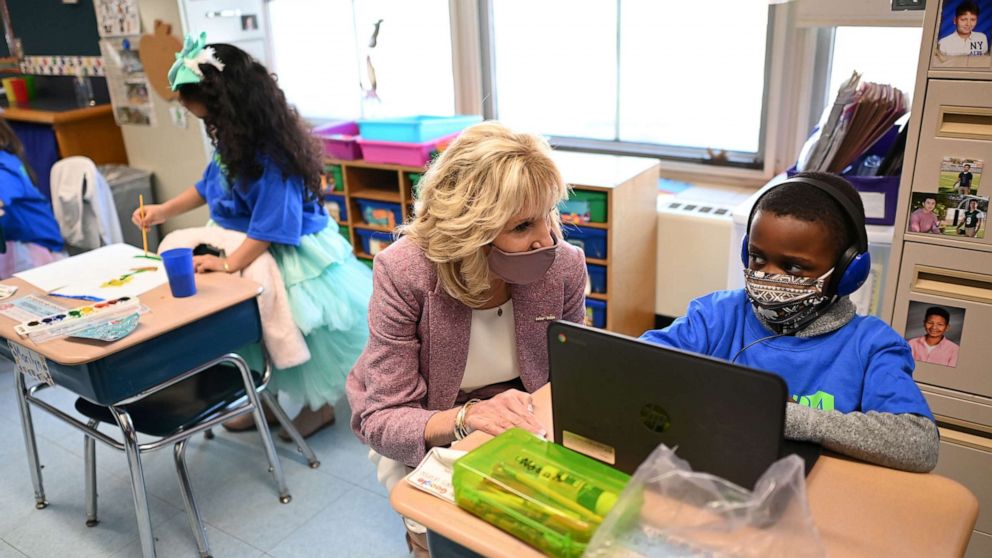 First lady Jill Biden began wading into the debate over reopening schools with a visit to two schools Wednesday in Connecticut and Pennsylvania alongside the newly confirmed Education Secretary Miguel Cardona.

The trip was meant to give Biden, a community college teacher, and Cardona an opportunity to see how schools nationwide are taking different approaches to reopening, as teachers, parents and school district officials grapple with how to get kids in classrooms safely.

At Benjamin Franklin Elementary School in Meriden, Connecticut, Biden stopped in a kindergarten room Wednesday before she and Cardona visited a sensory room without students to learn about the modified approach for special needs students amid COVID-19. Biden and Cardona then met with a second-grade teacher who started the year distance learning and then transitioned back to in-person learning, and spoke about her experience.

Biden — in remarks at the school — spoke about her own experiences as a teacher at Northern Virginia Community College this semester.

“Last week, I said to my students. How are you doing, and they said, ‘Dr B, We’re doing okay. But we can’t wait to be back in the class,'” she said. “And, you know, I think that’s how we all feel but we just know that we have to get back safely.”

Cardona lamented that future Lin-Manuel Mirandas and astronauts like Mark Kelly are sitting at home instead of going to the drama club or science labs, but he also highlighted the president’s actions on Tuesday to prioritize vaccinating teachers — drawing a loud round of applause.

In Waterford, Pennsylvania, Biden and Cardona visited Fort LeBoueuf Middle School and sat down with National Education Association President Becky Pringle and a small group of parents of teachers.

As the parents and teachers spoke, Biden took some occasional notes and asked follow-up questions.

“I feel like people feel that there’s light at the end of the tunnel,” she said in some closing remarks. “There is hope and I have to thank your governor for prioritizing educators to get the vaccine that was a big step and I can’t thank him enough for doing that.”

It hasn’t always been a smooth ride for the two schools Biden and Cardona were visiting Wednesday.

When the Meriden Public School District in Connecticut reopened last Fall, the local teacher’s union voiced concerns about safety protocols, worried about how teachers would enforce them, according to the Meriden Record-Journal.

“All the teachers want to return to normalcy, but trying to get children to wear masks all day is not a plan,” said Meriden Federation of Teachers President Lauren Mancini Averitt at the time.

Since last October, despite hiring additional teachers, social distancing and masking, the Benjamin Franklin Elementary School has reported a range of one to five positive COVID-19 cases on 11 separate weeks, according to Connecticut state coronavirus data. The school has slightly more than 350 students.

At Fort LeBoeuf Middle School in the small town of Waterford, Pennsylvania, full reopening began in September 2020 after the December COVID-19 surge forced the school to go hybrid. Currently, about 80% of students are attending in person, while 20% are virtual.

The district has seen a “substantial” level of community spread since early November, the highest level, and remains at that level this week, according to self-reported data. The school currently has one positive case and eight students in quarantine. Overall, they’ve had 1,359 students quarantine at some point across the district since they reopened in September.