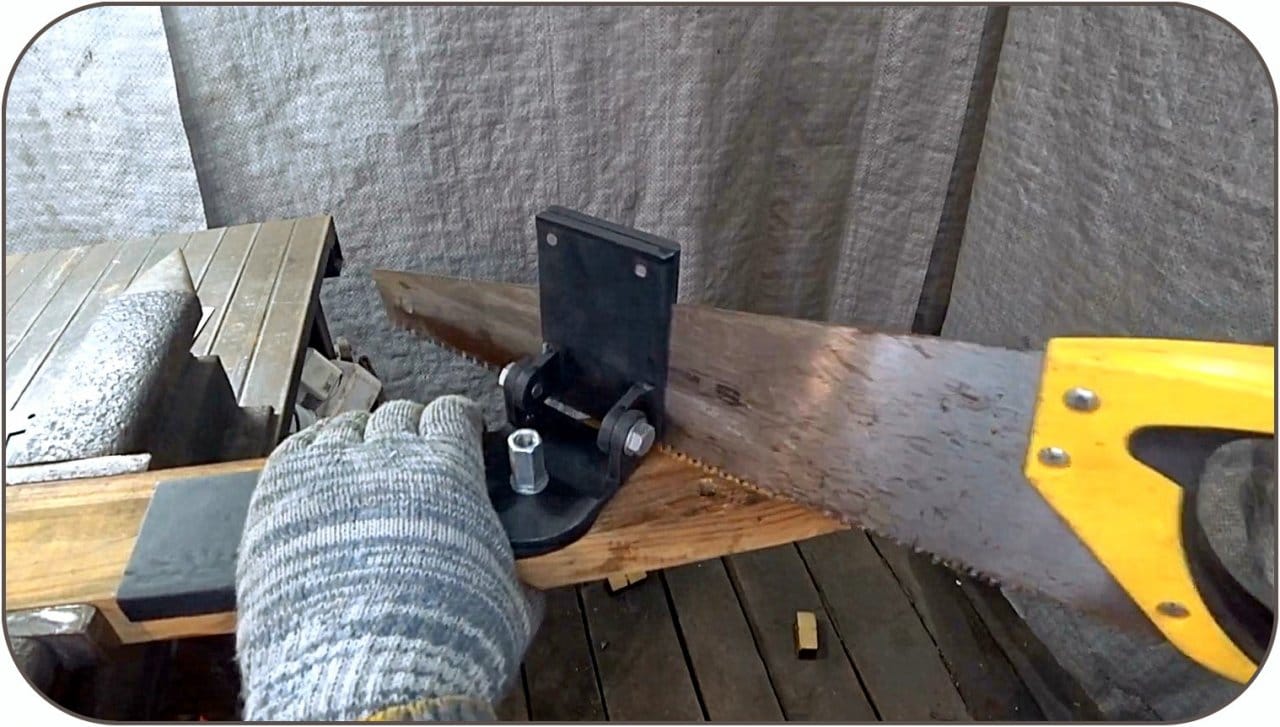 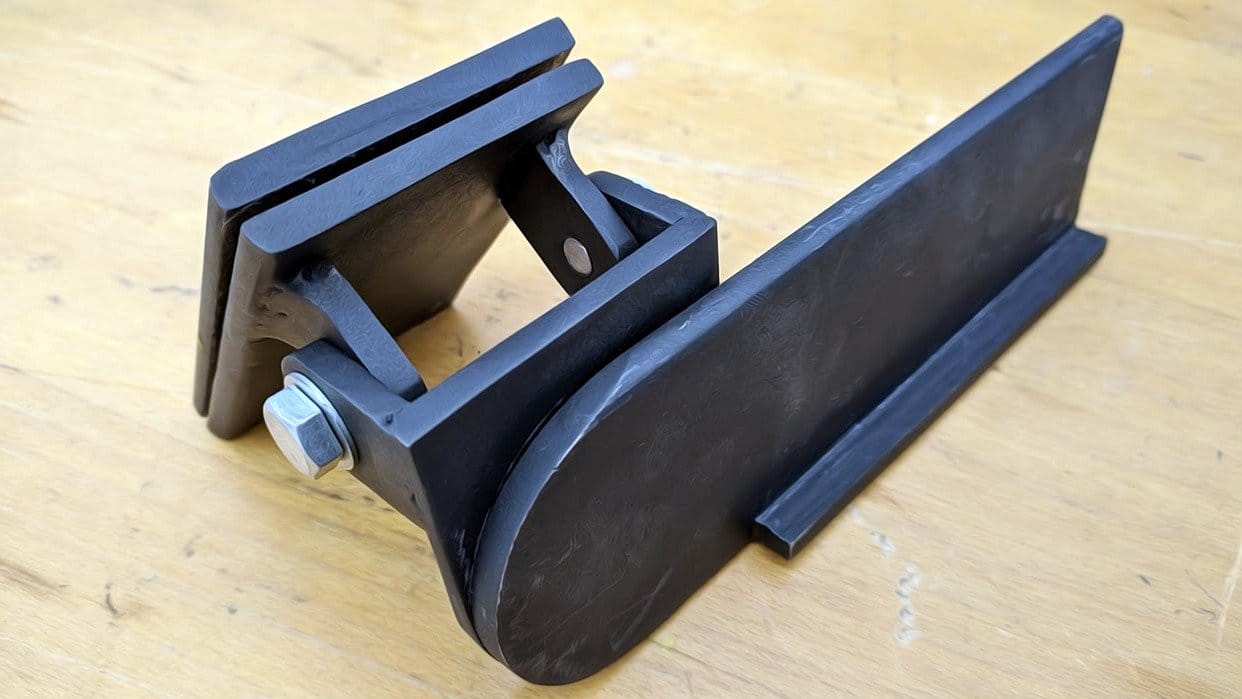 Many of you have experience in cutting beams, boards, and other wooden materials. It is practically impossible to cut off the end face by hand without special devices.
To solve these problems, modern workshops are equipped with a miter saw. However, not everyone can afford to purchase such a machine, and it is difficult to use it at home.
Of course, there is also a classic joinery called wort. Often they are made of wood or plastic – for this reason, its service life is not very long.
In this article, Viktor Nikitin, the author of the YouTube channel “RotorCore”, will tell you how he made his own kind of miter box that tightly controls the saw blade and the cutting plane. In contrast to the classical version, in this device the inclination of the web can be adjusted in two planes at once, and very complex trimming operations can be performed.
This project is quite simple to manufacture. Despite the welding used in this case, you can do without it.
Materials necessary for home-made.
– Steel angle 63 × 63 × 5 mm
– Elongated nut, washers, stud m8
– Circle cut-off, flap stripping
– Welding wire.
Tools used by the author.
– Bulgarian
– Drilling machine
– Welding machine, magnetic corners
– Multifunctional guide for drill
– Protractor
– Ratchet tap holder, tap, semi-automatic core
– Caliper, square, marker, vise, file .
Manufacturing process.
A piece of steel angle 63 × 63 mm, rib thickness 5 mm, will serve as the base of the miter box. 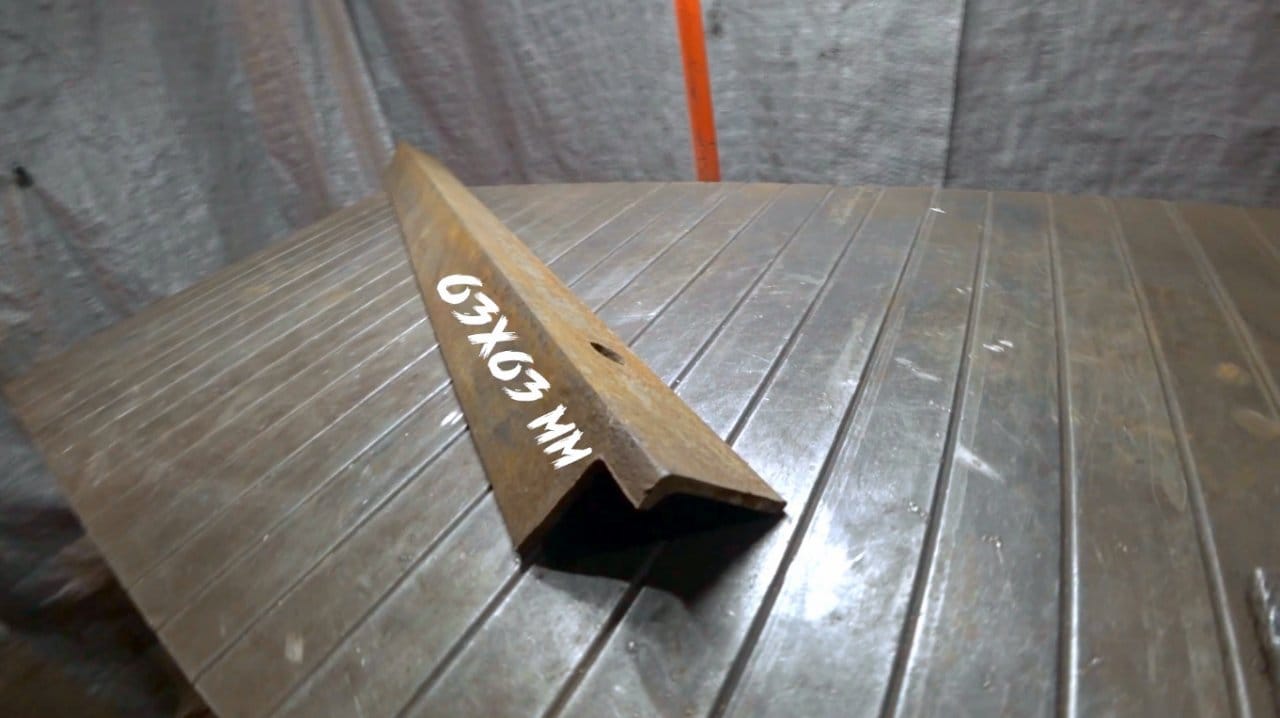 Having completed the markup, the author fixes the corner in a vice and cuts off the workpiece 200 mm long. 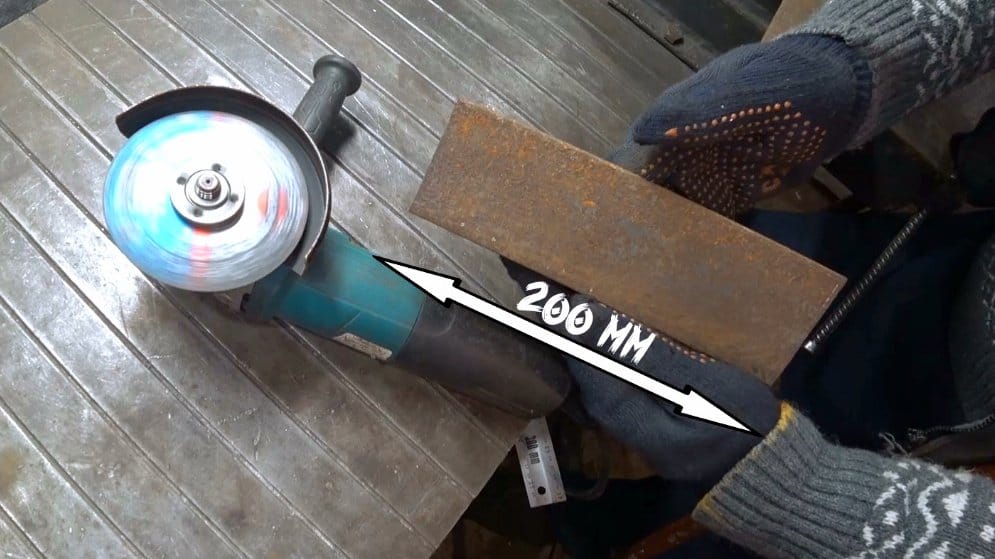 Since this part will play the role of a guide and a stop, you need to remove the rounding in the corner. This is necessary so that both inner planes of the corner fit snugly to the 90-degree corners.
Here the same grinder , but with a sharpening disc.
Burrs and small irregularities are removed with a file.

From one wall of the corner, the master forms a platform, a small sill for an emphasis. Marking is done using a square and a caliper.
Dimensions are shown in the following photo. 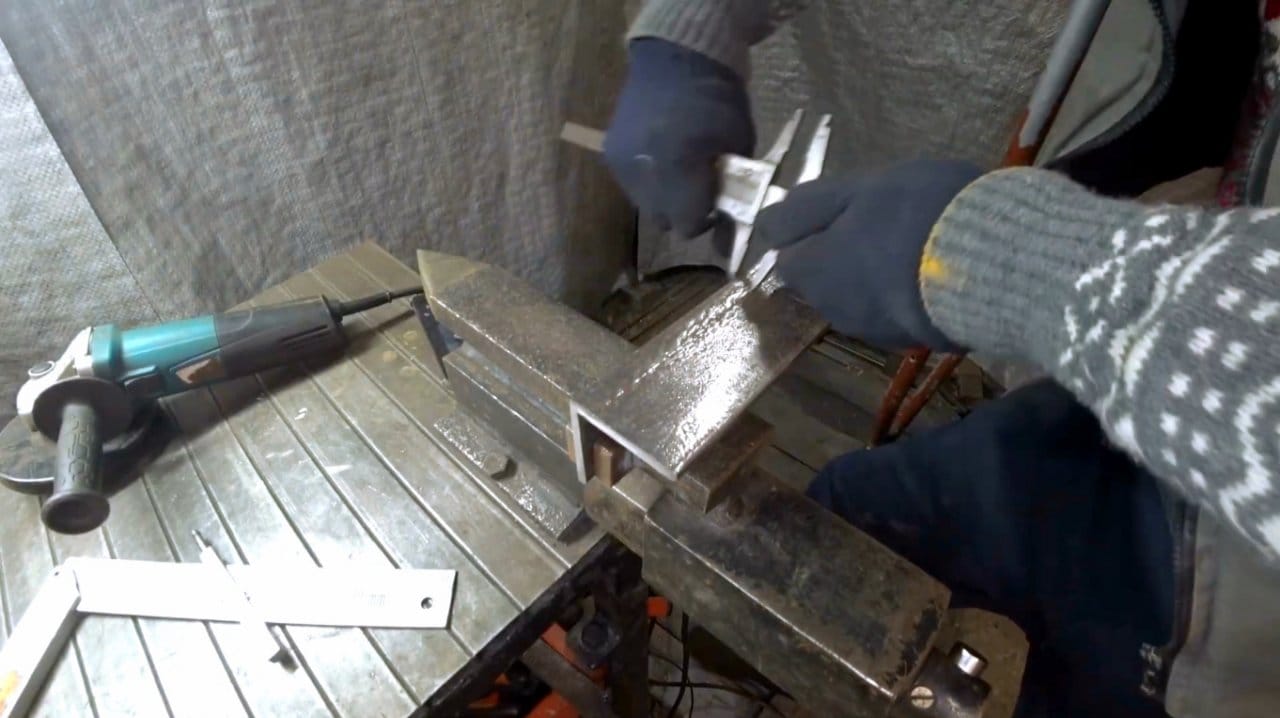 Next, the center of the future hole for the axis of the turntable is outlined and punched. 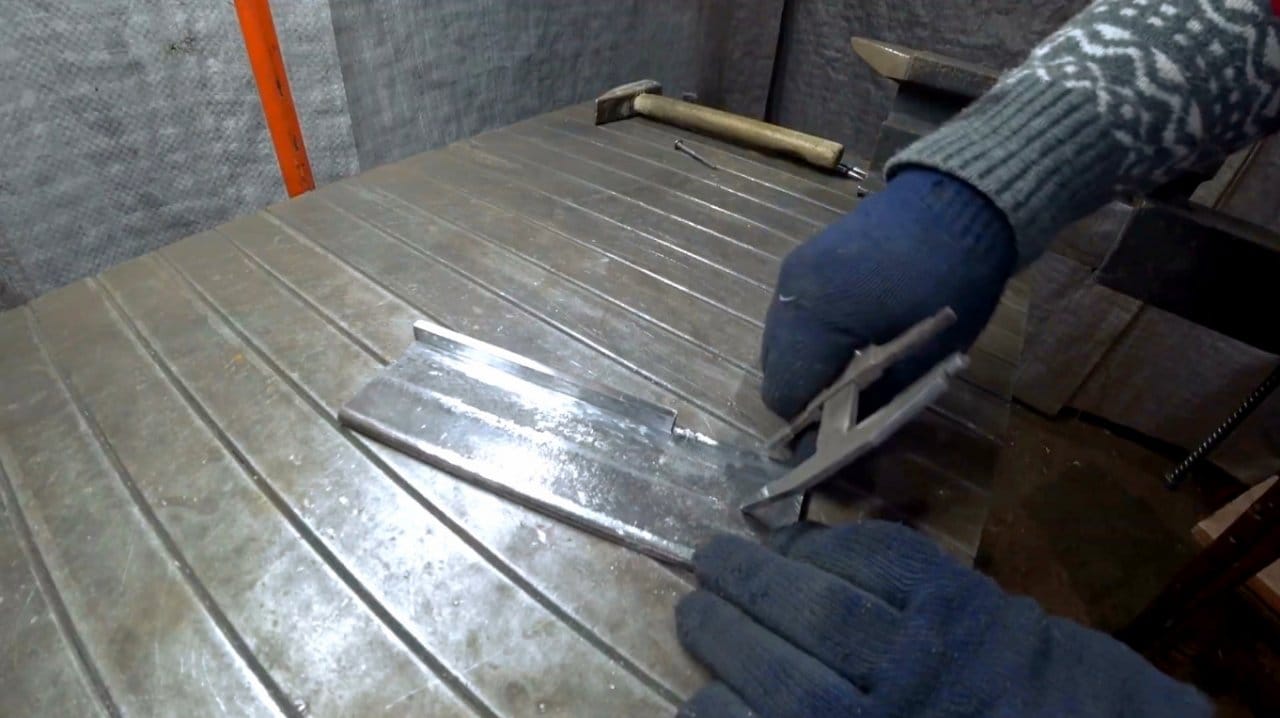 The hole is drilled on a drilling machine. Here you need to observe perpendicularity, and instead of the machine, you can use a screwdriver or drill with a special guide .
The edge of the base, near which the hole is drilled, is rounded off.
First, the corners are cut off with a cutting disc, and then they are aligned with a petal. 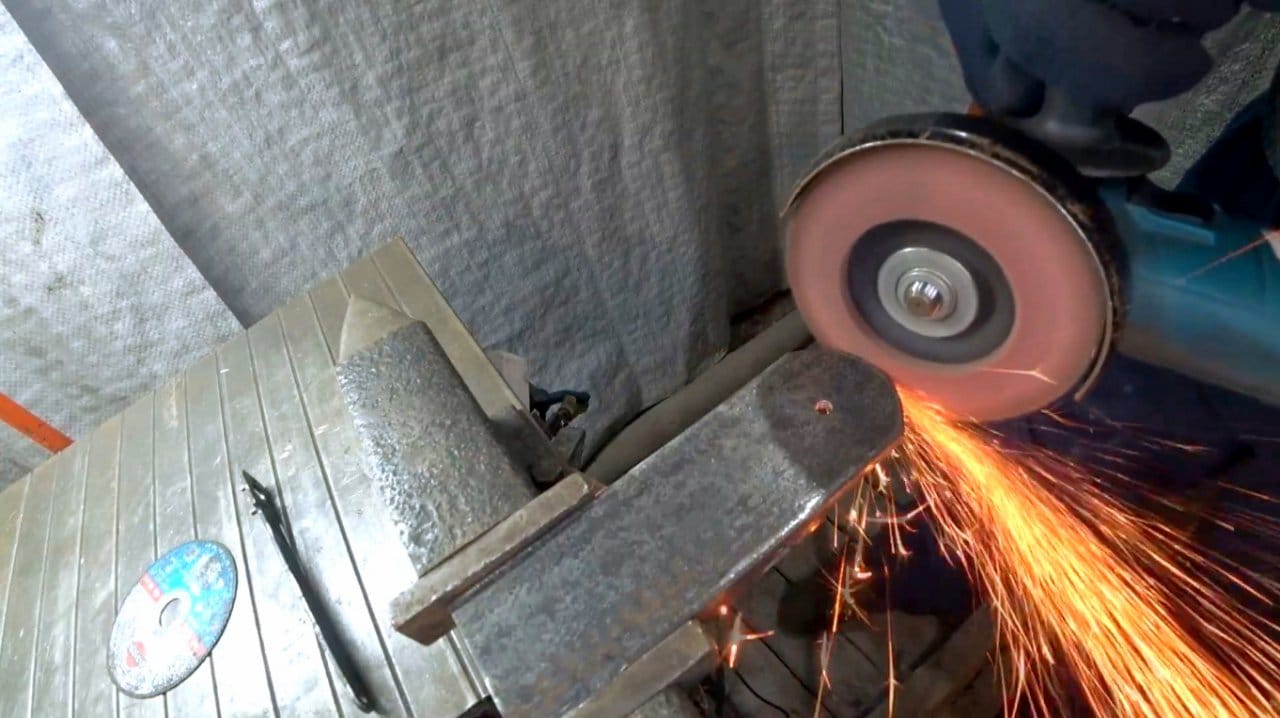 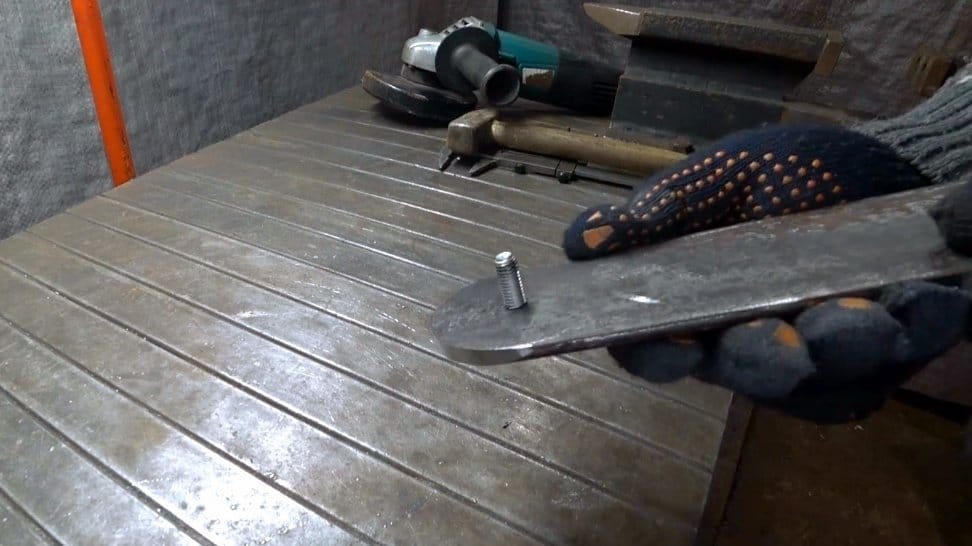 From the side of the sole, hairpin adhered to the base by welding, and the seam is cleaned. The surface of the sole must be flat. 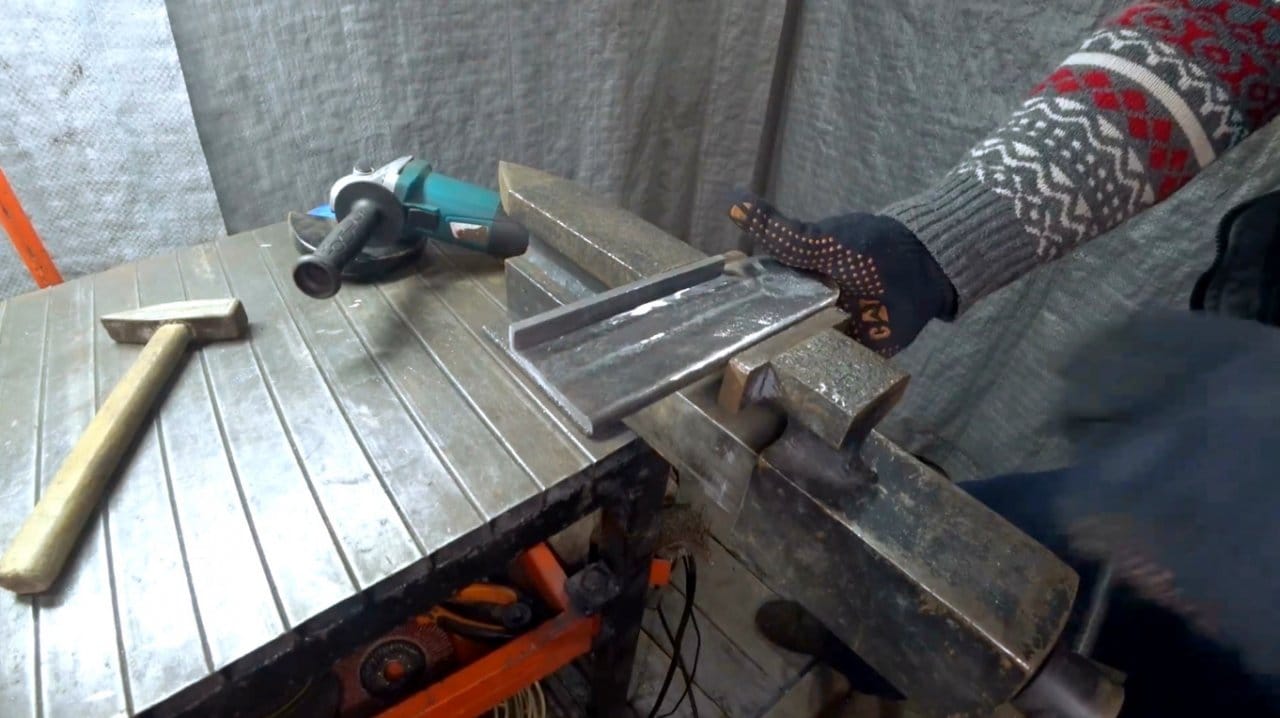 Now we need to make a guide for the hacksaw blade. From the same corner, or steel strip, the master cuts two rectangular plates measuring 63 × 100 mm. 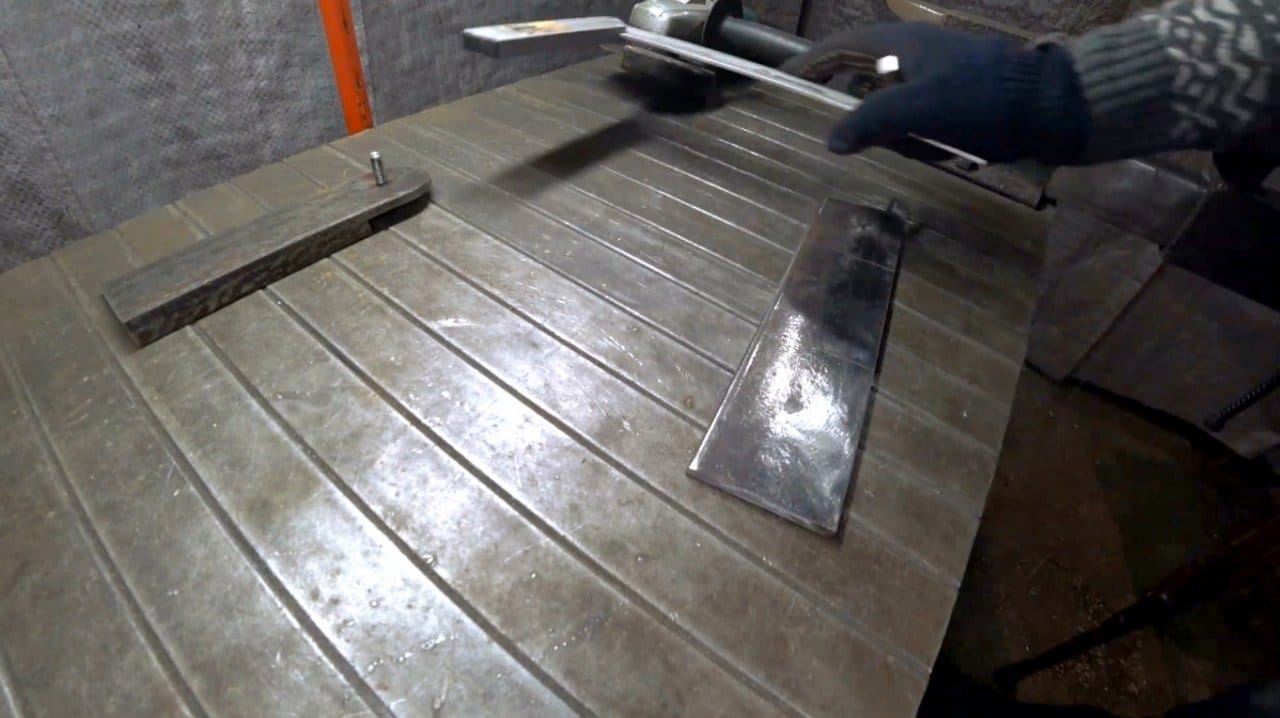 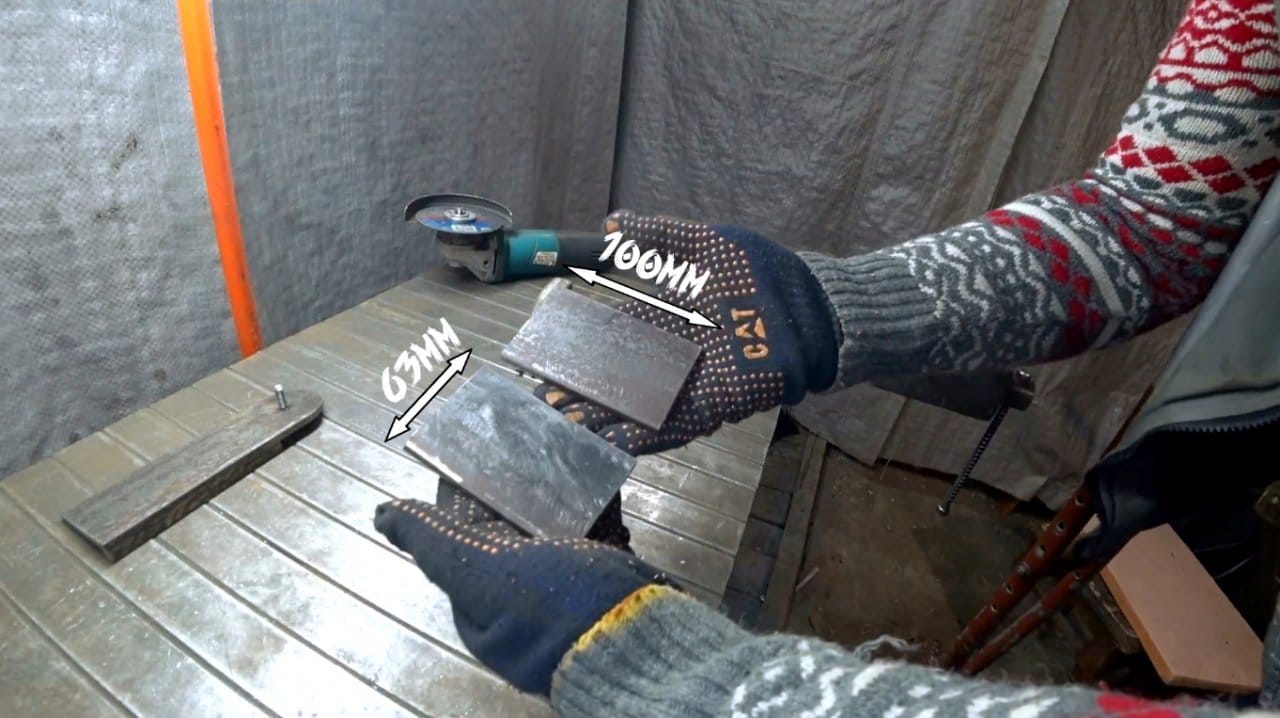 Holes are drilled in the two corners of both plates. In the holes of the first of them, a thread m4 is cut, and in the second plate, a sweep is made for the heads of screws m4. 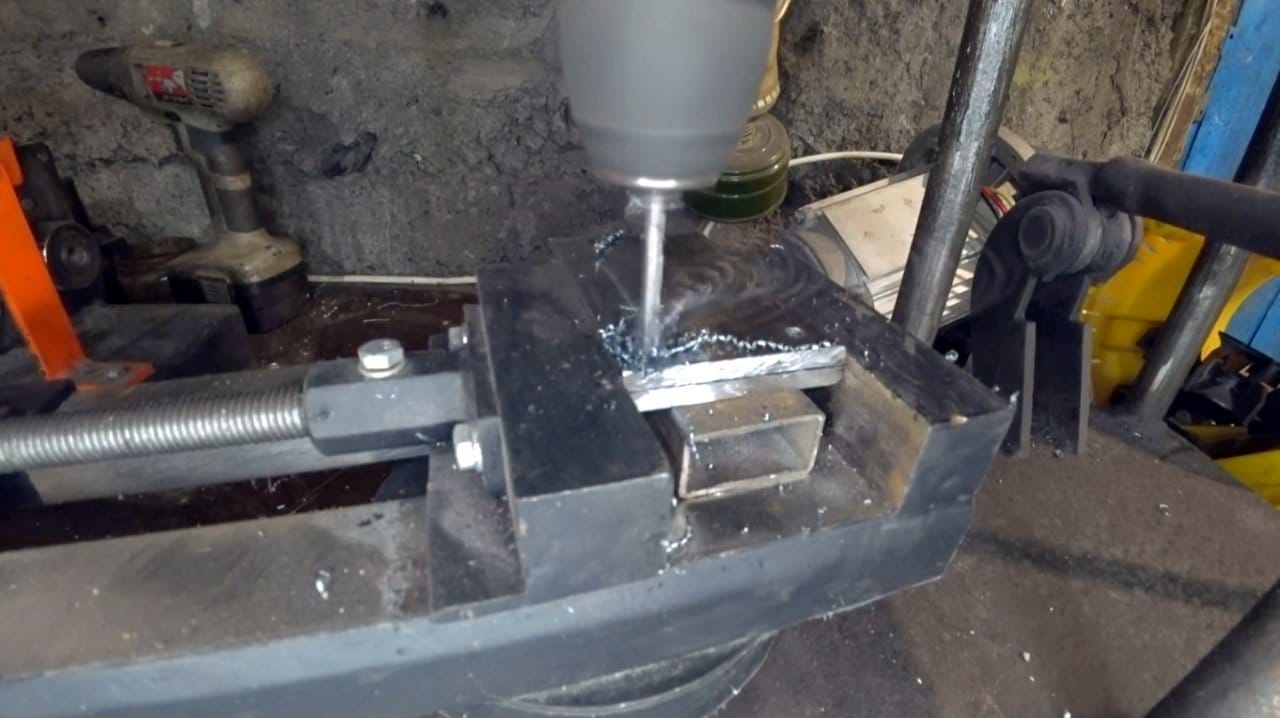 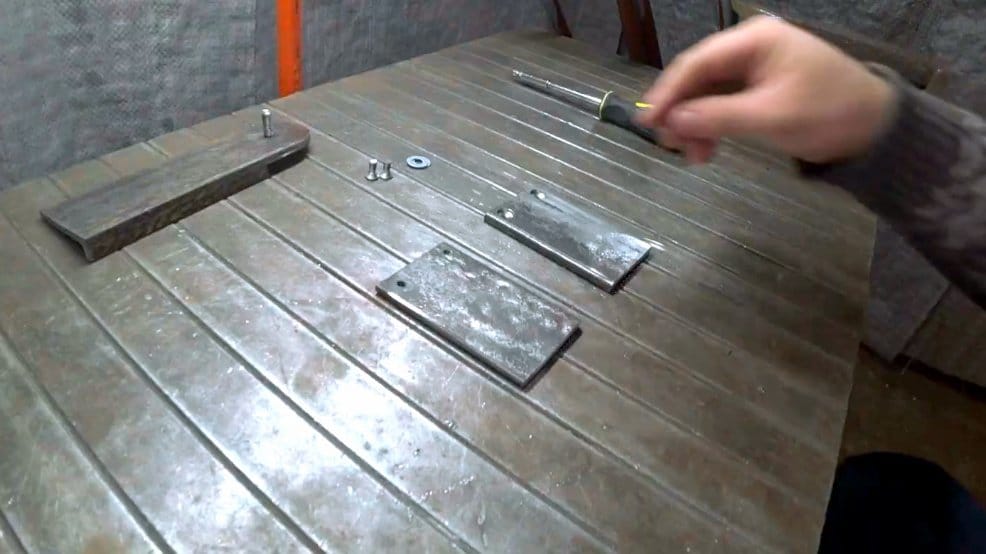 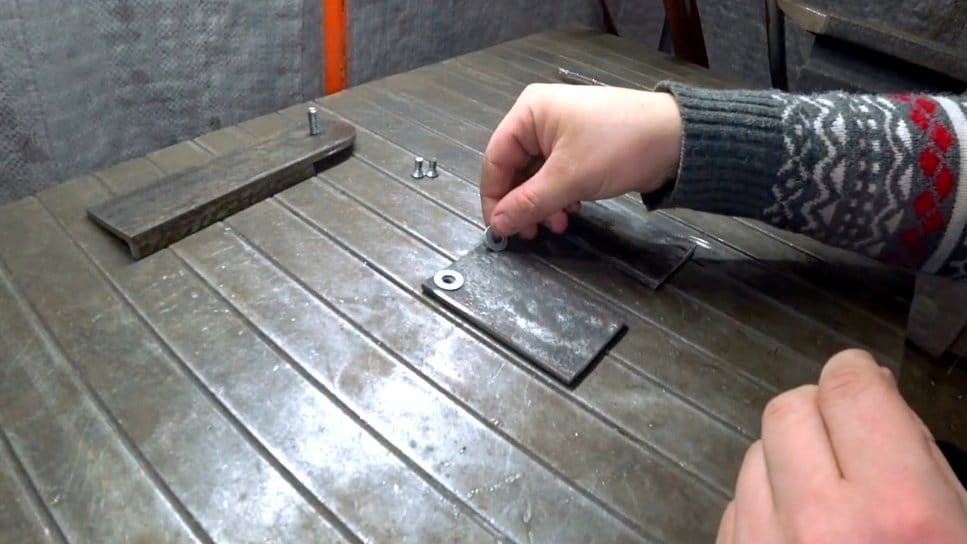 In the resulting gap between the plates and the canvas of the hacksaw will walk. 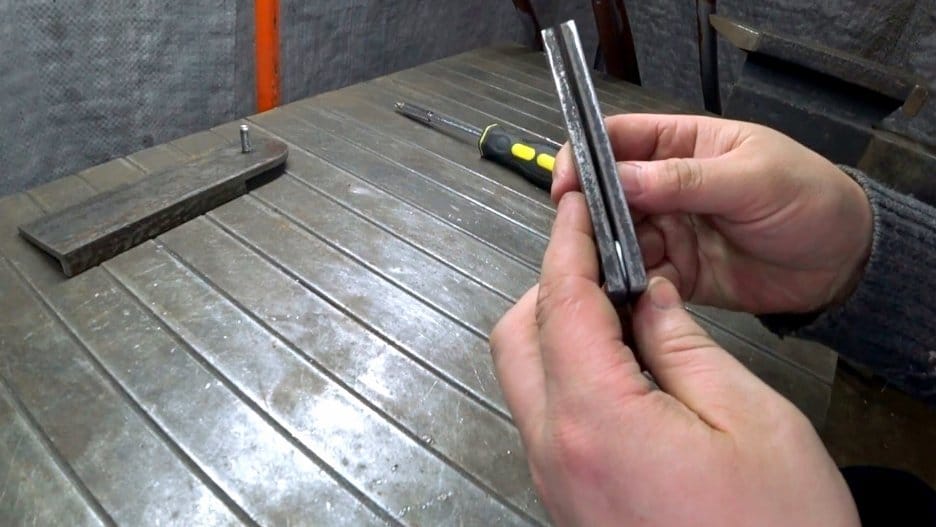 Next, four identical rectangular blanks are cut out of a 140 × 25 mm strip. 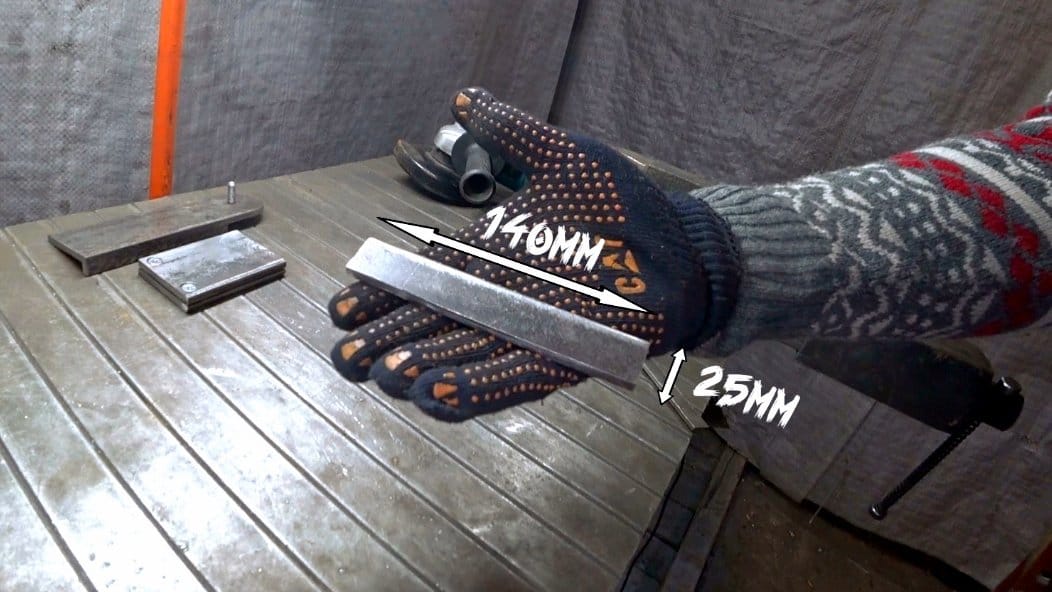 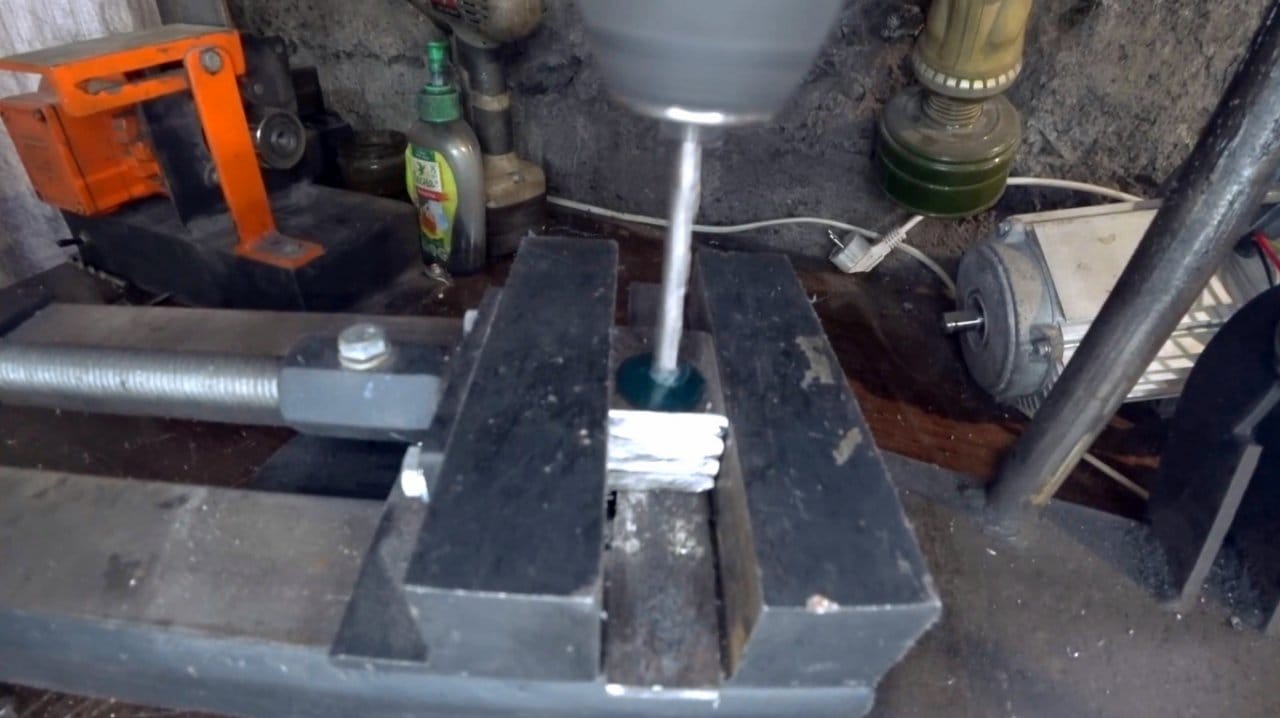 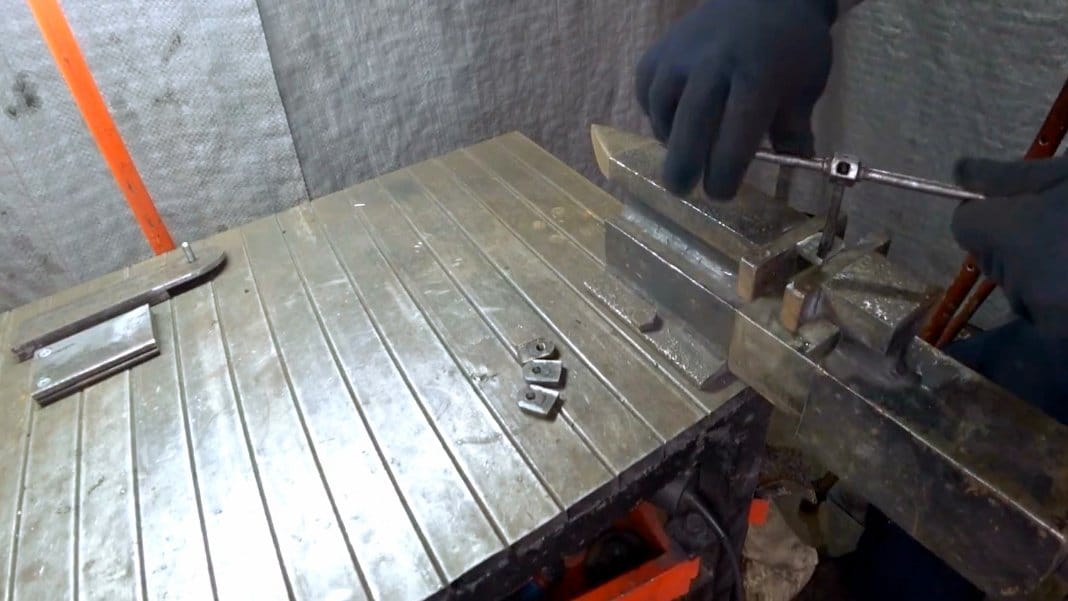 Two hinges are assembled from the obtained parts. They are connected with m8 bolts. 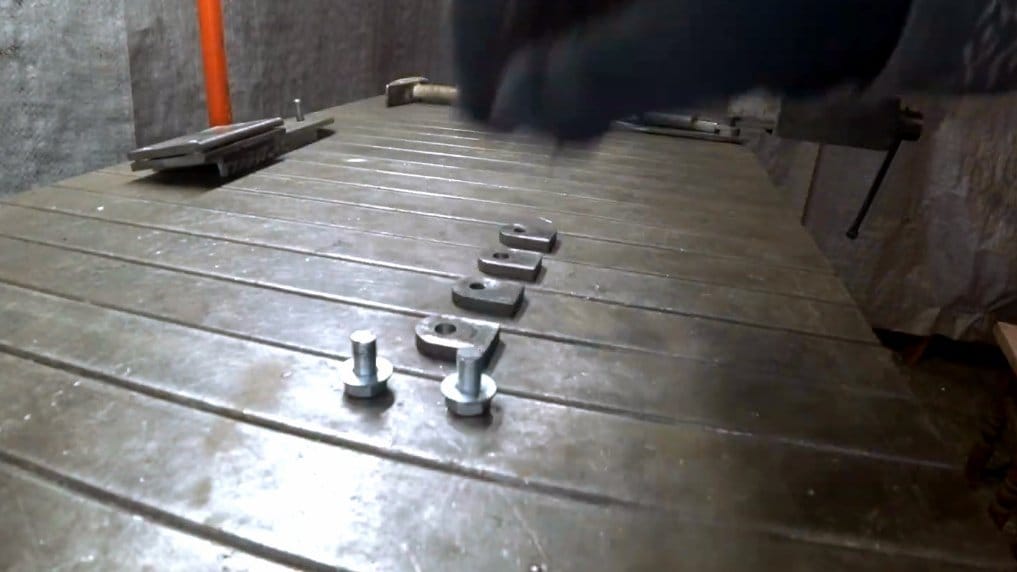 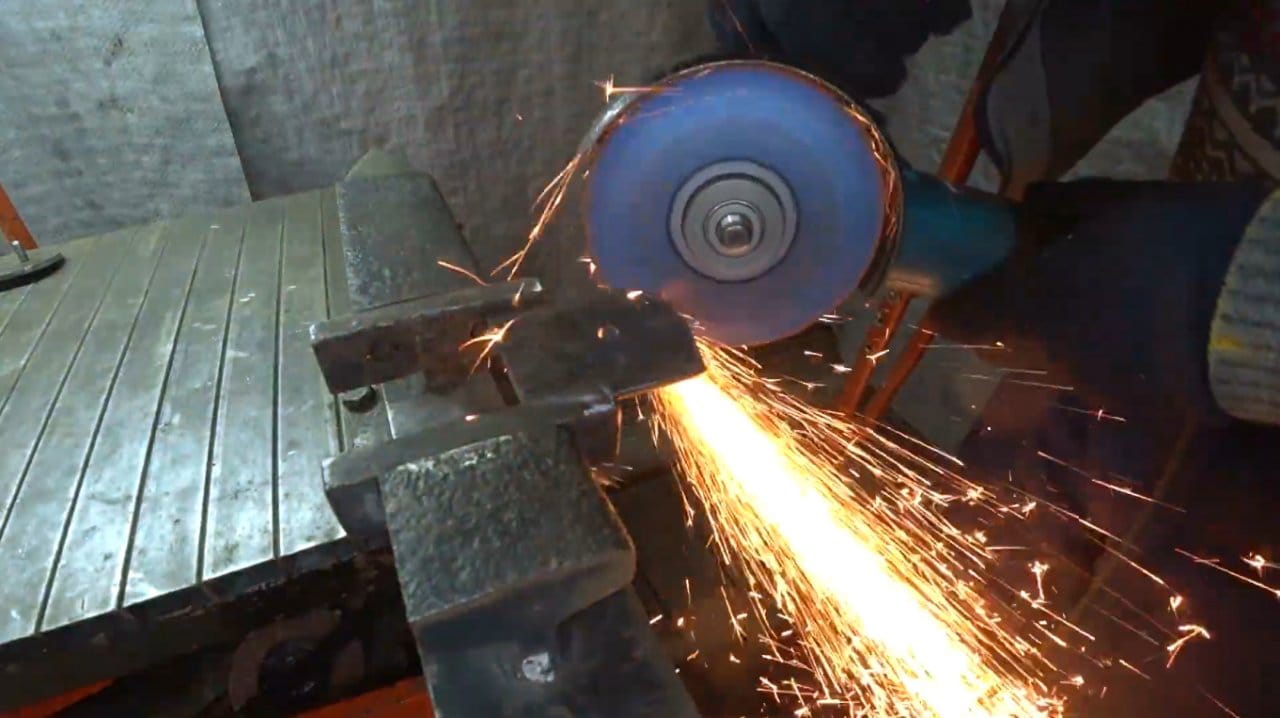 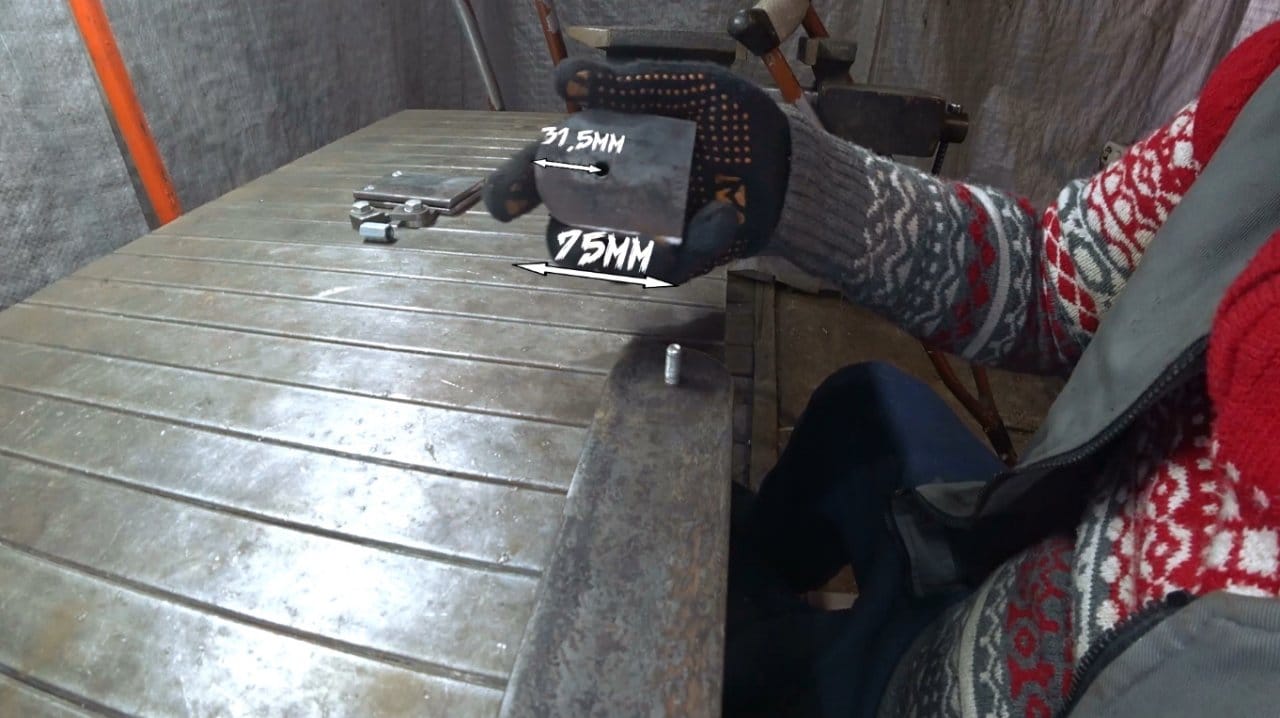 Using a welding machine, the master connects the turntable and the guide through the hinges.
Of course, you can make the base and turntable out of plywood. Then, instead of hinges, you can use ordinary corners. The guide itself should remain the same.
All the details are ready, now the surfaces need to be cleaned and painted .
You can also burnish parts – this coating is scratch-resistant compared to paint. A simple steel burnishing technology was described in detail in a recent article .
So, the device is assembled and ready to work. This is what the outsole looks like with support.
The first degree of freedom is provided by a turntable.
every time you do not measure the desired angle of rotation, in this unit you can adapt such a protractor. 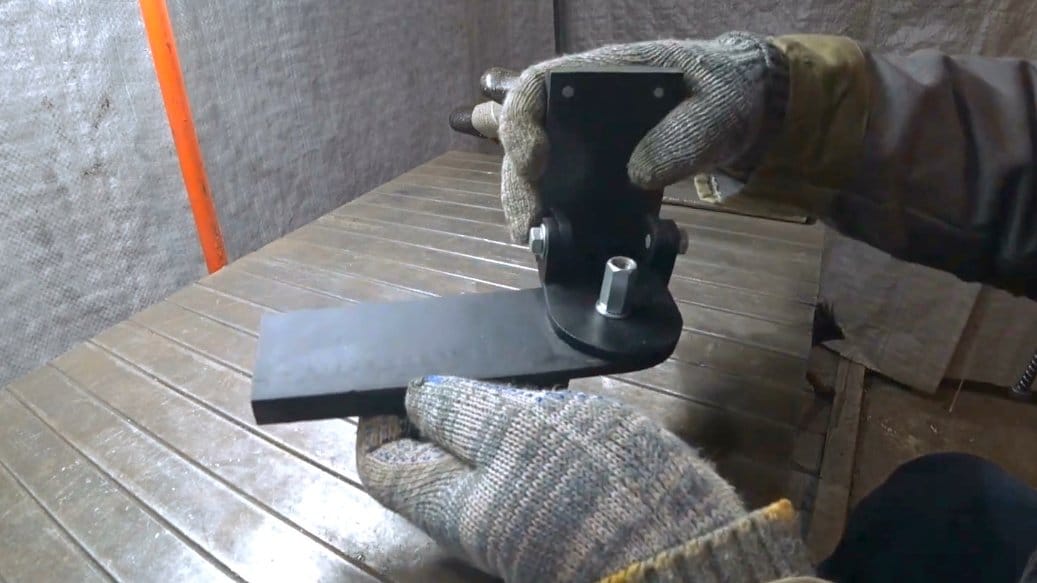 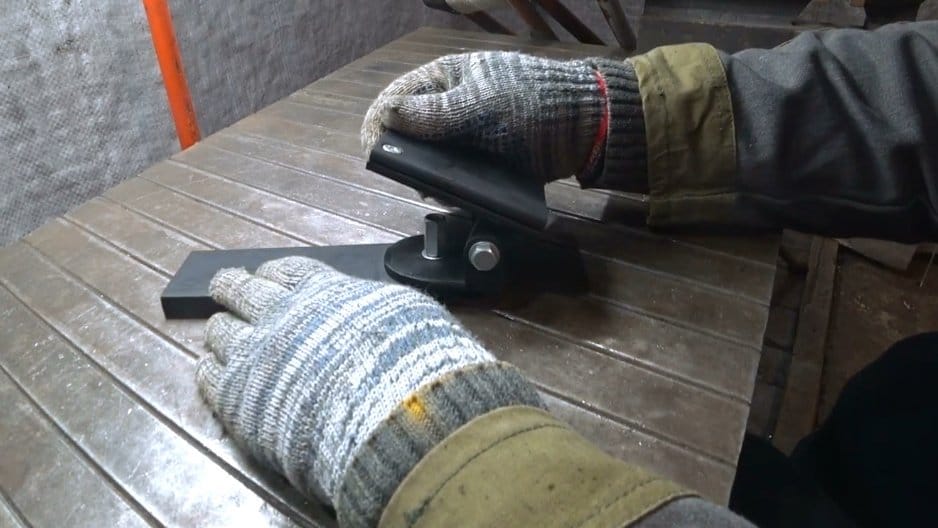 The master carries out the first trial cut at right angles. 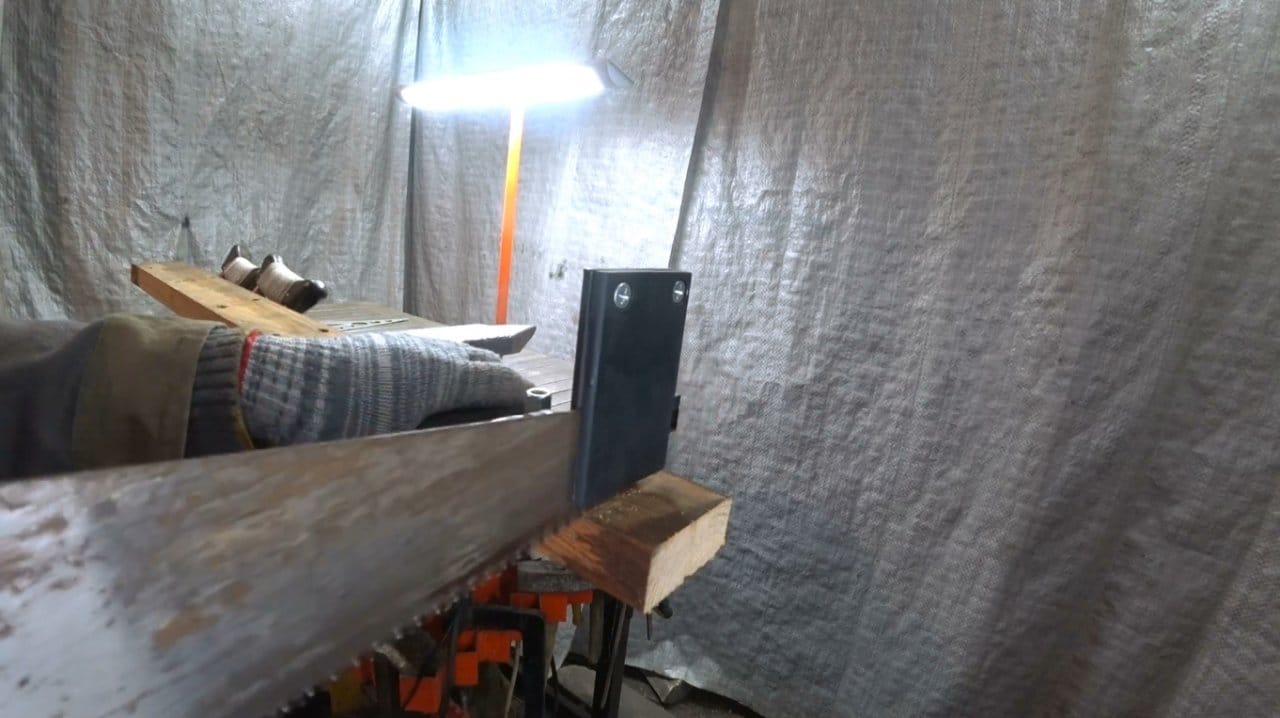 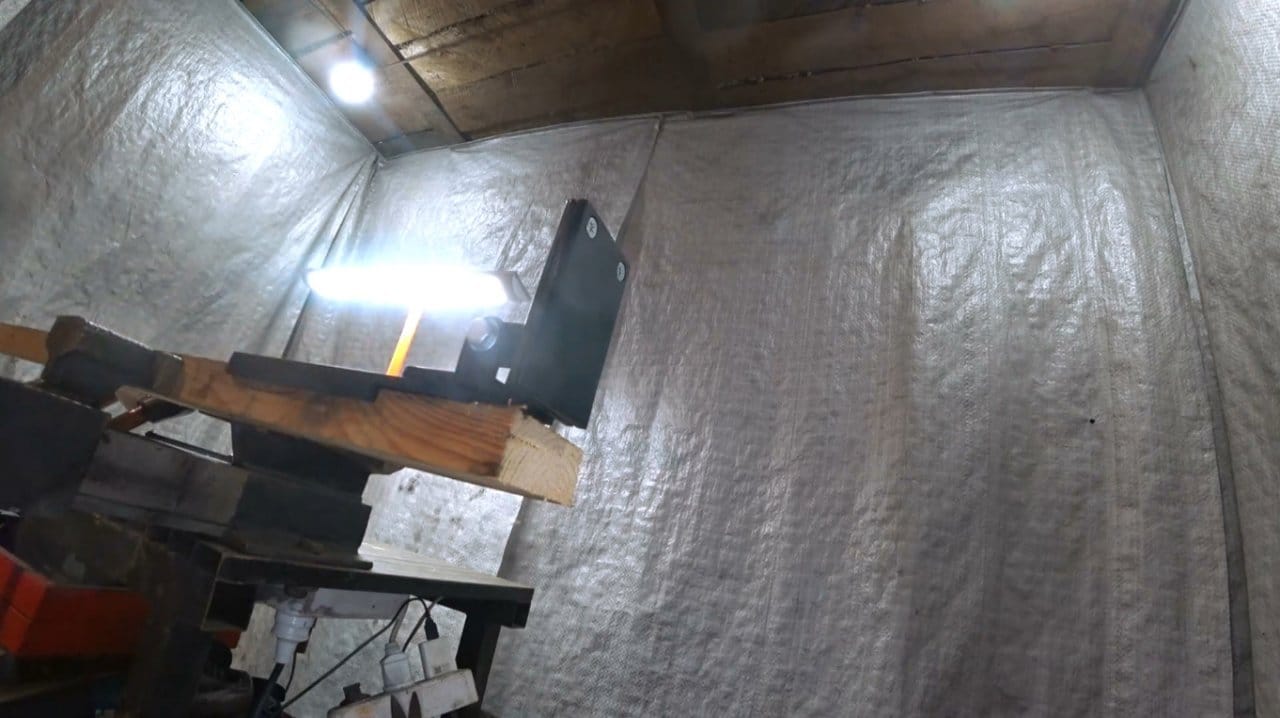 As you can see, an angle of 90 degrees was obtained in two planes at once. 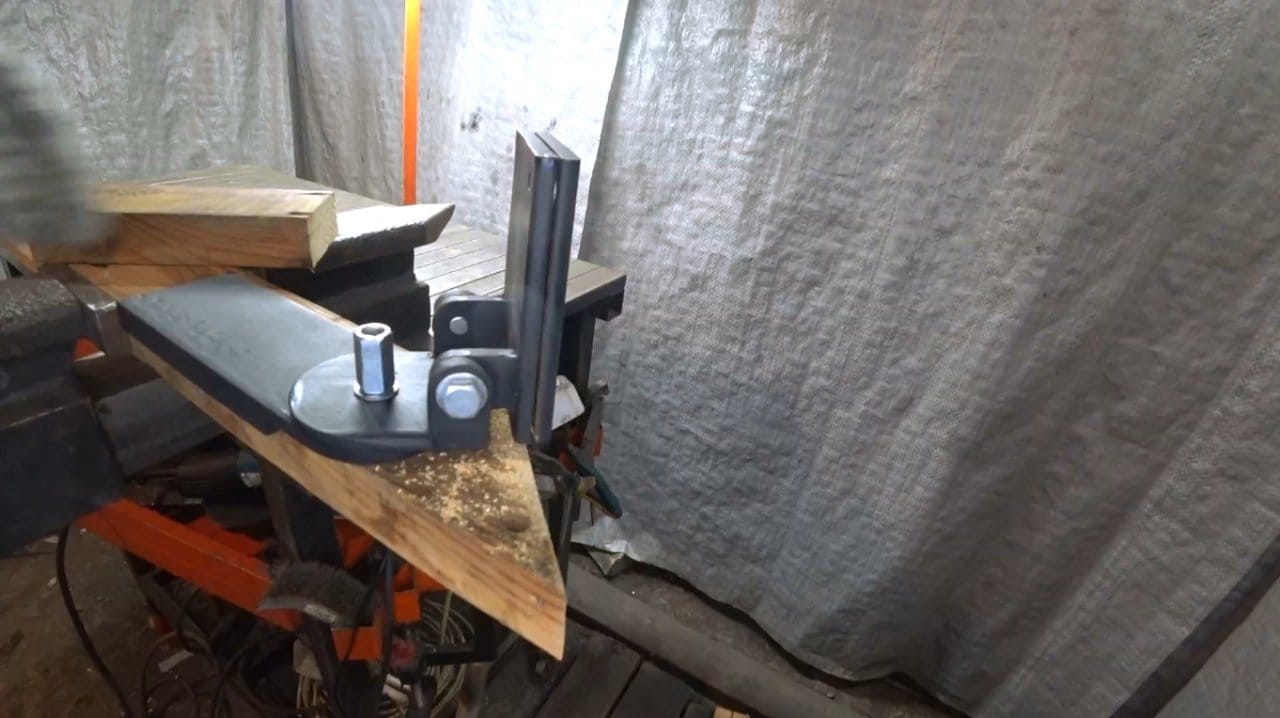 Putting the cut ends together again gives an angle of 90.
The pivot of the platform returns to its original position, and now the guide itself is tilted. 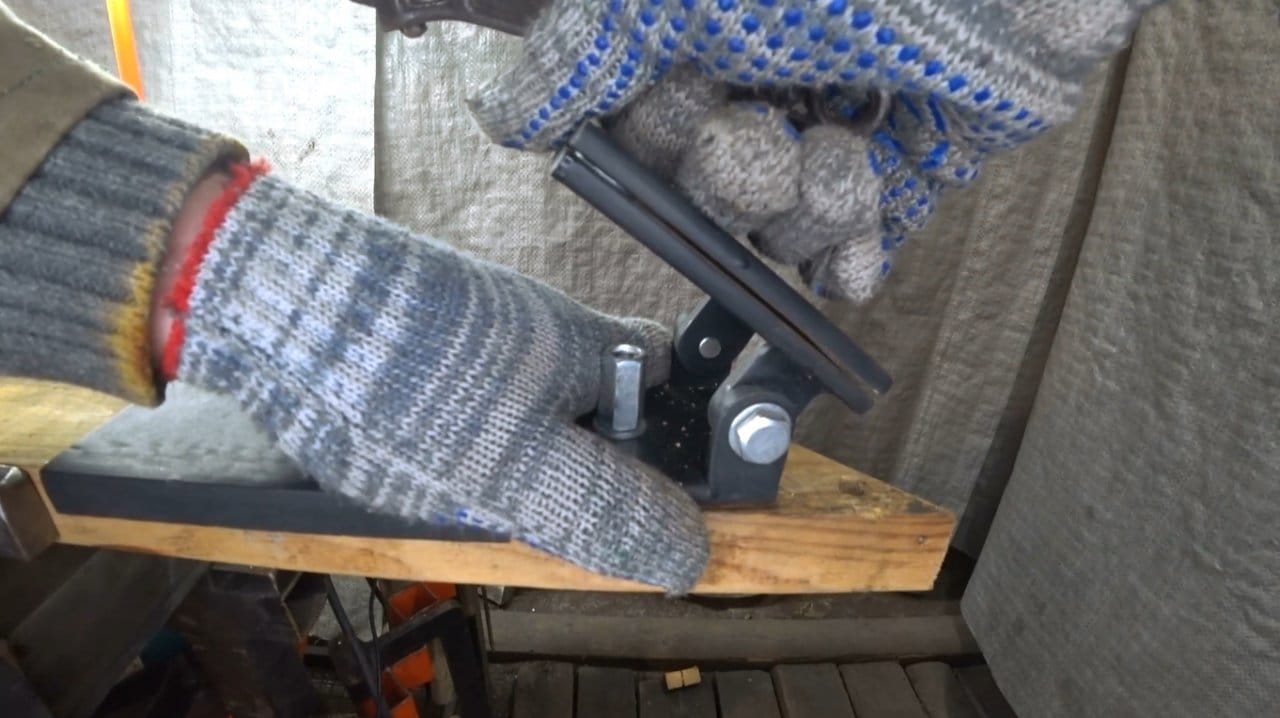 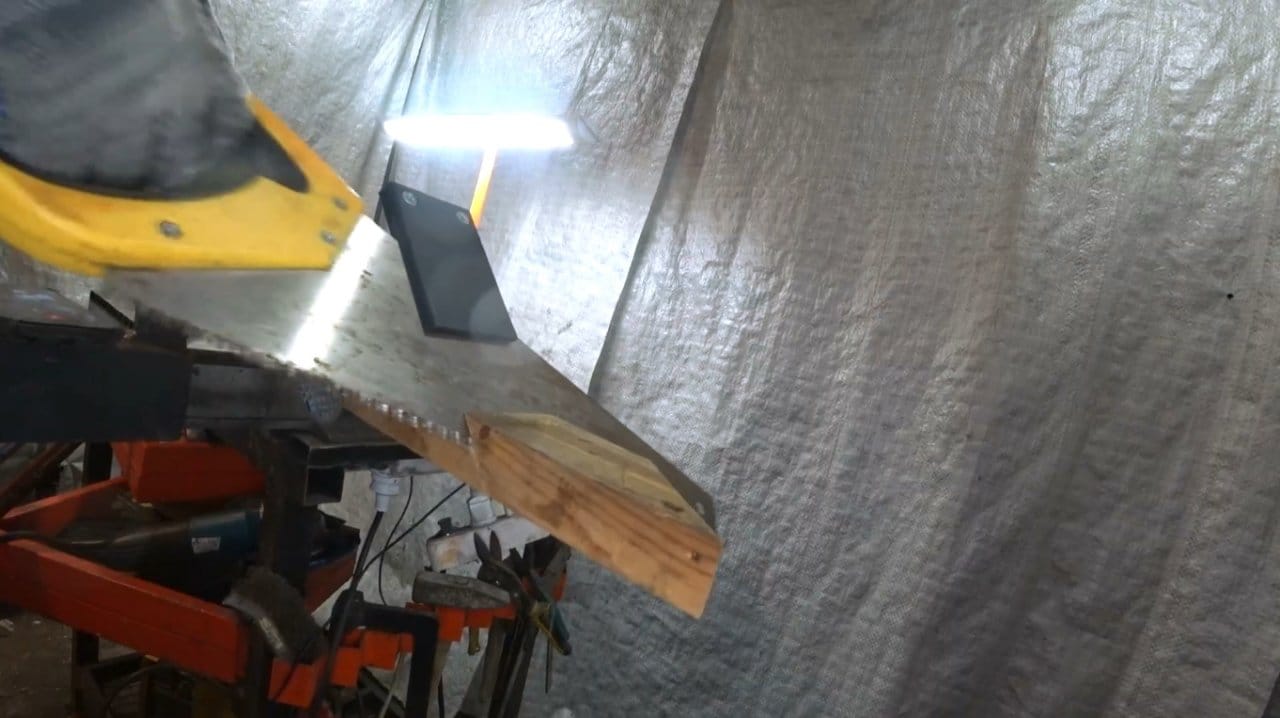 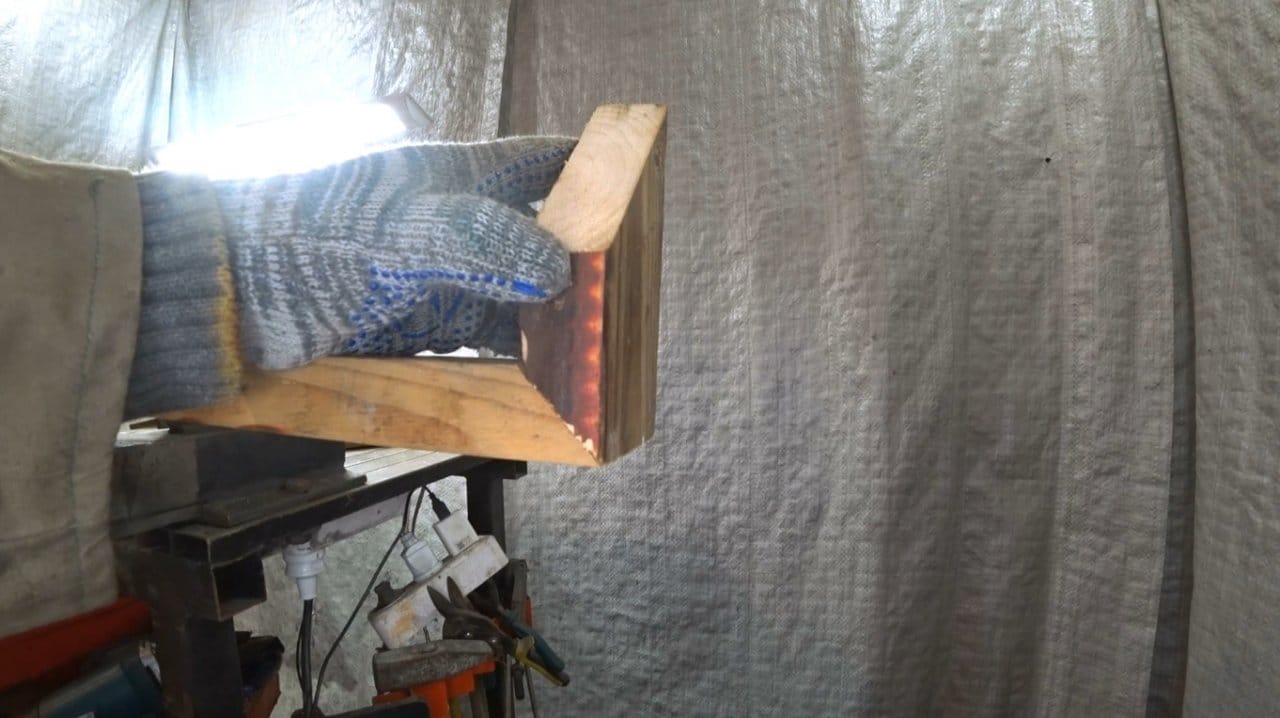 Thanks to Victor for the idea of ​​an accurate and durable miter box!
Perhaps an interesting idea to improve the design proposed by the author would be to install magnets instead of using a slotted rail. This idea was detailed in article about magnetic miter box . 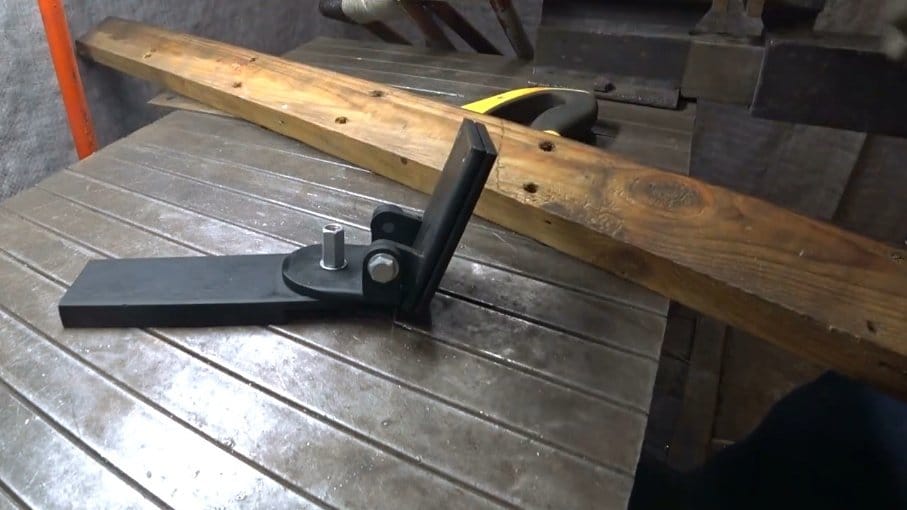 But this miter box is offered by the Chinese industry.
Everyone good mood, good health, and interesting ideas!
Subscribe to the telegram channel of the site not to miss new articles.
The author's video can be viewed here.