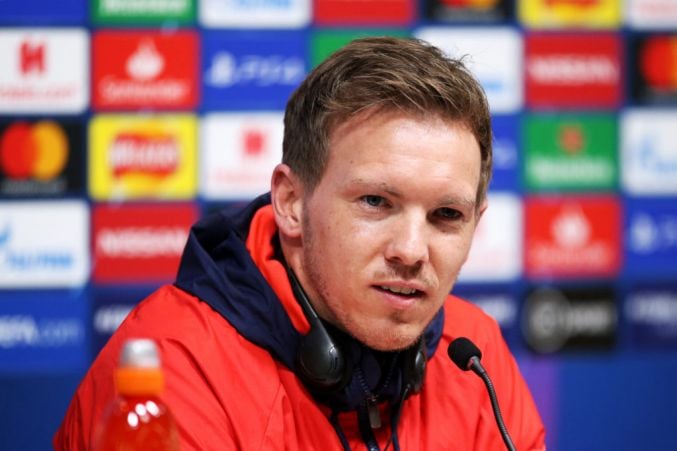 However, he believes his compatriot remains happy with the general situation at Anfield and would not be tempted by the soon-to-be-vacant Germany job after Joachim Low announced he was quitting after this summer’s European Championship.

“Frankly I don’t really care right now who will be the national coach so I don’t want to answer that,” said Nagelsmann, immediately ruling himself out of the running, ahead of the Champions League last-16 second leg tie in which his side trail 2-0 to the Reds.

“Klopp is an exceptional coach but I think Liverpool and Jurgen Klopp are content with their partnership.”

Liverpool have lost their last six matches at Anfield – so it may be an advantage their ‘home’ game is being played in Budapest due to coronavirus restrictions – and have taken 12 points from the last 42 in the Premier League.

European football offers Klopp’s side some respite but Leipzig, who have won eight of their last nine – with the first leg defeat the only blemish – will not make it easy for them.

“I feel for Liverpool and Jurgen especially when you are used to being successful and everything which comes into it with the emotions, the title,” added Nagelsmann.

“And then there is a period that is hard to come through but the players and coach are too good and they will get out of it.

“This is a difficult phase for the team but they are still a world-class team, it is one of the top world-class coaches.

“Klopp said this weekend it was his worst period as a coach but he has already mastered some crises and they still have a chance to win the match.

“There are a lot of details coming together which sometimes means you go down a little bit and you can’t win the matches.

“But we are not talking about the results of Liverpool. It is not important that Liverpool lost against Everton or Fulham.

“We have the necessary respect for them as we lost the first game and we will do everything we can not to lose the second leg.”

Here's what it all means for the table 👀#BLMatchday pic.twitter.com/zHYrfzmneX

Despite being 2-0 down, Leipzig, just two points behind reigning European champions Bayern Munich in second place in the Bundesliga, still pose a considerable threat.

They were semi-finalists last season, having beaten Atletico Madrid in the last eight, and Nagelsmann does not feel the need to create a great comebacks narrative.

“It’s not a topic at all. We don’t prepare any analytical or motivational videos because those matches don’t have any influence on our own match,” he said.

Always use the right equipment for the job.

“All the boys know crazy moments can happen, it can happen that teams make up a few goals.

“We have to take a bit of risk tomorrow. If we want to advance, we have to score three goals. Maybe it could be extra-time and penalties?

“We have to attack in order to make up those two goals without being too naive and opening the whole defence.”