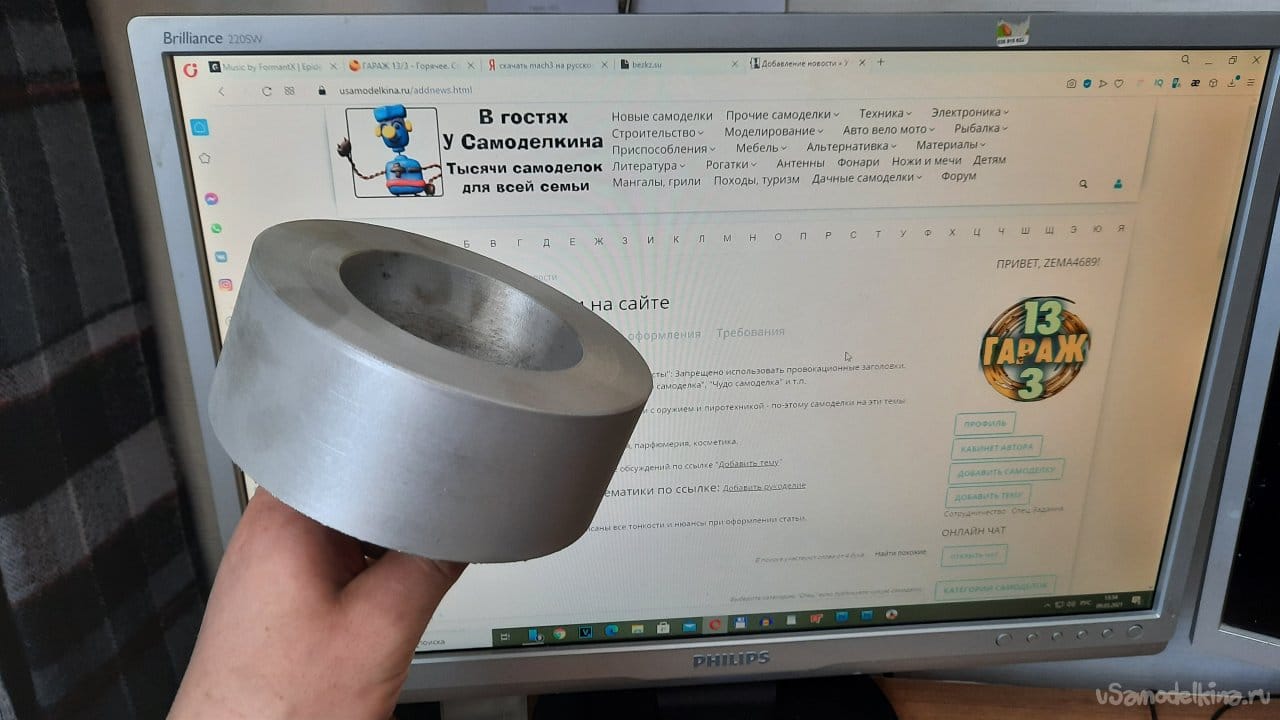 Hello everyone! The task was to make a batch of aluminum rollers for grinders or blanks for pulleys. There is a sand casting technology, but I didn't have the materials for this task. Yes, and there are some difficulties, you need to select the composition of the sand and molding takes a lot of time. You can use polystyrene as the shape of the part, then again stick it with sand. You can do wax models, but this is for more complex details. Therefore, it was decided to make a collapsible reusable form of metal.
For this, a piece of pipe was taken and after the groove, the inner diameter turned out to be 145 mm. The pipe was cut off and a landing collar was machined along the outer diameter. The bottom of the mold is made of 7mm thick sheet metal. On a lathe, it is turned as cleanly and grooves are selected for installing the outer and inner pipes. The inner tube is tapered.

This is done for easier removal from the solidified aluminum billet. A 3mm metal plug is welded on top. An M10 stud is welded in the center of the plug. A hole has been drilled in the plate. This allows the inner to be pulled against the plate and to ensure centering and tightness. The outer part of the mold was also drowned out from above with a 3 mm plate. I cut a hole in the center of the plate and welded a piece of pipe for the shank. Usually, when the pulleys are sharpened, a shank is left. A hole is drilled in it, a thread is cut and thus the pulley is fixed on the motor shaft. I drilled four holes around the perimeter in the bottom plate, and welded nuts to the outer pipe. This allows you to disassemble the shape after the metal has solidified.

Well, that's all. You can start melting aluminum. My stove was made a long time ago. Aluminum is stored in ingots. Periodically, as it accumulates, I melt it and cast it into a homemade mold. The stove runs on gas. Gas is sold through a homemade injection burner. I have all these things on my YouTube channel. After heating the furnace and obtaining molten metal, it was successfully poured into a mold. There is one nuance here. Since the form is metal and metal-consuming, it must be warmed up. Otherwise, the molten metal will immediately solidify and the casting will turn out to be of poor quality. After the metal has hardened, the mold, together with the workpiece, can be cooled in water.

Here, according to my calculations, the bottom, together with the inner part, should have separated from the casting without problems, since the inner part was machined under the cone. And I thought of squeezing out the casting itself with a press. But everything turned out exactly the opposite. Aluminum shrinks a lot when it cools. And this made it possible to remove the casting from the mold without any problems. But with the inside there were problems. It was very tightly squeezed and all my efforts to pull it out were useless. I had to drill a hole from the end, insert a bolt there and resort to using a press. I have it self-made, from a jack for 5 tons. Imagine my surprise when the press began to spit oil under load, and this infection did not even budge, despite the fact that I heated the casting. Moreover, it bent the welded plug and broke off the bolt for the tie.

In general, sadness. It was decided to weld a central hole in the bottom and cast without an inner part. This is certainly bad. There will be an overconsumption of metal and the workpiece will turn out to be heavy. You can, of course, choose the metal on the lathe, but this is the time and mountains of aluminum shavings, which then need to be collected. And melting it is also not very good. There are many oxides on it. It's like melting beer cans. There is little metal at the exit. But what to do, the video for the channel is removed and you need to get the result. In general, I cast the second blank.

The form sorted out without problems. Everything lagged behind, nothing stuck. The workpiece turned out to be of quite good quality. Having turned on the machine, the result of such an experiment almost suited me. But I was haunted by the excess consumption of aluminum. I quickly grinded a new inner boss, grinded it with a larger cone. I turned it across by 10 degrees. a decent cone came out. Since the 3mm metal cover is bent, I cut out the 7mm plates. Such a thickness with such a diameter will not bend exactly! I did all the melting and pouring operations and again to the press. And then I really got it! This boss did not want to climb out even with a heated part. They sailed. Okay, I took up the first piece. On the machine, I pierced and ripped off the inner metal part with a cutter. As a result, there are three blanks. 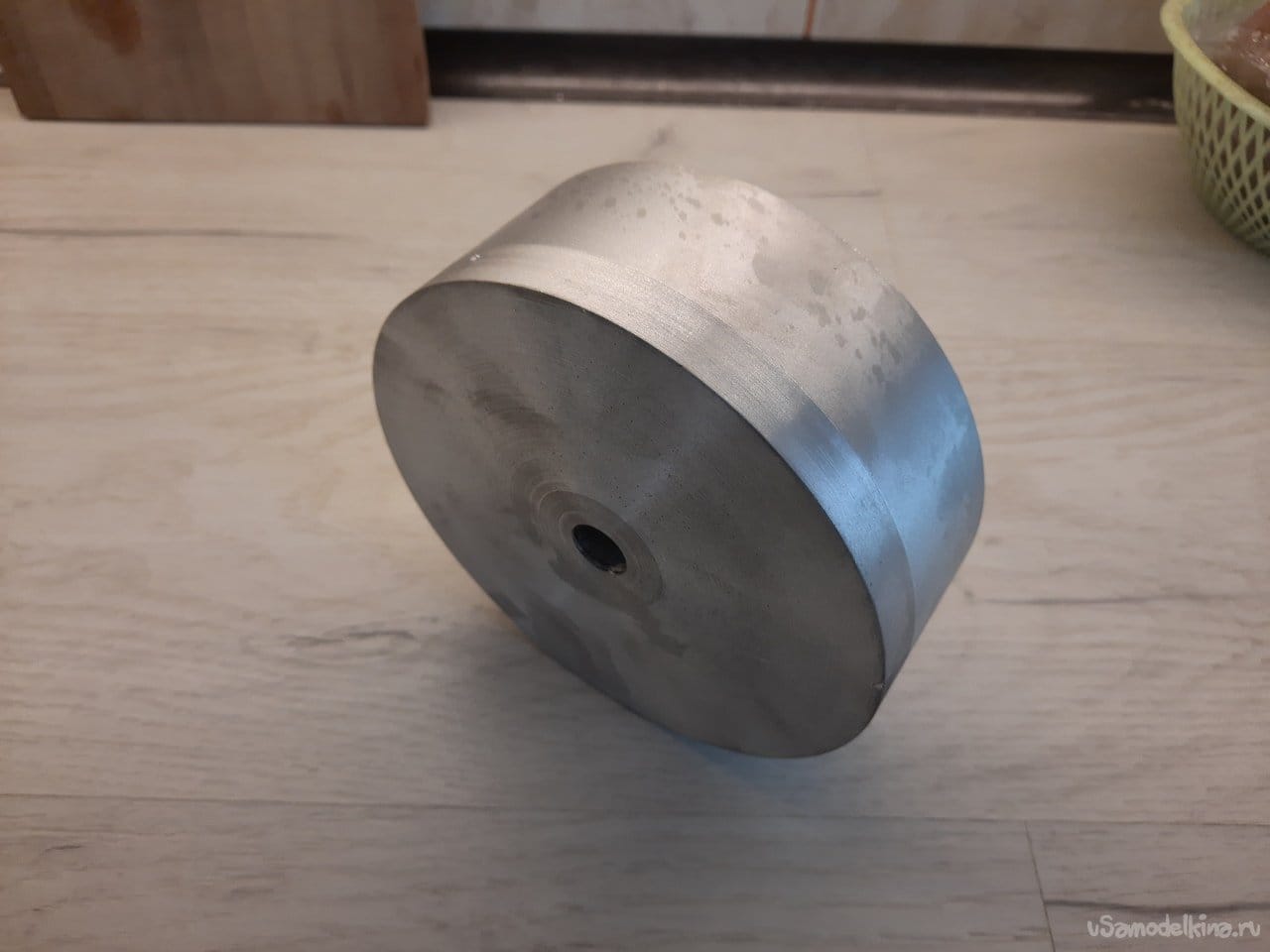 One solid and one with a recess, lighter and one with a metal inside which I will flow later. In the process, some thoughts were born about this. The inner part must be made of sand, or a metal split part must be fenced. But it must be sealed. In general, something like this. Pay attention to these things!
From materials:
Furnace, gas, burner, non-ferrous metal for the workpiece and black for the mold. Bulgarian , welding, hand tools, bolts nuts and lathe neighbor, or better your !!!
More details can be seen in the video below:
Until next time, bye!