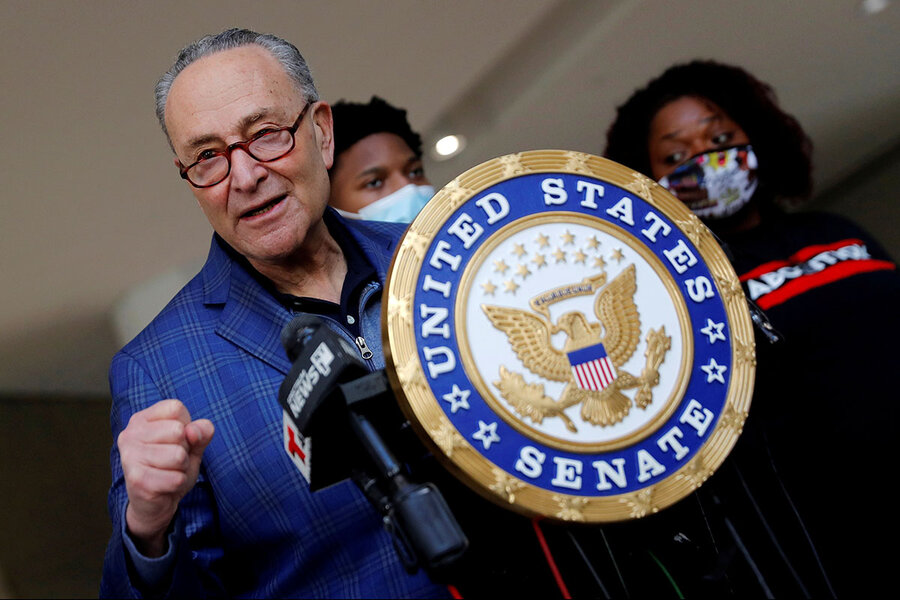 As President Joe Biden’s $1.9 trillion American Rescue Plan speeds toward final passage this week, Democrats are hailing the bill as one of the most sweeping pieces of progressive legislation in decades – one that they say will lift millions of Americans, particularly children, out of poverty, and could herald a deeper and more long-term shift in public attitudes toward government assistance.

The bill allocates $92 billion – or about 5% of the overall price tag – toward public health initiatives, including testing, tracing, and vaccination, as the Monitor detailed last week. Nearly half of the bill’s cost goes toward the third and largest round of stimulus payments to date, as well as expanding many existing government benefits – including the child tax credit, the earned income tax credit, Medicaid coverage, and other subsidized health insurance. For an average family of four making less than $150,000 annually, that could amount to more than $10,000 in tax-free benefits, some of which will be paid out monthly. Lower-income families could receive double that.

“It’s one of the most important and transformational bills to come out of the Congress in the last quarter century,” says Rep. Hakeem Jeffries of New York, who chairs the House Democratic Caucus. He says he looks forward to supporting the bill, which “meets the moment that we’re in right now.”

The $1.9 trillion bill temporarily expands many government benefits for lower-income Americans. Some predict these could become permanent, reflecting a broader shift in attitudes toward public assistance.

Some are characterizing the legislation as the largest expansion of government welfare benefits since Lyndon B. Johnson or even Franklin Roosevelt’s New Deal. Although its key steps would need to be renewed in order to endure, the bill arguably moves the country closer to a form of universal basic income. That’s a concept that gained attention in the 2020 primaries, when Democratic presidential candidate Andrew Yang promoted it as the most effective way to help struggling Americans, circumventing government inefficiency by allowing individuals to solve their needs in the best way they see fit, which in turn would funnel money back into the economy.

“It is unequivocally a landmark legislation in the sense of putting the biggest dent in U.S. poverty rates and child poverty in particular, really probably since the Great Society and maybe even since the New Deal era,” says Samuel Hammond, director of poverty and welfare policy at the Niskanen Center, a think tank in Washington, D.C. In particular, he highlights the expanded child tax credit. “It’s really hard to overstate the anti-poverty impact of just that one piece in particular.”

Supporters argue this outpouring of government aid is exactly what’s needed as Americans grapple with the twin challenges of a pandemic and an economic downturn caused by local, state, and federal shutdowns, which saw unemployment rise to nearly 15%.

“A blessing to many people who have been suffering”

“Some of us have been blessed. And as a result of being blessed, I sometimes think we don’t realize how other people are suffering,” says Rep. Al Greene of Texas, an assistant Democratic whip and member of the Financial Services Committee whose constituents are also still grappling with the fallout of last month’s winter storm. “I’ve been blessed for one reason: to be a blessing to others. And I think that this bill is going to be a blessing to many people who have been suffering.”

Having passed the Senate on a 50-49 party-line vote Saturday, the bill heads back to the House, which is expected to send it on to President Biden for his signature this week. The Senate version stripped out the House’s $15-an-hour minimum wage provision, and also pared back weekly federal unemployment insurance payments from $400 to $300 per week, while phasing out stimulus payments at a $160,000 annual household income rather than $200,000.

Still, many Republicans are calling the bill excessively large, and accusing Democrats of using the pandemic as political cover for advancing a liberal wish list at a time when the federal deficit just hit an all-time high of $3.1 trillion.

“I do think there are citizens in the United States who still need help, without question,” says Rep. Byron Donalds, a Florida Republican and House Budget Committee member whose mother ate sardines and made her own clothes to put him through private school. “But we didn’t start there and then it got out of hand. It started out of hand. I think it’s important we understand that. It started way out of hand.”

Critics also question why, when there are now growing signs of recovery, this bill is almost as large as the $2.2 trillion CARES Act passed at the beginning of the pandemic. Approximately $1 trillion in Congress-approved COVID-19 relief has yet to be disbursed. Meanwhile, unemployment has fallen to 6.2% as many states are reopening their economies, students are heading back to school, and new cases have declined rapidly.

“We should be opening up America and celebrating the end of this terrible scourge. Instead we’re battening down with irrational fear,” said GOP Sen. Rand Paul of Kentucky prior to the Senate’s passage of the bill, while expressing concern about its impact on the national debt after the U.S. had already borrowed $4 trillion over the past year. “[This] is a power grab in the sense that government will grow larger … and as government grows huge, it’s hard to get government smaller ever. Every time the government has a huge explosion in growth, we never are able to pare it back.”

The bill’s four largest welfare expansions are all temporary unless renewed. Those include the expansions of the child tax credit, the Affordable Care Act subsidies for health insurance, the child care tax credit, and the earned income tax credit (EITC). Experts say the expanded benefit most likely to be renewed is the child tax credit, which will increase from $2,000 to $3,000, with an additional $600 for those under 6 years old, and made fully refundable. That means that for those whose tax bill is lower than the amount of the benefit, they will receive not just a discount on their taxes but a cash payout.

House Appropriations Committee Chair Rosa DeLauro of Connecticut said in a statement that the changes to the child tax credit, which were modeled on her previously proposed American Family Act, would cut child poverty nearly in half.

“This is a historic day, one that I have been working toward since 2003,” she said after the Senate’s passage of the bill on Saturday. “By expanding and improving the child tax credit, this legislation forever changes the way that our nation supports both middle class families and children in poverty.”

Republicans have supported extending greater government support to children, but some say it should be tied to work requirements to discourage parents from relying on government funding in lieu of employment.

Some analysts say Democrats are overselling the likely impact of the bill. While it opens the door to expanding America’s welfare state, it’s not on a par with the creation of Social Security, Medicare, or the Affordable Care Act, says Marc Goldwein, senior vice president and senior policy director at the Committee for a Responsible Federal Budget.

“I don’t think that the comparisons to the New Deal or the Great Society are apt. The main thing this bill does is COVID relief,” says Mr. Goldwein. He, along with others, argues it provides more aid overall than is necessary and is not as well targeted as it could have been.

The risks of too much versus too little

“This is something the country can’t afford. You’ve just got like a trillion dollars too much here,” says Desmond Lachman, resident fellow and economist at the American Enterprise Institute. He sees the bill as politically motivated and worries it could cause the economy to overheat. “If they were just interested in the economics, they would never have done something this big.”

Republicans have come under fire for not sounding alarm bells earlier on, with much of conservative media more focused in recent days on issues like Dr. Seuss and cancel culture. Still, GOP Rep. Tom Cole of Oklahoma notes that every single Republican voted against the bill. “It’s not like pounding on the table and yelling louder would have made much difference,” he says.

Yet the bill’s price tag and accelerated passage through Congress are indicative of how much the goal posts have moved since the Obama era, when the president faced significant pushback even from centrist Democrats for an $800 billion package during the Great Recession. As the GOP has taken a more populist turn, even Republicans have warmed up to the idea of sending families cash, with President Donald Trump pushing for $2,000 stimulus checks in December just before he left office. And many Democrats see their inability to get more relief to taxpayers and reinvigorate the economy in 2009 as one reason they lost big in the 2010 midterms.

“They feel like they made a mistake during the Great Recession by doing too little,” says Mr. Goldwein. This time, he adds, “they would rather borrow a trillion too much, it seems like, than 100 billion too little.”