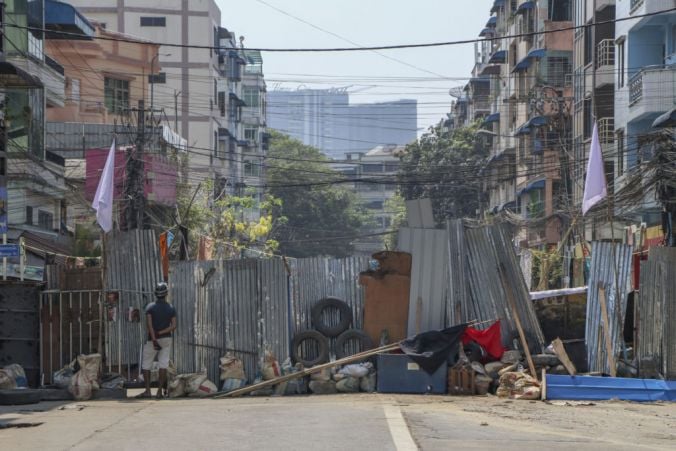 Myanmar security forces raided a neighbourhood in the country’s largest city that is home to state railway workers who have gone on strike to protest against last month’s military coup.

Police sealed off the Mingalar Taung Nyunt neighbourhood in Yangon where the Ma Hlwa Kone railway station and housing for railway workers are located.

Photos and video on social media showed officers blocking streets and what was said to be people escaping.

At least three arrests were reported but it was not immediately possible to independently confirm that.

The statement said the strike would be part of a broader effort for “the full, extended shutdown of the Myanmar economy”.

Myanmar has been affected by protests and other acts of civil disobedience since the February 1 coup that toppled elected leader Aung San Suu Kyi’s government just as it was to start its second term.

The coup reversed years of slow progress toward democracy in the Southeast Asian nation after five decades of military rule.

Security forces have responded with mass arrests and at times lethal force.

At least 60 protesters have been killed since the military takeover, according to the independent Assistance Association for Political Prisoners.

Authorities have also moved to shut down independent reporting on the situation, both through arrests of journalists the closure of media outlets.

Despite the increasingly violent tactics of security forces, protests continued on Wednesday in cities and towns across the country, including Yangon, Mandalay, Monywa, Dawei and Myitkyina.

State railway workers were among the earliest organised supporters of the protest movement and their strike began soon after the coup.

Police last month made an effort at intimidating railway workers in Mandalay, the country’s second-biggest city, by roaming through their housing area one night, shouting and randomly firing guns.

The junta now in control of the country, formally called the State Administration Council, indirectly acknowledged the effectiveness of the rail strike.

The state-run Global New Light of Myanmar newspaper in a Tuesday report on a junta meeting, cited officials as saying that rail transport between Yangon-Mandalay would resume “in the near future”.

It also acknowledged that the banking sector has been affected by the protest movement.

The dawn raid on the railway workers followed another night of intimidation by police marching through residential areas in several cities after an 8pm curfew, firing guns and stun grenades, and staging selective raids to arrest people.

There were more reports Tuesday of protesters dying in custody after being arrested.

The latest was a school principal who died of unknown causes after being taken into custody by security forces, according to media reports and an activist who knew him.

Witnesses said his body had wounds consistent with torture, according to New York-based Human Rights Watch.

According to the Assistance Association for Political Prisoners, more than 1,930 people have been arrested in connection with the coup.

Dozens of journalists have been arrested, including Thein Zaw of The Associated Press, who has been charged under a public order law that carries a penalty of up to three years in prison.

Authorities continued their assault on the media on Tuesday, raiding the offices of Kamayut Media and detaining its co-founder and editor-in-chief.

The military also raided the offices of Mizzima, an online news service.

No one was arrested in the latter raid, though equipment was vandalised and property was taken away.

All five had been offering extensive coverage of the protests.