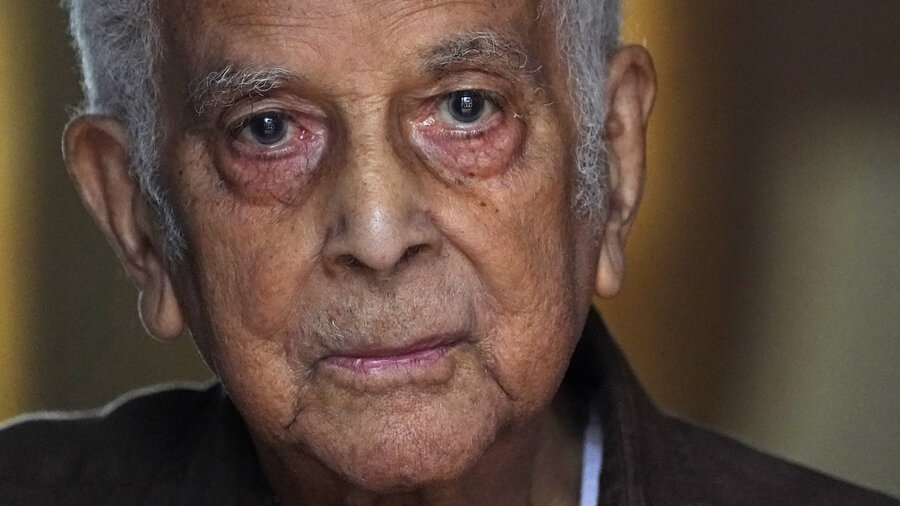 Professor Edwin Driver arrived in Amherst in 1948 as one of the first Black teachers hired at a flagship state university in the country.

But the 23-year-old sociology instructor at what would become the University of Massachusetts Amherst says he was denied pay raises for decades, despite being one of the school’s most published professors.

Dr. Driver and his wife, Aloo Jhabvala Driver, who was from India, also encountered roadblocks trying to buy a house in the mostly white college town. Their three children faced racism from neighbors and school officials alike.

“There’s a lot of people in Amherst that have not gotten a proper share of things,” the professor emeritus said at his home in nearby South Hadley recently. “I ended up being the lowest paid professor in the department, but also its most productive.”

Dr. Driver and other current and former Black residents may one day be compensated for their hardships.

Amherst, some 90 miles from Boston, is among hundreds of communities and organizations across the country seeking to provide reparations to Black people. They range from the state of California to cities like Providence, Rhode Island, religious denominations like the Episcopal Church, and prominent colleges like Georgetown University in Washington.

The efforts, some of which have been underway for years, have gained momentum in the wake of the Minneapolis police killing of George Floyd last May. President Joe Biden has even expressed support for creating a federal commission to study Black reparations, a proposal that’s languished for decades in Congress.

Kamm Howard, co-chair of the National Coalition of Blacks for Reparations in America, said the wide-ranging approaches could provide models for a national reparations program. He’s also not surprised Amherst, long a liberal bastion, is tackling the issue.

“It validates that every community in America, no matter the size, is a microcosm of the broader problem,” Mr. Howard said. “You’re going to find these things, if you dig.”

Amherst’s effort started with a petition launched last summer by two white yoga instructors, which led to a town council-approved resolution in December committing Amherst to a “path of remedy” for Black residents “injured or harmed by discrimination and racial injustice.”

Michele Miller and Matthew Andrews, who led the petition effort as co-founders of the group Reparations for Amherst, said they wanted to provide something “tangible and healing” for local Black families amid nationwide protests and turmoil.

They argue that Amherst, a college town of nearly 38,000 residents, didn’t become more than 75% white and just 5% Black by accident.

For decades, restrictive housing policies prevented Black families from purchasing homes in desirable parts of town, according to Ms. Miller and Mr. Andrews’ research. Black people were also shut out of jobs and educational opportunities at UMass Amherst, one of the state’s largest and most prominent institutions.

As a result, the median income for Amherst’s white families is more than two times that of Black families, and more than half its Black population lives below the poverty line.

“Amherst likes to think of itself as progressive, but that idealism isn’t always borne out,” Mr. Andrews said. “The economic and social disparities are clear.”

But the next step needs to come from the Black community, she said. Ms. Anderson and other Black residents are taking part in virtual conversations this spring to talk about what reparations should look like.

A former school committee member, Ms. Anderson would like to see the process address a broader, systemic need, such as racial disparities in the public schools. Black teachers, she said, have complained of racist harassment and hostile work environments for years.

“Reparations can be more than a check,” Ms. Anderson said.

Amilcar Shabazz, a professor of Africana studies at UMass, said he’d like to see better recognition of the local Black community in town landmarks and monuments. Celebrated authors Chinua Achebe and James Baldwin both taught at UMass but aren’t recognized anywhere in town, he noted.

“We have a lot to talk about,” he said. “I wonder if the town is ready for this. Can these scars be healed? Can you put a price tag on trauma?”

Ms. Miller and Mr. Andrews, meanwhile, have looked to Evanston, Illinois, as a potential model, inviting a leading alderman from that community to speak with Amherst’s Black residents next month.

The Chicago suburb’s reparations fund, established in 2019, is focused on housing inequities, using a 3% tax on recreational marijuana sales to help Black residents with homeownership, including mortgage assistance and funding for home improvements.

Dr. Driver believes the town’s higher education institutions – UMass Amherst, Amherst College, and Hampshire College – should be part of the solution because of the role they’ve played in the town’s racial divide. The three institutions expressed support for the town’s effort in separate statements to The Associated Press, but stopped short of committing any resources.

When he was hired, Dr. Driver was the first person of color to be employed in any capacity at university. By the late 1960s, UMass Amherst had just six Black faculty members and 36 Black students in a student body of nearly 17,000, according to university historical records.

Dr. Driver said he’d personally like to be compensated for years of being underpaid.

He earned tenure in 1954, but remained the lowest paid professor in his department until the 1970s, when a new department head sought to rectify the imbalance.

“We are in a position of having to admit that Driver is an extremely impressive professional with an outstanding scholarly record whom we have not sufficiently recognized locally,” wrote Thomas Wilkinson to other school officials in 1970.

Dr. Driver continued to lead a distinguished career. The graduate of Temple University and the University of Pennsylvania has written numerous books and is currently at work on another. He served as a visiting professor at UCLA and other top colleges. He even had stints as a United Nations advisor in Iran and consulted and taught in France, India, and elsewhere. Throughout, Dr. Driver remained firmly rooted at UMass, where he retired in 1987.

“If reparations could make up the lost salary, I would appreciate it,” Dr. Driver said. “I would enjoy it. I would celebrate it, but I don’t think that’s going to ever happen.”

He hopes UMass can at least acknowledge the contributions pioneering Black professors made.

Dr. Driver already has a spot in mind: his first office on campus, which was tucked in the basement by the furnace, in a place where the janitor didn’t even bother to empty the trash bins.

“If they would rename that after me,” Dr. Driver said. “That would be the ideal reparation.”