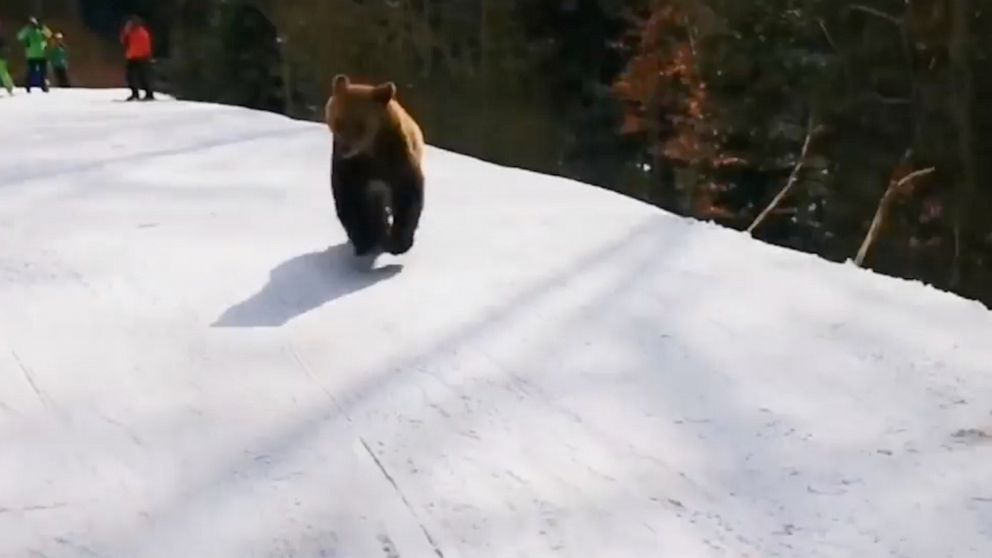 For the second time this year, skiers at the same Romanian resort have faced down a bear on the slopes and lived to share the video.

The most recent narrow escape at the Predeal Ski Resort in the Transylvanian mountains of Romania took place on Tuesday.

Ski instructor Adrian Stoica was about to begin teaching a class when he captured the video. The instructor said he wasn’t scared to return to the same ski run where a bear charged after people on the slopes in January until, that is, another young bear suddenly came out of the woods.

“I was just checking the ski slope condition before I take my students for a ski lesson,” the 50-year-old Stoica told ABC News.

“As I was skiing down the mountain, a bear suddenly appeared on the slope and a group of at least 15 skiers was trapped on the spot,” he said. “I told them to try to chase the bear away by making noise and shouting. It did not work.”

By then, Stoica was recording the episode as he moved downslope of the trapped skiers.

“I slowly waved my arms, slowly moved out of the group and made the bear come after me as he was really close to the group,” he said. “I was just hoping that the bear would get tired and would go back to the forest.”

As he tried to escape the bear, he could see trouble ahead: other skiers farther down the slope.

“I had to warn them carefully while both me and the bear came whizzing past them,” he joked.

Stoica said the most important thing was to “stay calm — bears feel the fear.”

Looking back on his own video adventure, Stoica told ABC News, “It was a horror, but also an experience of a lifetime — alone with a wild animal in the wilderness.”

The combination of climate change waking bears from hibernation earlier and the expansion of mountain homes, resorts and ski and hiking trails is likely bringing more people into bear country. The young bear from this week’s incident — like the one in January — paid for his internet stardom with banishment from his Transylvania home.

Ion Zaharia, a spokesperson for the Brasov County Police Department, told ABC News the bear in Tuesday’s video was the brother of the bear seen on the slopes in January. And there is at least one more bear in these woods.

“Their mother, she was not seen this year at all,” Zaharia said.