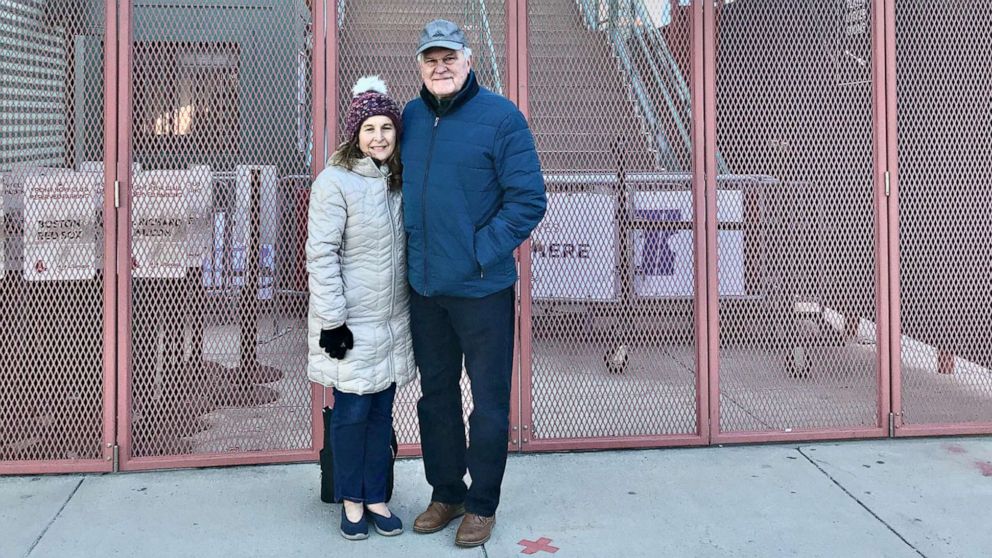 Fenway Park, home of the Boston Red Sox, holds a special place in the hearts of Donna and Thomas Wall. They met at a game in 1967 and got engaged there in 1971. Now, they received their COVID-19 vaccines together at the park.

Thomas Wall was working at Fenway Park as an usher in 1967 when he met his future wife, who was there watching a game. They were both 16, Donna Wall told ABC News.

They dated while attending college in the Boston area. In August 1971, the couple went to a Red Sox game, and Thomas Wall surprised her with a proposal, putting the ring in a popcorn box, Donna Wall said.

“My mom has always been a huge sports fan, so she used to go to a lot of games,” said their daughter, Nicole Maynard, 39. “We always teased that my mom was looking for a ball player but she got an usher.”

On their 35th wedding anniversary, Thomas Wall surprised his wife with a party at — where else? — Fenway Park.

“That was fun,” Donna Wall said.

When the COVID-19 pandemic began, Thomas Wall retired, and they hunkered down.

Donna Wall helps care for her ailing 93-year-old father, but as a former kindergarten teacher, she also volunteered to help her grandson with Zoom kindergarten. Maynard and her husband agreed to stop outside contact so they could safely send their young son to his grandmother’s house for virtual school.

No one in the immediate family has had COVID-19, Donna Wall said.

“We are very fortunate,” Donna Wall said. “Not everybody has this kind of a COVID story.”

She attributed it to the family strictly following COVID-19 rules.

“Only to the store to do necessary stuff. This summer, I had someone do my shopping for me,” she said.

After a long year of isolation, on Monday, Donna and Thomas Wall returned to Fenway Park for their second vaccine dose.

“It’s where it all started,” Maynard said. “I’m just so happy and relieved for them. They see the light at the end of the tunnel.”

“I know it’s been hard for my mom not to see their other grandkids, just hug them,” she said.

Donna Wall added, “This is not the end. We still have to really be careful.”