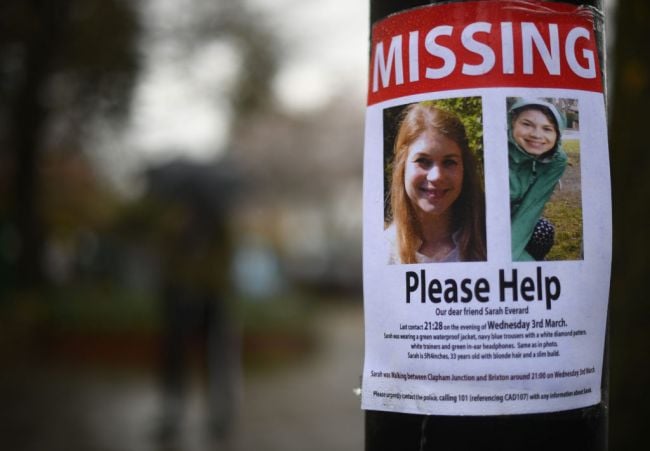 A missing sign in Clapham, south London, during the continuing search for Sarah Everard who has been missing for a week. Photo: PA Wire/PA Images

A police officer held over the disappearance of a woman in London has been arrested on suspicion of murder.

On Wednesday, the Metropolitan Police said the man, who is in his 40s and is part of the Parliamentary and Diplomatic Protection Command, was being questioned over suspected kidnap and murder.

Two sites in Kent were being searched on Wednesday as the hunt for Sarah Everard continued – one of which is believed to be the suspect’s home.

Late on Tuesday, the police said a serving officer from the force had been arrested as part of the investigation, but in an unusual step would not reveal what he had been detained for.

On Wednesday, the force said he had been initially arrested on suspicion of kidnap, and later murder. He is also being questioned about a separate allegation of indecent exposure.

The police searches in Kent saw a tent erected at the front of a house in Freemens Way in Deal, where multiple cars were taken away by investigators. Later, a metal fence was put up surrounding the front garden and driveway.

A neighbour in the road said a police officer lives at the address with his “chatty” wife and two children.

She said: “They just seemed like a normal, regular family, there was nothing strange about them at all.”

She added that police were digging up the garden.

Matt Mullan (29) who also lives nearby, told the PA news agency: “Last night there were police cars outside all night.

“I thought this is a bit strange, not normal for round here.

“It was about 8-9pm there was heavy traffic out there and there have been police cars outside all morning.

“It’s very surprising, definitely not what you expect to see.”

Another said: “You don’t expect it to be on your doorstep, really.

“You see this sort of thing every day on the TV and the news but you don’t expect it.”

The land near Ashford is a disused outdoor activity and golfing centre near the village of Great Chart.

His official spokesman told journalists at a Westminster briefing: “As investigations are ongoing on this case I can’t comment.

“But the prime minister’s thoughts are with Sarah and her friends and family.”

The arrested officer, who was not on duty at the time of Ms Everard’s disappearance, was responsible for uniformed patrolling of diplomatic premises.

Speaking at Scotland Yard on Wednesday morning, Assistant Commissioner Nick Ephgrave said: “The fact that the man who has been arrested is a serving Metropolitan Police officer is both shocking and deeply disturbing.”

He told reporters that detectives are working “at all speed” to find out what has happened to Ms Everard, and repeated appeals for members of the public to come forward with information.

Turning to the 33-year-old’s family, who along with her friends have issued desperate appeals for help via social media, he said: “As a father myself, of four young women, I can only imagine the anguish that Sarah’s family are feeling at this very very difficult time.”

Ms Everard is thought to have walked through Clapham Common towards her house in Brixton – a journey which should have taken around 50 minutes.

She was last captured on a doorbell camera walking along Poynders Road towards Tulse Hill at around 9.30pm on March 3rd.