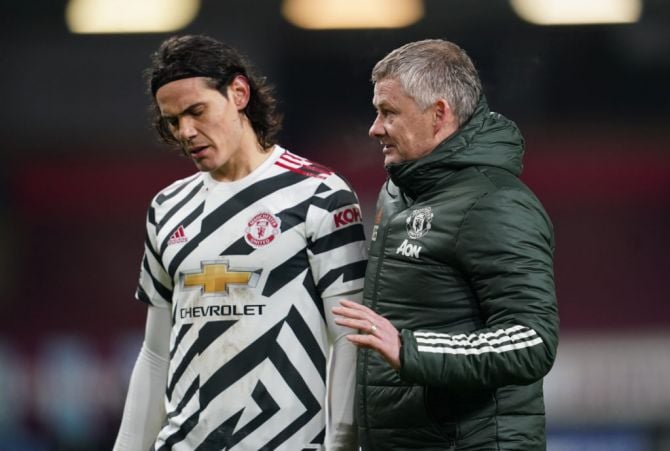 After leaving Paris St Germain as their all-time top scorer, the 34-year-old free agent moved to Old Trafford in October and signed a deal until the end of the season with the option of a further year. © PA Wire/PA Images

Ole Gunnar Solskjaer still hopes to convince Edinson Cavani to extend his Manchester United stay despite the striker’s father suggesting he is ready to quit the club this summer.

After leaving Paris St Germain as their all-time top scorer, the 34-year-old free agent moved to Old Trafford in October and signed a deal until the end of the season with the option of a further year.

Cavani has scored seven goals in 25 appearances to date and Solskjaer has made no secret about his desire to keep him at the club next season, although the player’s father has indicated that is unlikely.

Luis Cavani reportedly said there was a 60 per cent chance that his son would return to South America as he “does not feel comfortable where he is”, mentioning Boca Juniors as a possible destination.

The Uruguay international subsequently posted a photo on Instagram of him playing for the club with the caption “proud to wear this shirt” – a jersey Solskjaer hopes he will don for a while to come.

“Well, Edinson’s fully focused on being available for us and working really hard to get fit,” the United boss said.

“From my bad Portuguese and his better English, he’s very proud to play for Man United. He’s always going to give his best as long as (he is here).

“If it’s beyond this season as well, a decision hasn’t been made. As we’ve said, he’s made a great contribution so far.

“We’re just working on getting him back on the pitch and fit – and we’ll convince him when the weather in Manchester improves!”

The PA news agency understands that the one-year extension clause in Cavani’s deal has to be agreed by both parties before it can be triggered.

Injuries have kept him out at times this season, as did a three-match Football Association ban for using a racial term in a social media post – what Cavani said was an inadvertent mistake that he immediately apologised for.

“I can’t comment on what has been said,” Solskjaer said. “I can only say that we’re very pleased with Edinson when he’s here.

“He’s working really hard to be available. Every day, day in, day out, he’s proving his personality, his professionality.

“Even in his broken English, he’s really helping the young kids as we wanted him to. We knew he wasn’t going to be able to play every single game, of course, because he’d been out of football for so long now.

“Now let’s make sure he plays as much football as possible until the end of the season, scores as many goals as he can, helps the young players, the strikers, the forwards, even the rest of the group with his mentality.

“And then he will make his decision.

“He knows that we’re very fond of what he’s given to the club, even though he’s probably played less games than he wanted to.”

Cavani is set to miss another United match on Thursday, when AC Milan arrive at Old Trafford for a mouth-watering Europa League last-16 clash.