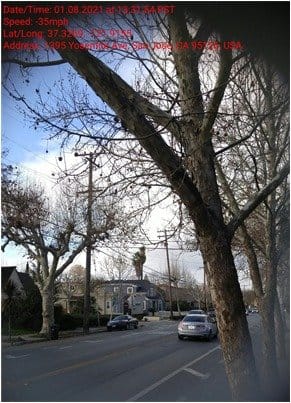 There is such an interesting computer game “How to get a neighbor”. In this game, the neighbor needs to do all sorts of dirty tricks: pour glue into a tube of toothpaste, file the leg of a chair, etc. The author of this device with the speaking nickname ops_radar decided to go further and “merge” all neighbors who drive with speeding past his house to the police.
And to implement his idea, he had to assemble a radar.
Tools and materials: -Android-Radar Gun application;
-Android phone or tablet with USB-OTG support;
-USB-OTG cable;
-Micro USB cable;
-OPS243-A radar sensor; -Battery 30,000 mAh; -Mounting box;
-Double-sided tape;
Step one: download the application
Download the Radar application to your smartphone or tablet. The app is free. It asks to use the device's camera and location. The location is added to the information the application overlays on the images. The app will place on the photo, date, time, speed and location, if available, as part of the captured image. 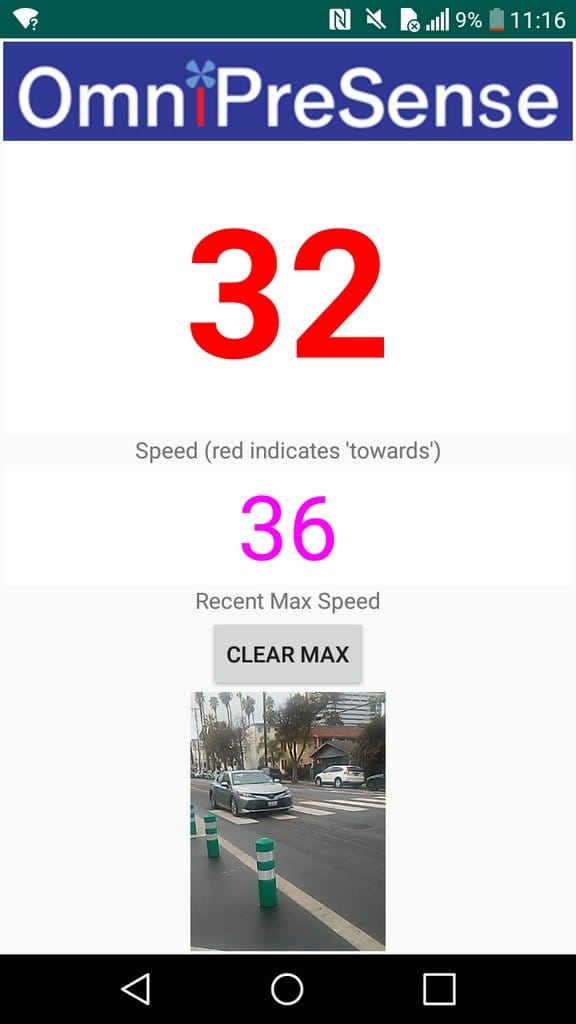 Step two: placing the parts in the enclosure 7383
Now you need to place the parts in the box and see how they are best positioned.
The radar sensor needs to “see” the road, so it should be facing the front of the enclosure (top cover) .
The camera of the phone should also be looking at the road, and it should be placed in the top cover. The phone should be oriented as if you would normally hold it for display so that the overlay of time, date, speed and location information is positioned correctly. 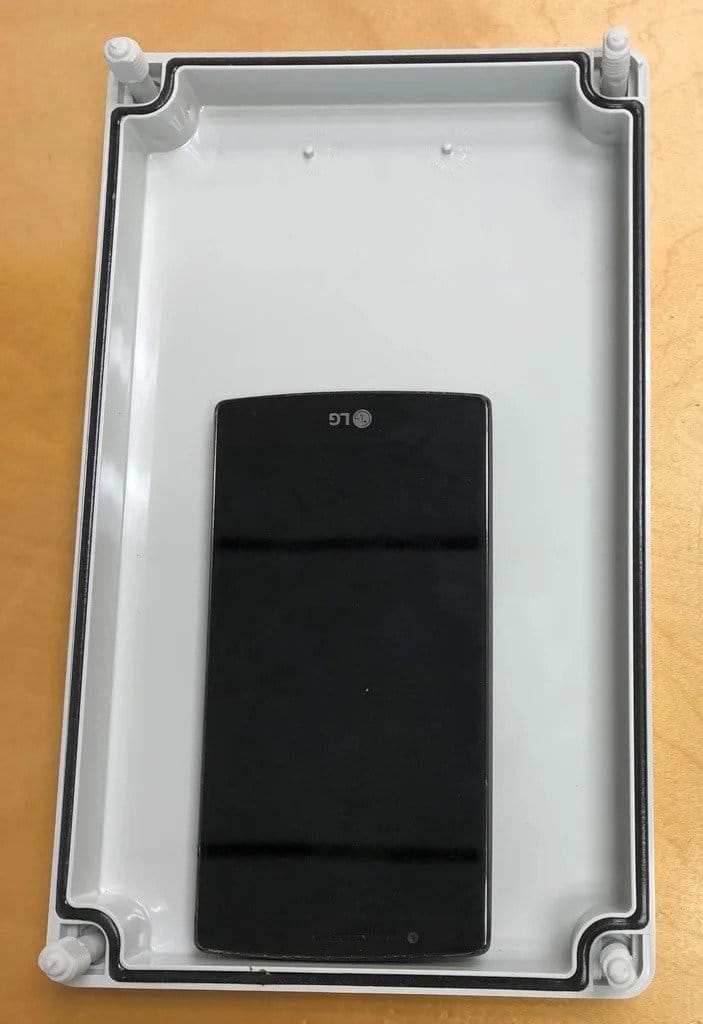 Step Three: Bracket
To properly position the radar sensor, the wizard design the mount and 3D printed it. When installed, it will hold the radar sensor in place.
The system will be installed at a height of about 2.5 – 3 meters, so that it is above parked cars and does not take pictures of passers-by walking on the sidewalk.
When installing the installation, make sure that the sensor is installed so that it looks down to the street, and not up into the sky.
Below you can download the file for the bracket printing.
6×10 Mounting to the case 10Deg_210111.stl 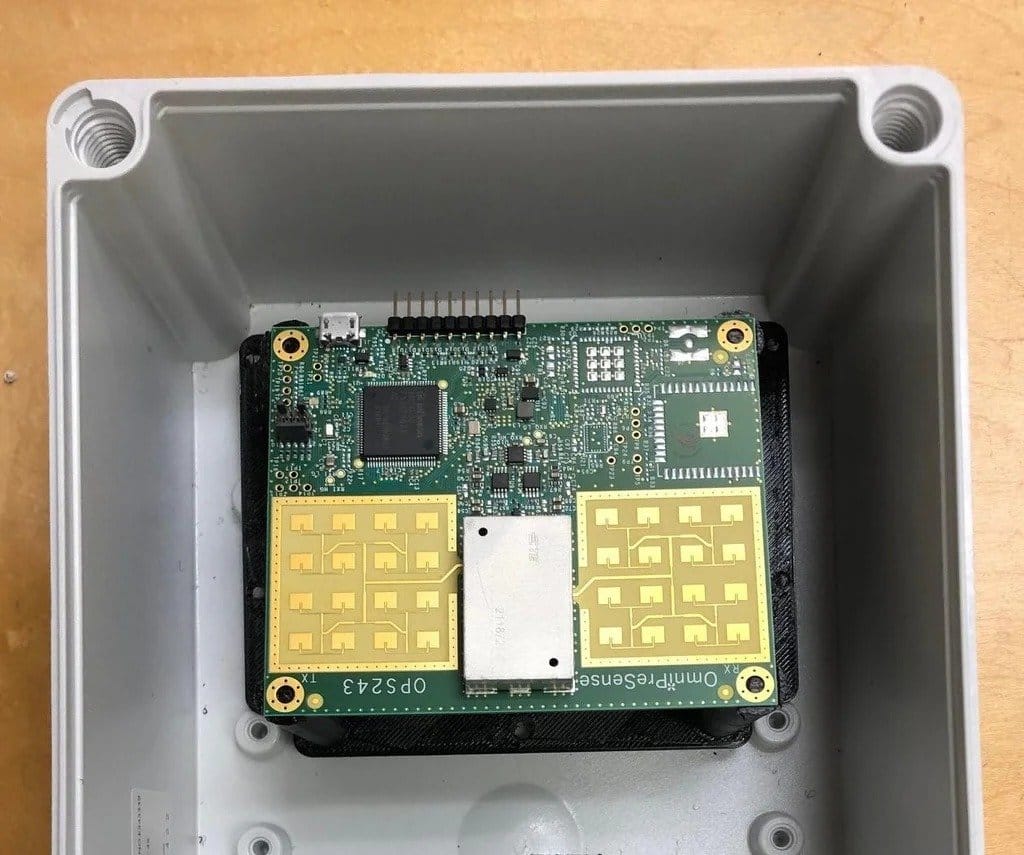 Step four: camera
The phone camera must see the road, for this you need to make a hole in the case. The camera lens size of the LG G4 was 10mm. Accordingly, the hole should be the same. To prevent water from getting into the case, you will need to stick double-sided tape around the camera. 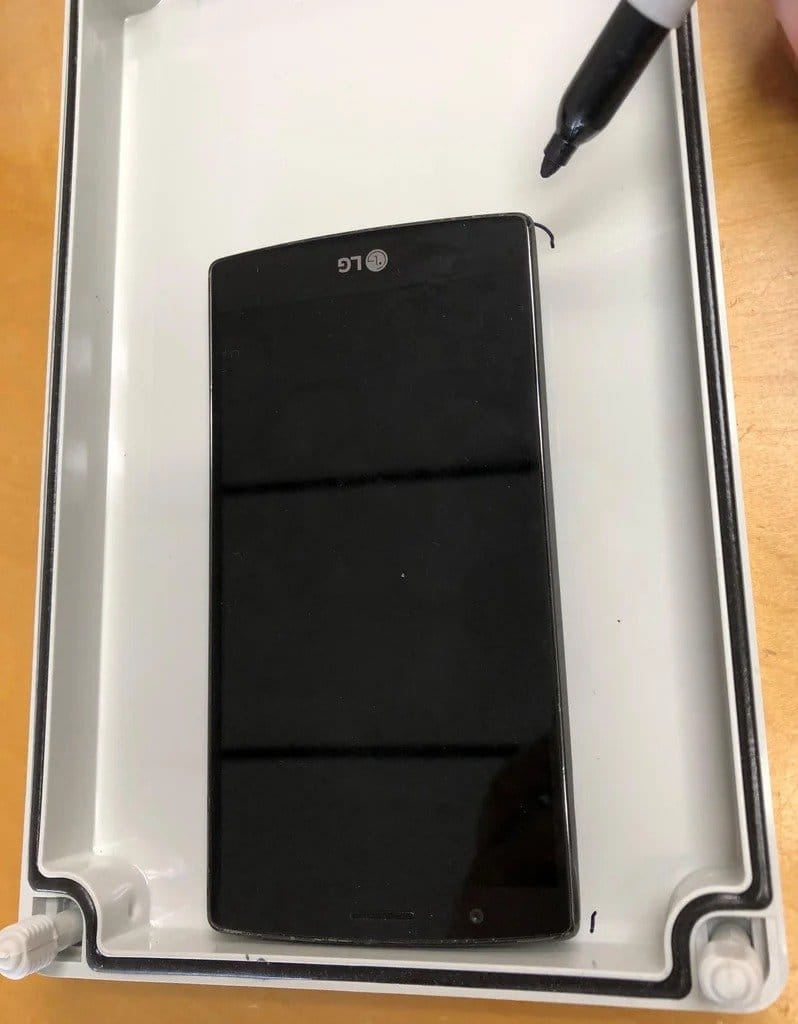 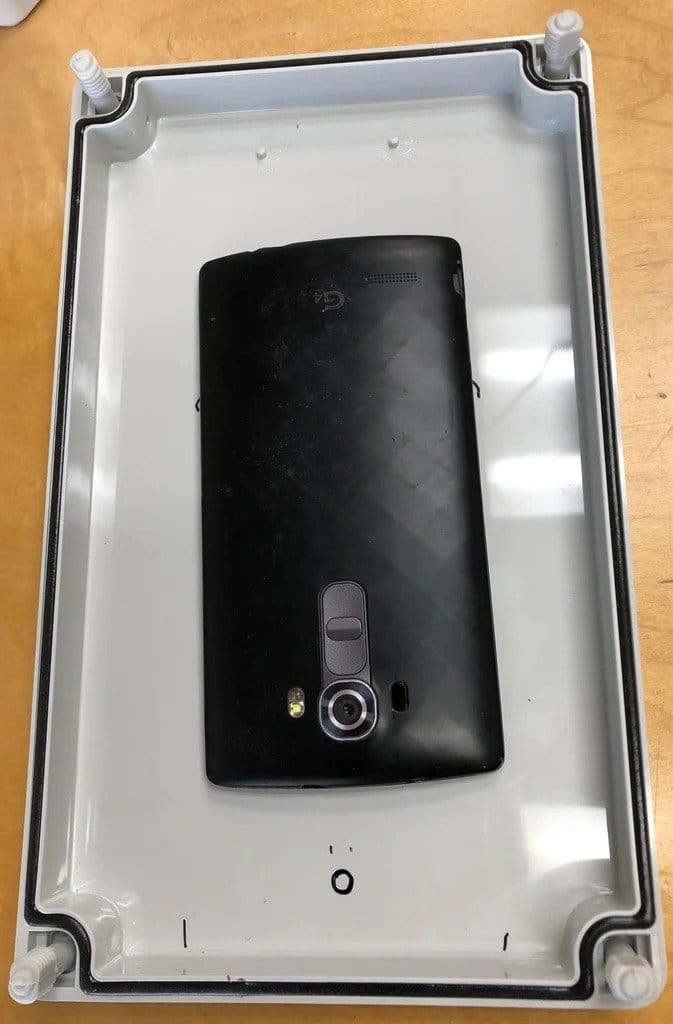 Step five: USB-OTG cable connection and assembly
Cables should be connected as shown in the photo.
Next, sticks the battery and the sensor holder. The sensor simply snaps into place.
The battery charges the phone and powers the sensor at the same time. The master used a 30,000 mAh battery. In offline mode, he measured the total current consumed by the phone and the radar sensor. This is approximately 400 mA. Thus, the battery will last about 75 hours or 3 days. 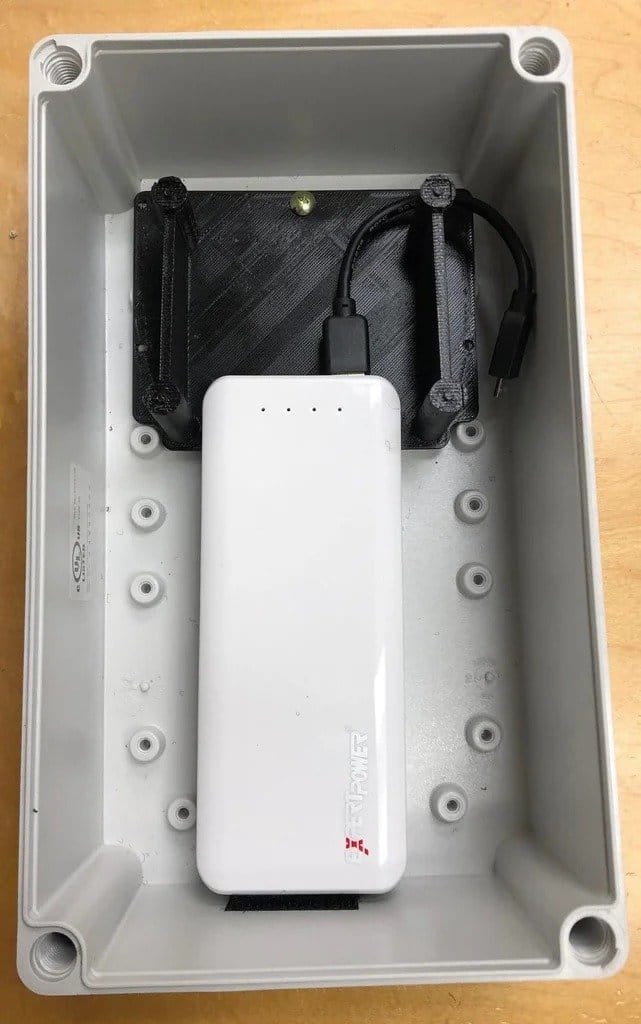 Then installs the phone and connects the cable.
Step six: setting
Now you need to set up some parameters.
Turns on the phone and opens the application. On the second screen, adjusts the speed at which the device should take a picture.
Step seven: installation
Then you need to fasten the cover with screws and install the device on the pole.
The pillar, in this case, is about a meter from the road, and I set it approximately to the north so that it does not look at the sun at all.
The sensor is installed at a height of about 3 meters and is tilted to look at the road. He turned it at an angle of 10-20 degrees, parallel to the road, so that he could “catch” cars correctly. The radar will report the speed very accurately (+/- 1.5 km/h), but there will still be an error based on the difference between where the sensor is looking and where the cars are. The inclination of the system to the road by 10-20 degrees minimizes this error (1-2%). 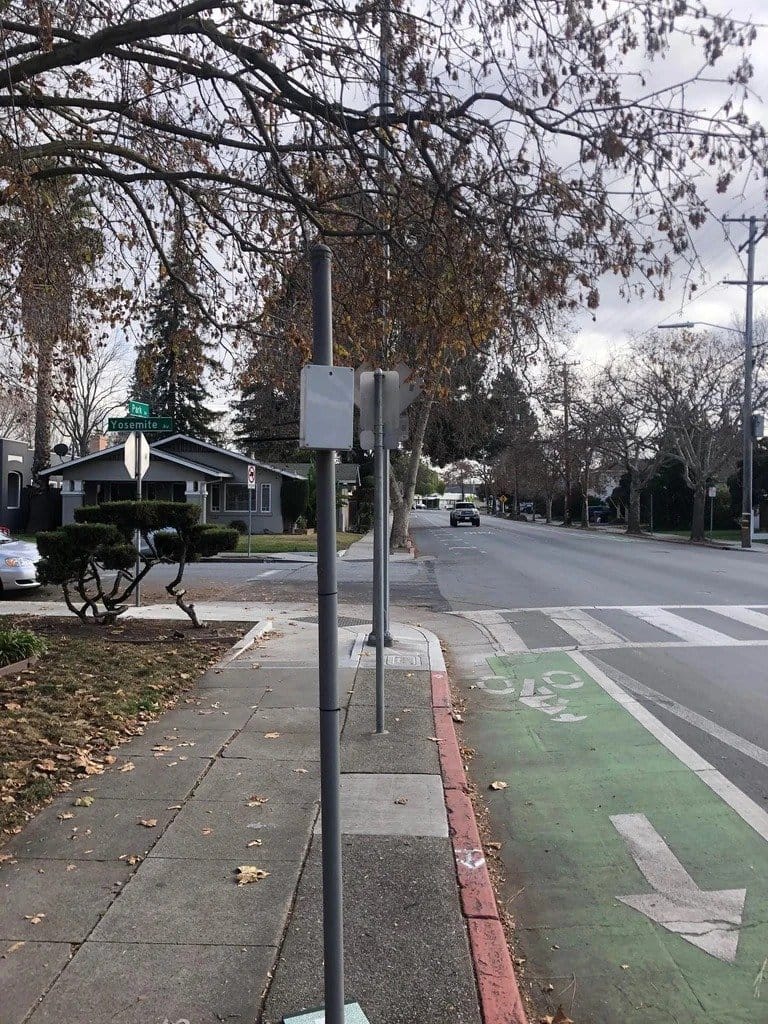 Step eight: testing
After installing the device, it's time to test it.
After a while, the master took readings and checked the result. In the photo everything is clearly visible (for safety reasons, he painted over the numbers).
Negative speed means that the car is moving away from the sensor, and positive speed means that it is approaching. This helps if there are two cars in the photo and you need to understand who has exceeded the speed.
Now it only remains to transfer the information to the destination. 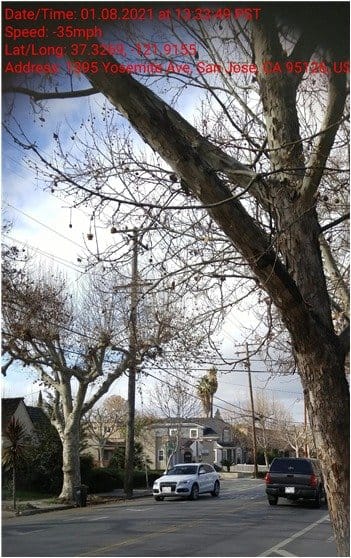