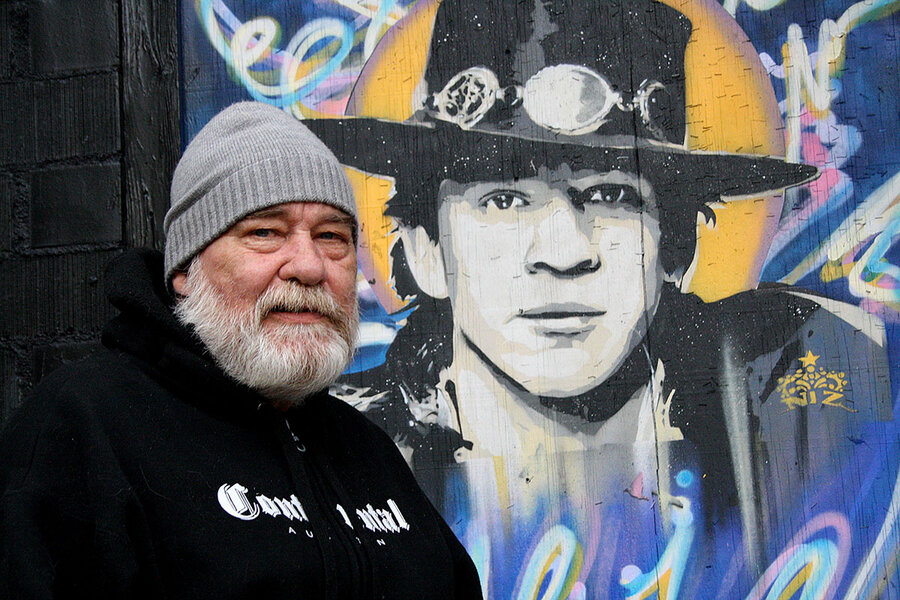 As a dirty, disheveled punk rocker fresh to Austin in 1978, Jon Dee Graham’s hippie roommates had bad news for him: “Dude, you just missed it.”

What was “it”? A weird, fun Austin that didn’t exist anymore. That’s the axiom that new arrivals have been hearing for decades. But it’s also a myth, says Mr. Graham.

Austin brands itself the “Live Music Capital of the World.” Its hip success drove property values up and rustic music venues out. Then the pandemic silenced what live venues remained – but not the music artists who are finding solace and strength in each other to stay relevant and thrive.

On any given night pre-COVID-19 there could be over 100 shows happening in Austin, including rock, opera, and everything in between. That environment helped Mr. Graham craft a decadeslong, genre-spanning career that was so influential the Austin Chronicle declared it “too [darned] complicated” to place him exactly within the city’s family tree. He’s opened for The Clash and the Ramones. He’s a three-time inductee into the Austin Music Hall of Fame. He’s seen local acts like Spoon and Gary Clark Jr. hit the big time.

He doesn’t feel like he’s missed anything. Until now.

“We’re rapidly coming up on it being a full year since we played in public,” says Mr. Graham, whose recent performances have been “live” – Facebook Live – from a floral-print couch in his living room.

There are more than 250 live music venues here, making Austin (according to one article, at least) the best city for live music in the country. From the crowded dance floor at the Broken Spoke to the ornate Paramount Theatre, music accounted for over $1.8 billion in economic output in 2014, noted an economic analysis by the consulting firm TXP. In 1991 the city branded itself the “Live Music Capital of the World.”

But where sounds of folk, blues, and Americana once filled these low-rise streets around the Colorado River, there’s now the symphony of construction site jackhammers and excavators echoing off steel and glass skyscrapers. Explosive development in recent years has been pricing musicians and music venues out of the city. And after a year of pandemic restrictions, Austin’s “Live Music Capital” moniker is being challenged like never before.

In the eye of this latest storm, Austin’s music community hopes its intrinsic value is now being properly recognized. Meanwhile, musicians are finding solace and strength in each other, and the knowledge that their resilience and talent for reinvention will continue to help them survive.

“Anything that’s alive changes. If we didn’t change we’d be a dead town,” says Mr. Graham. “But people who were the foot soldiers, who made Austin the sort of place people wanted to come to … we’re just sort of kicked to the curb.”

In 1972, Willie Nelson moved back to Texas from Nashville – choosing to pitch his tent in Austin. It proved to be the start of a seminal decade for music in the city.

Iconic venues like Antone’s and the Armadillo World Headquarters – the ’Dillo – opened. “Austin City Limits,” now the longest-running music series in American history, premiered on KLRU – with Mr. Nelson the star of the pilot episode.

Since then Mr. Graham has watched the artsy, affordable college town grow into a modern jungle of condos and tech companies. The civic bird of Austin, he says, is the construction crane – the skyline is dotted with them.

About 170 people have been moving here every day in recent years. In the meantime, venues have been closing and musicians have been moving out. Owning a house has helped Mr. Graham cling on; but even before the pandemic, that was getting unsustainable. During the pandemic he’s been selling his artwork to make up for his lost income from music.

Owning a house has also been crucial for Sarah Sharp and her three children. But the jazz singer, who moved here in 1999, has had to find another way to survive. She can’t afford to live in her house all the time.

“The way I adapted was to Airbnb my house,” says Ms. Sharp.

In 2019 that meant spending 101 nights of the year somewhere else. Last year, after the pandemic canceled the world-famous SXSW festival, it meant losing 20% of her annual revenue. Property taxes increase constantly.

The city has been trying to help. The city council revised local noise ordinances to allow venues to stay open later into the night, and in 2019 it created a “live music fund” from an increase in hotel taxes. Voters approved a $12 million bond for creative spaces in 2018.

But public support has only been able to do so much amid Austin’s rising rent, property taxes, and hipster allure. The ’Dillo closed in 1980; Soap Creek Saloon closed in 1985; Threadgill’s – home to a weekly gospel music brunch – and Barracuda both closed last year. Meanwhile, companies like Dell, Oracle, and Apple have been setting up shop. In January reports broke that the Music Lab, a popular rehearsal space for decades, would be converted into a Tesla showroom.

“The [music] industry and the artists and the support folk all are an increasing priority to the city,” says Mayor Steve Adler.

Pandemic relief specifically for musicians and venues was slow to arrive – to the point that local music industry members were rallying outside City Hall. It came late last year through the city’s SAVES Resolution and the federal Save Our Stages program – worth $5 million and $15 billion, respectively. A privately funded Black Live Music Fund, to help support Black musicians in the city, launched in November.

But long term the question remains: Can Austin’s growth be maintained without destroying the artistic community that has helped fuel it?

“It has to be, because it’s existential for us as a city,” says Mayor Adler.

Jeannette Gregor hasn’t been able to work for most of the pandemic, yet she still believes Austin’s music community can not only survive, but adapt and progress.

Normally a festival production worker and employee at Mohawk, a venue in the Red River District, she co-founded The Amplified Sound Coalition last year to advocate for pandemic relief for Austin’s music community.

“This is an opportunity,” she says. “We have time to think about these things. We can look [critically] at our practices.”

She’s not alone. Indeed, changing with the times has been a hallmark of Austin’s music scene. Look no further than Antone’s. The blues hub has had six locations since it opened in 1975. Austin’s musical center of gravity has shifted constantly through the decades, riding the peaks and troughs of real estate values.

Where downtown Sixth Street once dominated, there’s now East Sixth, the Red River District, and South Austin – the latter with Sam’s Town Point at its heart, another potential vision of Austin music’s future.

Ramsay Midwood found Sam’s by accident after taking a wrong turn on his way to a Super Bowl party in 2003. Searching for places to gig, the country blues singer impressed the owners of the nondescript dive at open-mic nights and soon became a regular.

As condo buildings and mall complexes began rising around Sam’s, Mr. Midwood was talked into becoming a co-owner of the “lowfalutin’” oasis of live music. Now, hybrid outdoor/indoor venues like this are likely to be the short-term (at least) future of live music in Austin.

“I kind of fell into it over there,” he says. “Now all of a sudden it’s in the middle of like eight new bars, just because of the nature of the city. It’s growing that way.”

Austin “seems like it’s getting back to what it used to be,” he adds. “The same spirit is here, it’s just not in the same place.”

Geography may not be all that shifts. The police killing of George Floyd last summer roiled Austin as much as any other city in the country – for decades, while the city’s overall population has been growing, its Black population has been declining. In that moment, local Black musicians, like Jonathan “Chaka” Mahone and Jackie Venson, gained traction for longstanding campaigns to improve equity for musicians of color, from financial support like the Black Music Fund to more exposure in an industry they feel has long overlooked them.

“In the past I think bookers and promoters had blind spots,” says Akina Adderley, a local Black singer and songwriter. People like Mr. Mahone and Ms. Venson, she says, “have done a great job of capturing that moment to hold our city, and our gatekeepers of artistry, accountable.”

Ms. Adderley has been relatively productive, musically, during the pandemic. She’s recorded and released a single, and recorded back-up vocals for other artists – all done remotely from home. She’s performed live twice, including an audience-less “Austin City Limits” taping with Ms. Venson.

“To be reminded that you could do such a thing, perform music with humans together [and have] all that energy being passed among the band members, was really amazing,” Ms. Adderley says.

And it’s evidence of how music in Austin can adapt and survive even through these toughest of times, she adds.

“Our greatest resource is the people and the community and the really creative folks we have,” she continues. With that “we definitely have a shot at just not necessarily rebuilding, but starting anew.”

Mr. Graham yearns for that. The past year has been a shadow of his normal life. He starts his livestream at 7 p.m. every Wednesday. That’s when, for almost 25 years, he’s taken the stage at The Continental Club – the same stage where, for $2 in the 1980s, he could hear Stevie Ray Vaughan.

On a cold Wednesday night in February, Mr. Graham nestles into a floral print sofa with his son, William, performing with him. Bold black glasses accentuate his thick white beard and gray beanie. Hugging a guitar, he thanks the few dozen Facebook Live viewers who’ve been listening. He shouts, he laughs, and he sings of moonlit skies and Amsterdam sunshine “sweeter than Van Gogh yellow.” But it’s all bittersweet.

He notices that the one live audience member, his dog Winston, has slept through it. He doesn’t know when he’ll return to The Continental Club, but when he does, he says, he’ll probably cry.

“I don’t see an unchanged society coming after this,” he adds. “But the griot, the troubadour, the vaudevillian – they have never gone without work.”