This upgrade will be useful for those who have stand-alone devices powered by two series-connected 1.5V AA batteries.
One of the first purchases on Aliexpress were very practical lights with a motion sensor. 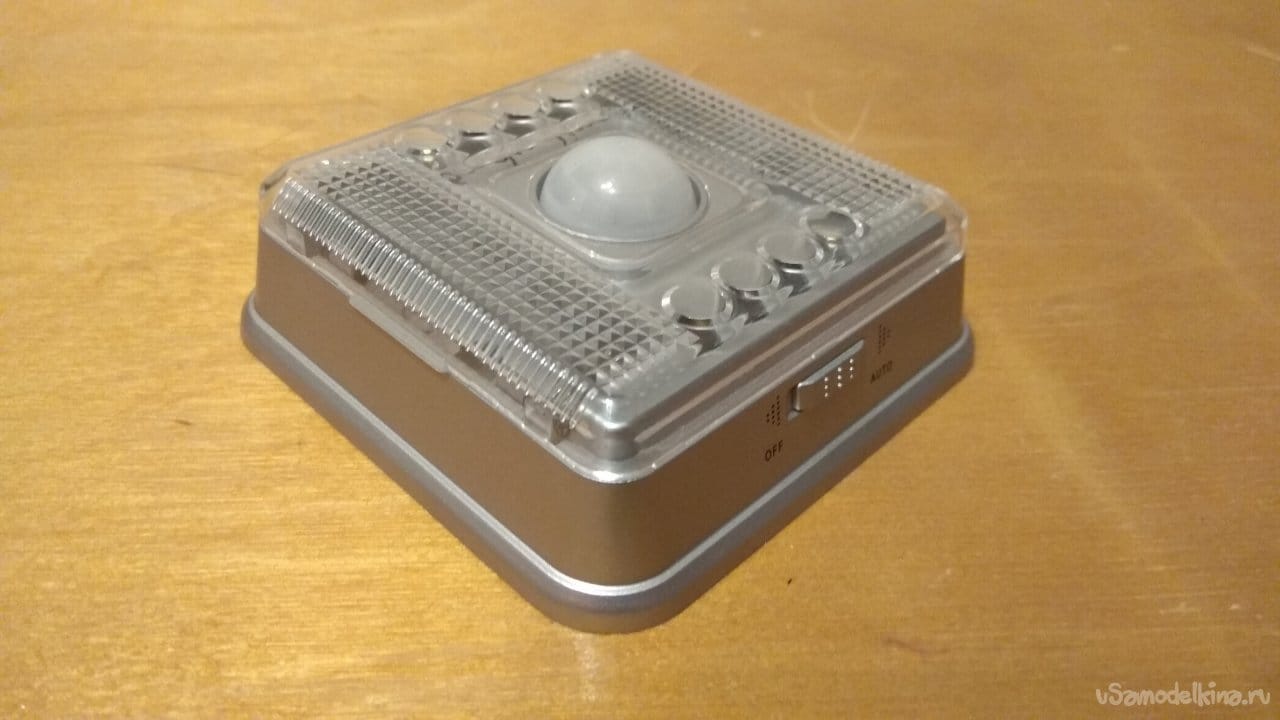 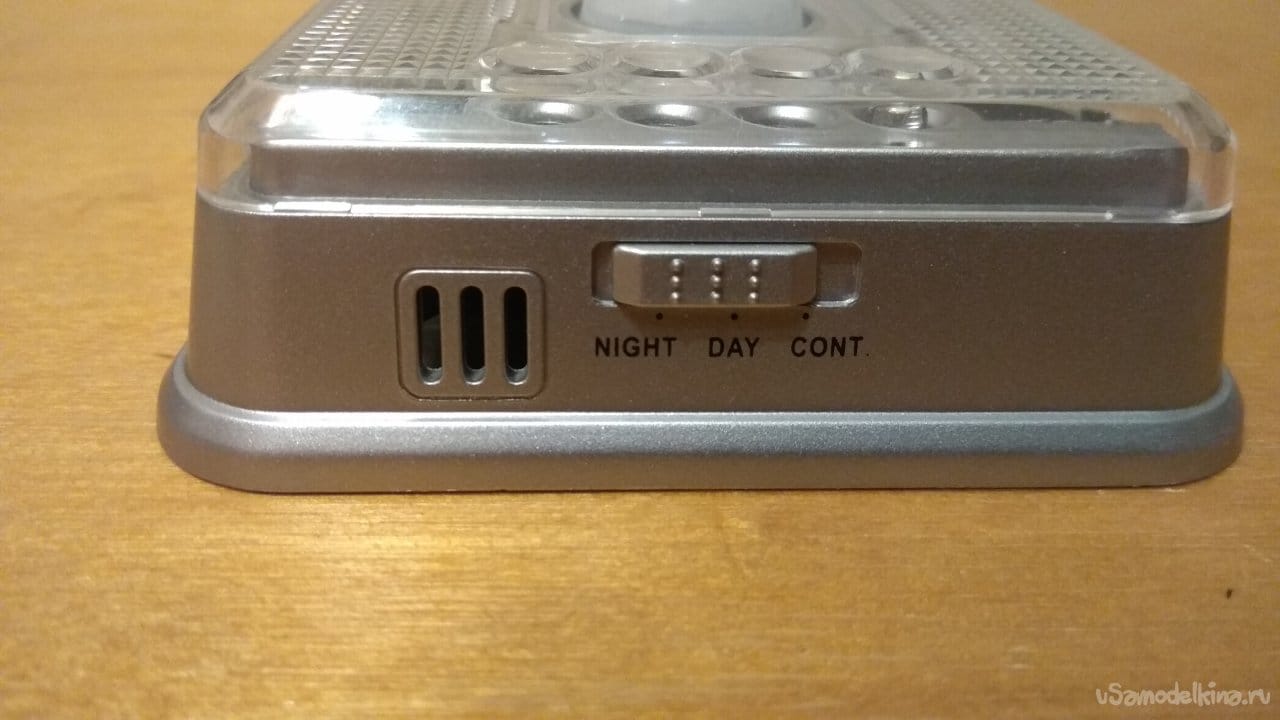 Having installed one in the corridor on the chandelier, and the second directly on the ceiling of the second corridor, I forgot what it is like to walk around the apartment at night holding on to the wall.
These lamps are powered by two AA batteries. They have three operating modes: constantly lit, triggered by movement, triggered by movement in the dark. The disadvantage of my situation is that it is dark enough in the corridors, the apartment windows face east, respectively, during the day in the “Night” mode, the lamps are still triggered by movement. Alkaline batteries lasted for about a month.
The first stage was to switch to Ni-MH batteries. But, as it turned out, the luminaire is equipped with a voltage boost converter, which works even when the voltage drops below one volt and drains the batteries to a minimum, and the weaker battery was always not just discharged to zero, but recharged in reverse polarity.
In this mode, the batteries did not last long, both cheap Chinese, that expensive branded GP, and they did not last long in the lamp, for two or three weeks. I went back to the batteries and, in order to somehow extend their operating time, I dropped six of the eight LEDs from the lamp, especially since eight shone very brightly. Now the batteries were enough for two to four months, depending on the traffic. When my nephew came to visit, the batteries were drained in three to four weeks

.
The next stage of modernization began with the advent of lithium-ion batteries in the 14500 format, which is the same size as AA batteries. It remains only to change the connection scheme from serial to parallel and install a battery protection board. The current consumed by the lamp is small and the protection board can be obtained from any faulty battery, for example, from an old cell phone. Two cheap batteries were purchased for testing.
Their capacity was greatly underestimated, instead of the declared 1300mA/h there was not even 500, and after several cycles of charging/discharging it dropped to 200 at all. But the experiment showed that the idea was working. The first problem immediately arose: with new batteries, the lamp went out and turned on again. I thought that when turning off, there was some kind of interference, I quickly ran through the circuit and soldered another 470 μFx16V to the two power supply capacitors. The lamp began to go out, everything worked. 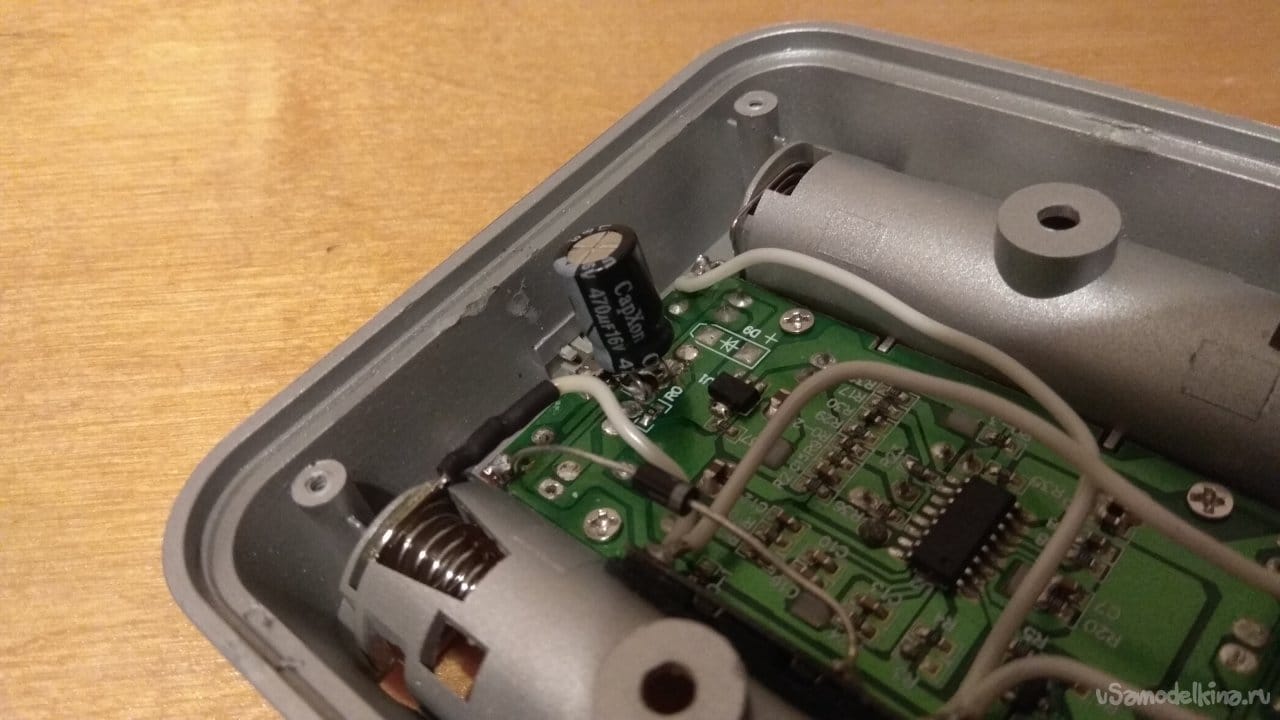 After a couple of weeks, four batteries from a well-known Chinese company Soshine were ordered. 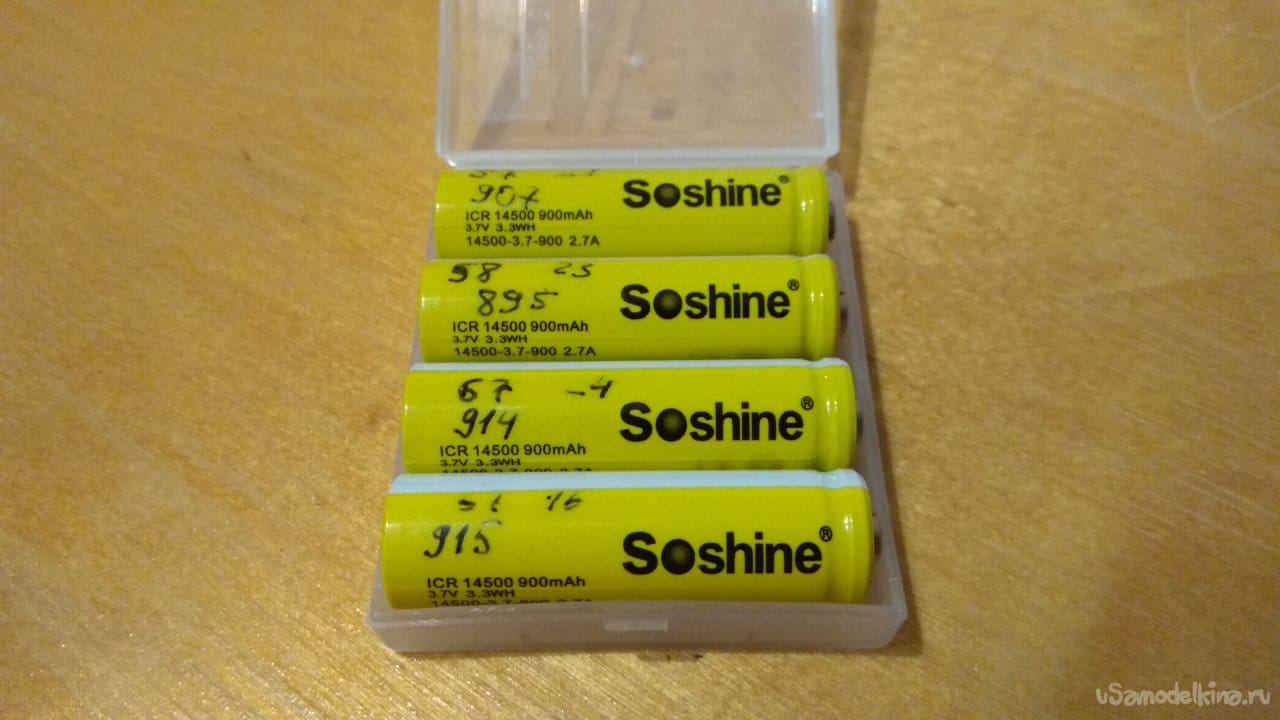 Their capacity was already close to the declared 900mA/h. I redid the second lamp. I installed them in their regular places. And here is the second problem. The lamps were on and not extinguished. More powerful fully charged batteries produced a stable 4.2V, which turned out to be a lot for the circuit. I had to look for how to cheat the scheme. The boost converter could only increase the voltage, but if it was higher than 4V, then the lamp stopped turning off. The output turned out to be outrageously simple, I just soldered a diode in series with the batteries, reducing the voltage by half a volt. 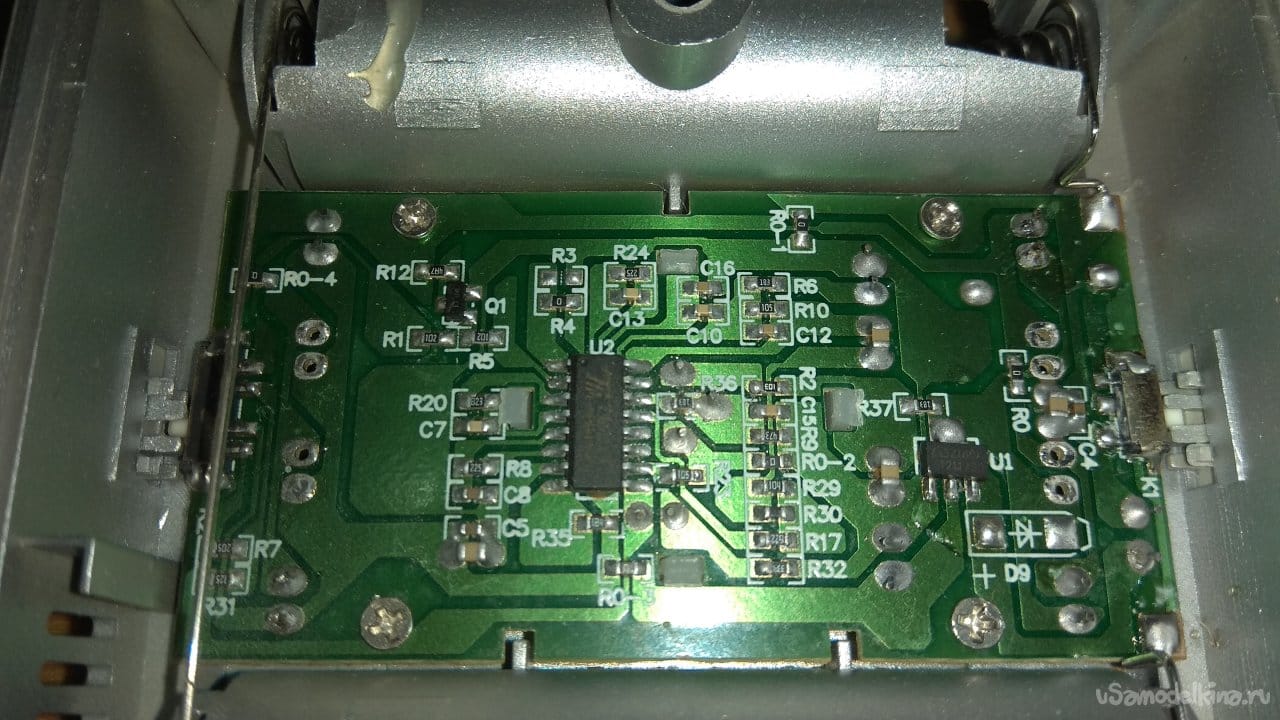 Now everything is working properly. In order not to leave the corridor in the dark while charging the batteries, I bought another set of four. The total capacity of the two batteries, even with active movement in the corridors, allows you to use the lamps for a couple of months. New batteries have been working properly for several years. 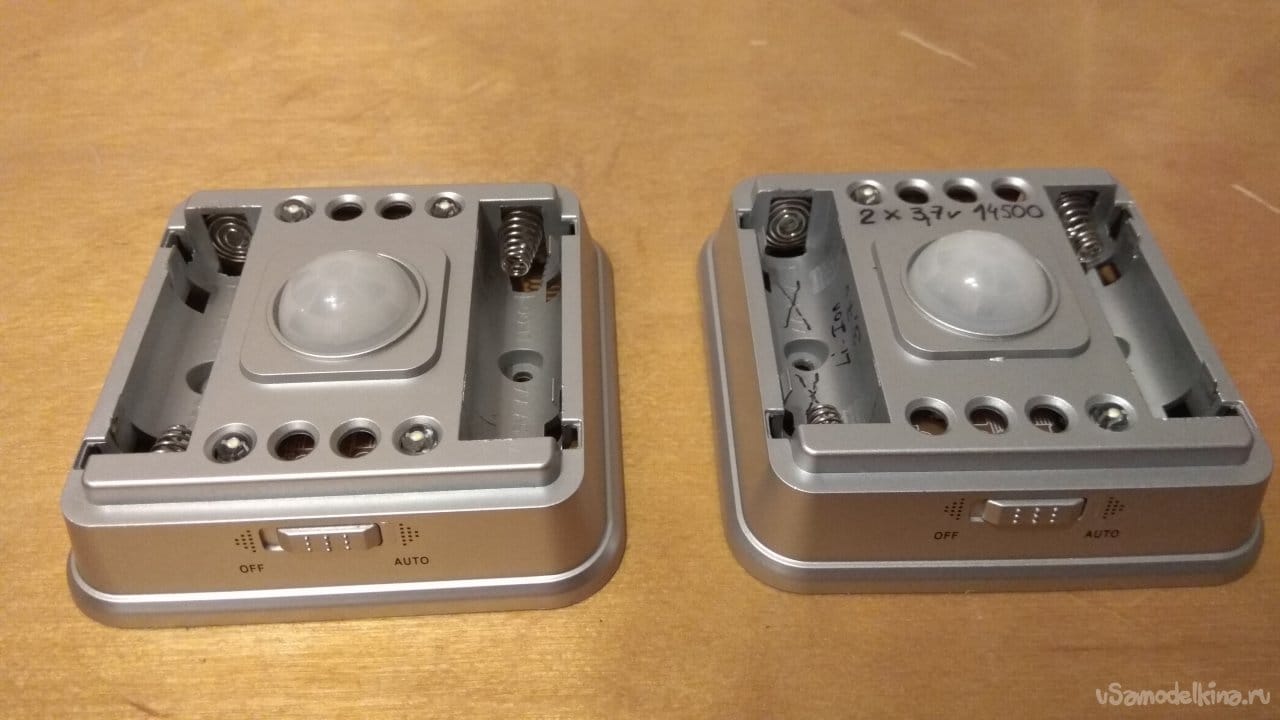 I charge the batteries with the LiitoKala Lii-500 universal charger. It itself determines the type of battery, which can be Ni-MH, Ni-Cd, AA, AAA and Li-Ion in a bunch of different formats: 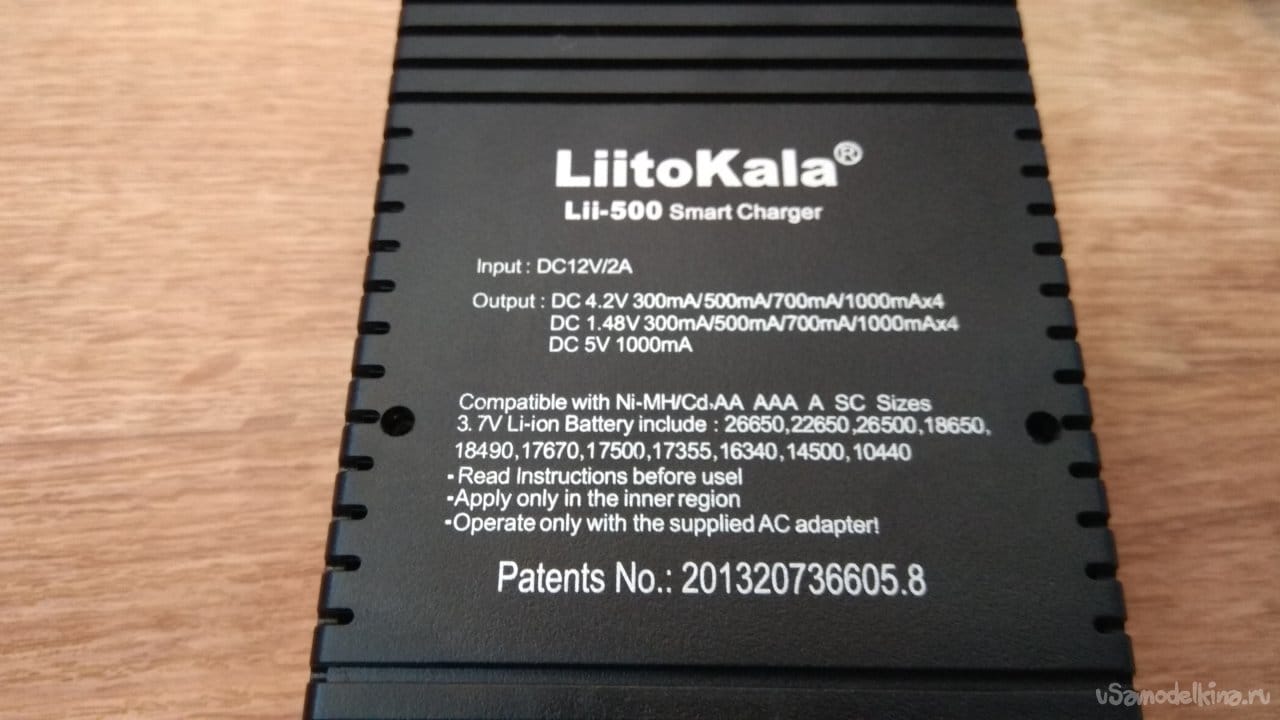 The charger allows you not only to charge batteries with different currents, but also to test the capacity by charging or discharging, depending on the type of battery.
After seeing a good revision on YouTube, for charging and testing Li-Ion batteries of other types and sizes, I brought the contacts from the first holder to the connector.
The question topic is automatically published in the social. site network – follow the answers there too: