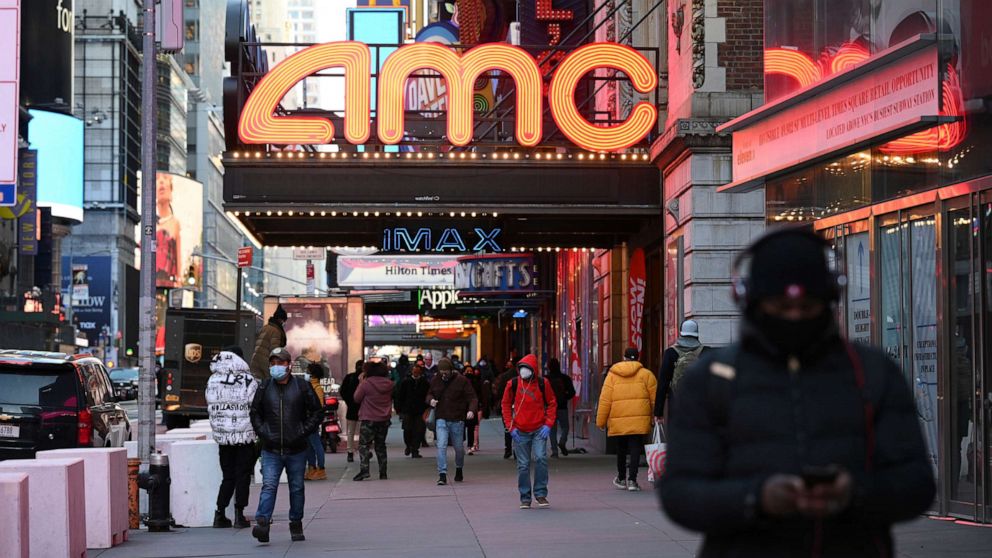 AMC Entertainment posted a net loss of $4.59 billion for 2020 as the coronavirus pandemic forced most of its theaters to shutter for a large chunk of the past year.

The nation’s largest movie theater chain also said in an earnings report Wednesday evening that it lost some $946 million in the last quarter of 2020 alone.

Even before the pandemic upended the economy, the movie theater industry was already under pressure amid the rise of streaming services.

Despite facing what he calls “the most challenging market conditions in the 100-year history of the company,” AMC CEO Adam Aron expressed optimism for the movie chain’s future as restrictions ease and a vaccine rollout has finally brought an end to the pandemic in sight.

“As we sit here today, we see that vaccinations are occurring in the United States at a brisk clip, our theatres in New York City have finally opened with theatres in Los Angeles likely opening shortly as well, blockbuster movie titles are currently scheduled to be released in significant quantity in the coming few months, and we have more than $1 billion of cash on hand,” Aron said in a statement.

“Taking these facts together, we have reason to be optimistic about AMC’s ability to get to the other side of this pandemic,” he added.

Aron also noted that the company has been working hard to address its reported liquidity issues that had raised alarm bells for investors and the public last year.

“Since March of 2020, we have raised approximately $2.2 billion of gross cash proceeds from new debt and equity capital, securing more than $1 billion of concessions from creditors and landlords, raising more than $80 million from asset sales and seeing $600 million of convertible notes convert from debt to equity,” Aron stated.

He continued: “I am confident that the actions that we have taken have positioned us well to capitalize on pent-up demand for movie going as the rollout of vaccines accelerates.”

The company also said that as of October 2020, it has resumed operations at nearly 80% of its domestic theaters but then new mandates in response to a resurgence of COVID-19 forced many of them to close again. As of the end of December 2020, AMC said it had resumed operations with limited seating capacity at approximately 67% of its domestic theaters.

AMC stock, which at one point was among the so-called “meme stocks” touted by the Reddit r/wallstreetbets forum, climbed nearly 5% Thursday morning on the heels of the earnings report.

No proposal to recognise Bitcoin as a currency: FM Nirmala Sitharaman