Greetings, Samodelkins!
In this article, we will analyze in detail the process of assembling a wireless network amplifier with wide functionality and the ability to create a multi-room system over a Wi-Fi network.
Similar A factory-made device costs a lot, so it makes sense to try building a wireless network amplifier yourself. Further instructions are taken from the YouTube channel “Radio-Lab”.
To assemble this device, the author bought various components.
The amplifier case was purchased by a master at the local radio market.
It is made of metal, matte black color. The case itself is very compact, but there is enough space in it to install the necessary components. Also, insulated RCA connectors for line input and a spring-loaded terminal block for connecting acoustics were bought on the radio market.
You will also need 4 rubber feet and a 10A switch for two pairs of contacts and 2 position, and to supply power, take a 5.5×2.5mm connector.
You will also need a microphone shielded audio wire and a regular stranded wire with a cross section of 0.5 square.
China ordered two 2.4GHz Wi-Fi antennas with wires and connectors.
We will assemble the amplifier based on the UP2Stream module from Arylic. For example, there will be a version 4 mono module, which can be turned on with both a stereo output and a mono output. Here is everything that was in the box:
Carefully remove the main module from the antistatic bag. This is how the Up2Stream V4 Mono module looks like.
Instructions are attached to the module. It is quite detailed and contains all the information you need.
The image below shows the main characteristics of this module.
The board has a LAN connector, a USB port, line-in, outputs and a power connector. On the other side of the board there is an infrared receiver and an LED indicator that displays various modes of the device.
The board also contains various additional connectors for expanding the functionality. There is also a protective diode. On the board itself it is signed what and where to connect.
The amplifier in this D class module is made on the basis of the TPA3116D2 microcircuit, but with the correct and well thought-out piping, with which the TPA3116D2 microcircuit plays significantly better than in more budgetary analogs.
There are jumpers on the board to switch to stereo or mono output.
This is not just an amplifier, but a kind of sound mini computer with wide functionality, which, in addition to the available standard line-in, Bluetooth and USB, can work via Wi-Fi with various music services via the network Internet and transfer music over Wi-Fi network. And if you use several of these modules, then they can form a sound wireless network – multi-room and much more.
In general, the functionality of this module is very large.
All the components are there, now you can proceed directly to the assembly of the future amplifier. The first step is to remove the top case cover.
As you can see, the board fits perfectly inside. Install it in such a way that the connectors go into the inside of the case.
Then we make holes on the back wall for installing the necessary elements and also on the front wall for the switch and operating mode indicators.
After that we install all the necessary parts and connectors on the back wall and on the front wall too. 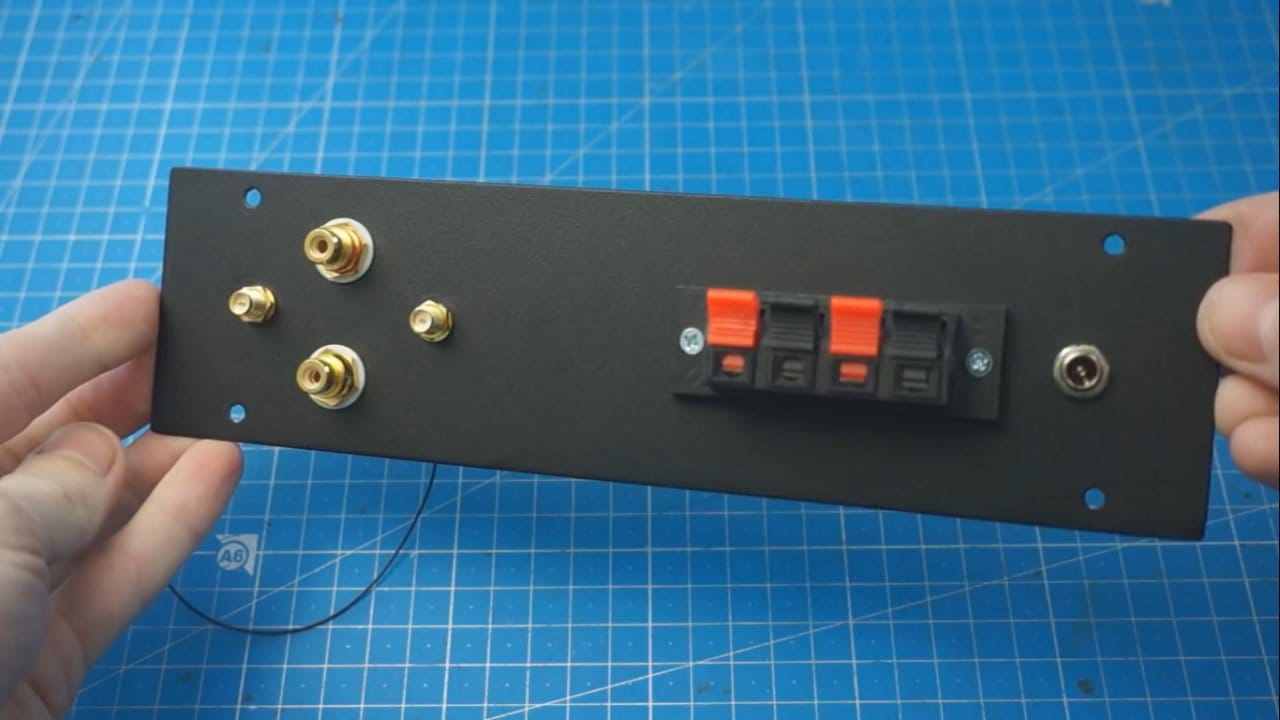 Install the board on the racks, so it is more convenient and there will be no risk of a short circuit to the case. We screw the racks onto the bolts, and then install the board itself on them.
Everything is installed, now you need to connect the connectors to the board using wires. We will also move the LED indicating the operating mode from the board to the front panel. Let's start with shielded wires. Solder them to the corresponding RCA connectors.
Then we solder the wires to the spring-loaded connector, and the wires to the power connector. The positive lead is passed through the switch so that you can turn off the power to the amplifier. One pair of switch contacts will remain free, they will be needed in the future.
Now you need to connect the wires to the board. What and where to connect is drawn on the board itself.
First, observing the polarity, we solder the power wires to the corresponding contacts on the board.
We connect the output wires to the connector from the amplifier and then connect the connector to the board. The wires from the RCA connectors must be soldered to the line-in pins on the board.
The connectors of the purchased external Wi-Fi antennas are slightly different from the antenna connectors that came with the amplifier, but they fit. To check, you can connect this way, but in the future it is advisable to replace the connectors (wires) with the correct ones.
There are two antennas: one for Wi-Fi and the other for Bluetooth. Let's take a 5 mm power supply LED. It is impossible to connect it just like that, without a current-limiting resistor, so we solder the resistor to one of the LED legs.
We solder the wires from the resistor with the LED in parallel to the power wires of the amplifier. The polarity must be observed here. When the indicator LED is soldered, you can install it in its place – on the front panel.
We take out the LED on the wires to indicate the operating mode and also install it on the front panel in a previously prepared hole.
You can also put the infrared sensor for the remote control on the front panel, but the author does not plan to use this remote control, so there is no need for an IR receiver.
As you can see, there is nothing complicated about the assembly, the main thing is not to rush. In the future, you can additionally add an acoustics protection board, especially since there is still a lot of space in the case.
It remains to close the top cover and the assembly is complete. But let's not rush, but first let's check if we did everything right, and supply power to the assembled Wi-Fi amplifier. To power the device, a power supply from a laptop with a voltage of 19V and a current of 4.74A is suitable.
Connect the power supply and turn on the amplifier.
As you can see, the indicators are lit, therefore, there is power. The lower indicator shows the actual presence of power, and the upper one displays the operating modes.
We check it again and you can close the top cover. The network Wi-Fi amplifier is assembled and looks like this.
The fact that there is practically nothing on the front panel is not scary, such an amplifier on the front panel usually does not need a lot. For verification, the author uses acoustics Radio engineering S-30B.
Everything is powered, connected and ready to be tested. This assembled amplifier can already be used as an ordinary non-network amplifier without Wi-Fi, but for control you need to either assemble a button block according to the diagram from the instructions or buy a remote control. But we want to use the assembled amplifier to the fullest, and for this we have to connect the device to the home network (to the router), and download the 4STREAM application to the smartphone.
For Internet services to work on the amplifier, the router must be connected to the Internet. The Internet is necessary for the operation of Internet radio and various streaming music services such as Spotify and the like.
For more information about setting up and testing the finished device, see the original video of the author:
Thank you for your attention. Until next time!