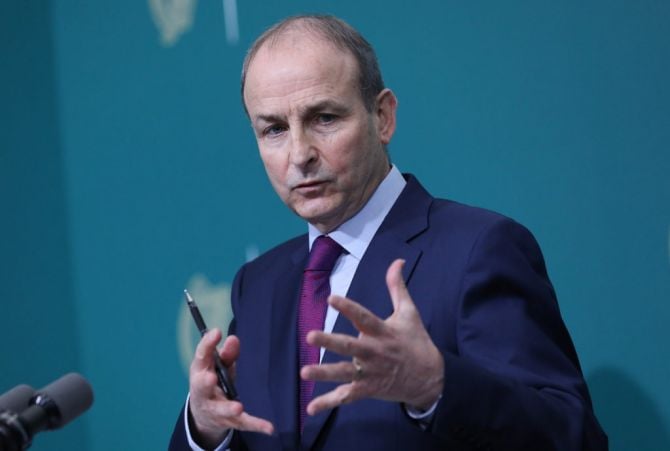 The Davy scandal was “unacceptable” and revealed an “appalling level of greed” that has damaged the financial services sector, the Taoiseach has said.

Micheál Martin has criticised executives at the stockbroking firm for frustrating efforts by the Central Bank and the financial regulator to uncover the truth of the matter.

The Government will soon bring forward new legislation to strengthen powers to sanction individual executives in the financial sector, he told the Dáil.

Mr Martin said: “The behaviour by the Davy executives was absolutely unacceptable. I think it reveals an appalling culture of greed and has damaged the reputation of the financial services sector in this country.

“Executives in business, or in the financial services, should never put personal gain above their duties and responsibilities.”

He praised the decision of the National Treasury Management Agency (NTMA) to strip Davy’s authority to act as the primary dealer in Irish government bonds.

Mr Martin added: “It’s absolutely unacceptable, first of all that this has been ongoing since 2014, and that the executives sought to frustrate the efforts of the Central Bank and the regulator to get to the truth of this issue, and to bring this issue to a conclusion.”

Speaking during Leaders’ Questions on Wednesday, the Taoiseach said legislation promised, under the Programme for Government, to deliver heightened accountability in the financial sector.

“That said, we do believe that the existing financial legal framework to hold individuals responsible for the behaviour needs to be strengthened.

“In the Programme for Government, provision has been made for the introduction of legislation in relation to senior executive accountability regime, to deliver heightened accountability in the financial sector.

“We will publish the heads of that Bill soon.

“That in itself would drive further positive changes in terms of culture in the financial services industry, and enhanced accountability, whilst simplifying taking sanctions against individuals who fail in their financial sector roles.”

The Taoiseach was responding to questions from Sinn Féin leader Mary Lou McDonald.

“The toxic culture that brought this country to its knees a decade ago it seems is truly alive and well,” she said.

“And people now ask themselves correctly, are we back to the beginning? Here we go again.”

She continued: “It’s taken six years to get to this point, and still no individuals have been held to account.

“Those who were responsible continued to play a dominant role in the financial sector throughout those six years.”

Ms McDonald said none of the 16 executives involved in the Davy’s scandal has been named.

“We do need to know where they are now, where they work now,” she said. “Do any of them hold positions in Government departments, or in banks in which the State has a stake?”

She added that their behaviour has been seen as acceptable by successive governments, and that only public pressure has led to people being held to account.

Mr Martin responded that Sinn Féin members have themselves been involved in financial transactions that were shady enough “to make even a stockbroker blush”.

“This donation is more than 1,600 times the maximum affordable donation under the Irish electoral law.

“That was a shady enough transaction to make even a stockbroker blush.”

Central Bank officials have said that senior staff at the centre of the Davy probe will not face criminal sanctions as they believe no criminal law was broken.

Derville Rowland, director of financial conduct at the Central Bank of Ireland, said the enforcement team that investigated the stockbroker did not believe there were criminal reports to pass on to other agencies.

Ms Rowland told the Oireachtas Finance Committee on Monday that the full details of the investigation were out in the public domain.

Davy said on Monday that it had closed its bond desk following the fallout over its fine for breaching rules in relation to a bond deal in 2014.

It came hours after the NTMA withdrew the stockbroking firm’s authority to act as primary dealer in Irish government debt.

The NTMA described the company’s behaviour as falling substantially short of the standards expected.