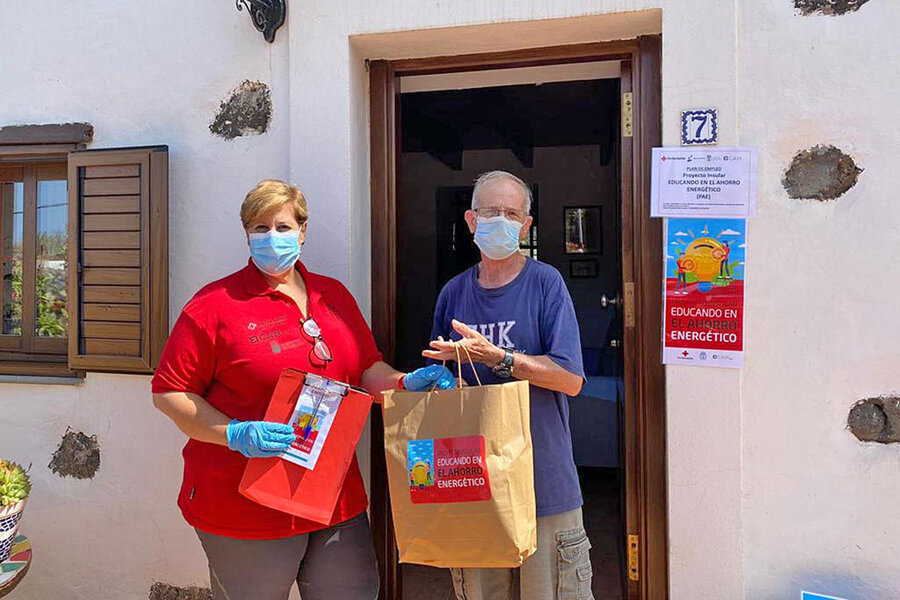 The steep volcanic rock in La Restinga, on the southernmost tip of El Hierro, is covered in green shrubs year-round. On the small farm that Alberto Barroso runs a few miles from his apartment, the sprightly stems of potatoes and onions peek through fresh soil; his hundreds of goats bleat into the clean air.

Mr. Barroso, born in Argentina, has lived in El Hierro for 18 years. But he’s only dipped his hand in ecological endeavors this past year. After losing his job as a building engineer, he joined a six-month joint program between the Red Cross and Gorona del Viento – the island’s hydroelectric plant – to learn about energy conservation.

In the program, trainers taught the group of 10 how to reduce the carbon footprint of individual homes through energy saving and efficiency, and how to identify electrical risks. After three months in the classroom, they visited older or isolated residents to help make their homes more eco-friendly.

Deploying new renewable energy technology is critical for energy conservation. But just as important is getting communities to embrace its adoption at the grassroots level, as the island of El Hierro has.

For Mr. Barroso, the course was an eye-opener on the importance of adopting a greener lifestyle. “I had LED lights before, but since the program, I’ve changed everything in my house to make it more sustainable,” he says. “We need to change our way of life, especially now with the pandemic.”

The project is part of a wider vision to make El Hierro a global leader in renewable energy. Thanks to Gorona del Viento, the island saves over 7,000 tons of diesel fuel and avoids more than 24,000 tons of CO2 emissions each year – with greater savings planned when it incorporates solar energy into the plant by 2050.

For an island of 11,000 inhabitants once completely dependent on outside sources for its energy needs, with an economy held up almost entirely by agriculture and tourism, these environmental initiatives are not just a means of becoming self-sufficient. They’re also a source of pride, as the project gets buy-in from local communities and uses peer-to-peer teaching to create long-term environmental change.

“It’s extremely important to count on society, especially when it comes to environmental projects, because we’re in a moment with the pandemic where we need to change our way of life,” says Káhina Santana, a sociologist at the Universidad de Las Palmas in Gran Canaria, who studies participatory projects related to ecological transition. “It will be hard to advance if only part of society – engineers or other experts – are the ones with the answers.”

“We showed how effective it was”

The volcanic island of El Hierro, the second smallest and the most remote of the Canary Islands, has never been connected to Spain’s power grid. It had relied on imports of thousands of tons of diesel fuel each year in order to power its electricity generators. But in 2014, it inaugurated Gorona del Viento.

The wind and water turbine farm uses a series of industrial windmills and two reservoirs to maintain the island’s electricity demands. Surplus energy is used to pump water between the reservoirs, and when the winds die down, water collected in the upper reservoir is released to the lower one to generate electricity from the turbines – thus maximizing the uptime of power supplied by renewable energy. Only when the winds are calm and the upper reservoir is empty do diesel generators attached to the power grid kick in to fill the breach.

The technology itself isn’t necessarily innovative, but it’s the first time a system has used wind together with water to supply electricity. In 2020, it covered 42% of the island’s energy needs with renewables and, this past summer, recorded 25 days of using 100% renewable energy.

“Wind is the principal factor in this system, but it’s a very changeable energy so we tried to correct it with water, which is stable,” says Tomás Padrón, former head of the Unelco-Endesa electricity company in El Hierro and mastermind of Gorona del Viento. “This combination gives us the stability needed in order to provide enough power to the whole population.”

El Hierro has a unique topography – it boasts 500 volcanoes, reaches over 4,900 feet in altitude, and is roughly the size of Madison, Wisconsin. But Mr. Padrón, who is also the former president of the island council, says that the technology used at the power farm could be easily transferable to locations that have similar meteorological conditions.

In the meantime, Gorona has made a huge impact on how residents of El Hierro see renewable energy – starting with Mr. Padrón himself. He’s currently installing solar panels at his home to become more energy self-sufficient.

“At first, nobody believed in the Gorona project, but then we showed how effective it was,” says Mr. Padrón, who is now retired and spends his free time tending to his garden of nearly three dozen trees in Echedo, in the north of the island. “Little by little, people are installing solar panels or wind energy in their homes to run their appliances. They’re becoming more conscientious about the value of renewable energy for themselves and for the planet.”

Renewable energy has been pushed to the forefront of public policy amid the COVID-19 pandemic and ahead of the next United Nations Climate Change Conference, expected to be held November 2021 in Glasgow.

Because the pandemic has disrupted the regular U.N. climate commitment cycle, it has been nearly impossible to account for how well countries have met the goals outlined in the 2015 Paris Agreement: to reduce greenhouse gas emissions in order to keep global warming under 2 degrees Celsius. That’s where the participation of even small communities can play a vital role in reducing overall energy consumption.

“El Hierro has been the perfect place to conduct experiments because we have so many natural resources and have had problems accessing water in the past,” says Santiago Miguel González, CEO of Gorona del Viento. “Because globally the climate is changing for the worse, and very quickly, we need to continue to implement renewable energies. The only way to reverse climate change is to stop producing harmful toxins into the atmosphere.”

But governments and public institutions can’t do it alone. “The local population needs to do its part in reducing its own energy consumption,” says Armando Rodriguez Betancort, a technical educator for the Red Cross-Gorona del Viento program this past year, “not just to lower individual electricity bills but to contribute to the whole system.”

That’s why the six-month program has aimed to make participants into eco-ambassadors, providing them not just with practical skills that will help them on the job market as future auditors or technicians, but to spread their knowledge to island residents. During their visits to 121 homes, the group changed out old light bulbs for LEDs, exchanged older energy-guzzling refrigerators for new models, and rerouted cables to reduce fire risks.

Maribel Narvaez Batista, a former preschool teacher, came to El Hierro with her two children last October from Venezuela. She says she never had to think about the cost of heating her home or how to recycle clothes until joining the program.

But more than anything, it was the home visits that changed her mentality about the ecological transition. “It was so satisfying,” says Ms. Narvaez Batista. “Each family we visited was so happy to learn how [renewable energy] could help them save money and make their lives easier. Some cried and told us, ‘Please come back to visit soon.’”

In La Restinga, Mr. Barroso says he’s waiting to see if his new ecological ventures pan out before he embarks on a job search. In the meantime, the Red Cross-Gorona del Viento program has given him a lot to think about, in terms of what kind of life he wants to lead.

“This program was originally intended for people who didn’t have jobs, to teach us new skills,” says Mr. Barroso, “but it really helped me to put things in perspective about how dependent we all are on energy. It totally changed how I live, think, and confront reality.”