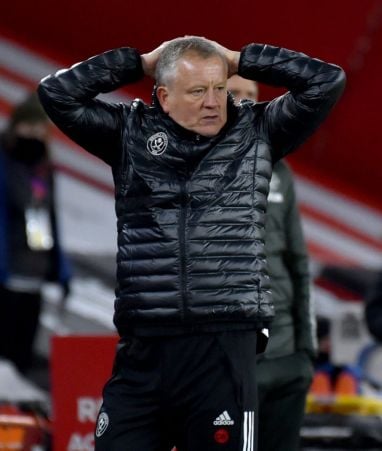 An announcement is expected later on Friday which will confirm the 53-year-old has been relieved of his duties as manager.

The Blades cancelled their Friday morning press conference with a player amid reports Wilder was set to be sacked, with the boss scheduled to face journalists via Zoom in the afternoon.

But the club confirmed a player would not be appearing for interview as planned, suggesting something was going on behind the scenes.

Tensions between Wilder and club owner Abdullah Bin Musa’ad Bin Abdulaziz Al Saud have heightened recently, with Wilder last week stating he did not know if he would still be in charge next season, despite confirming he wanted to remain at Bramall Lane if the board and owners “stick to the plan”.

Some reports suggest there have been clashes with ownership over plans to appoint a director of football, with Prince Abdullah feeling Wilder’s recruitment record has been below par.

However, Wilder is viewed as one of the most successful managers in the club’s history and his time in charge will be remembered fondly by Blades supporters for his achievements, despite this season’s disappointment.

After taking charge of his boyhood club in the summer of 2016, Wilder got the Blades promoted as League One champions at the first time of asking before winning promotion from the Championship two seasons later, ending the club’s 12-year absence from the top flight.

The Blades were a revelation last season on their return to the Premier League, finishing ninth and maintaining a challenge for European football for the first time in the club’s history right up until the final week of the campaign.

However, Wilder’s team have endured a miserable run this season, suffering the ignominy of making the worst ever start to a top-flight season in the history of English football.

The Blades have lost 22 of their 28 Premier League matches and are bottom of the table with only 14 points – 12 points from safety with 10 matches remaining.

However, they have reached the quarter-finals of the FA Cup, where they travel to Chelsea next weekend.

The Ashes: England’s need to score big, David Warner’s form, rest and rotation – pundits assess where the urn will be won and lost