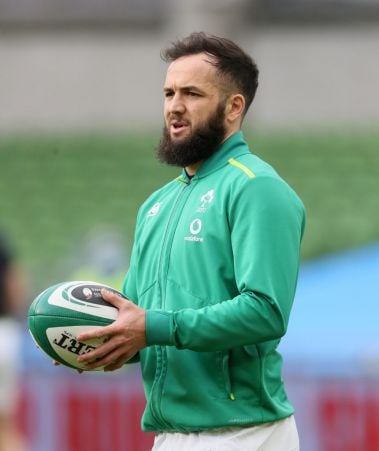 Ireland scrum-half Jamison Gibson-Park has been preferred to the fit-again Conor Murray for Sunday’s Guinness Six Nations match against Scotland.

Murray missed the defeat to France and win over Italy due to a hamstring injury and only returns to the bench, with Gibson-Park retaining the number nine jersey to make his third successive start.

Front-row pair Cian Healy and Rob Herring are recalled in place of Dave Kilcoyne and Ronan Kelleher, while Keith Earls for Jordan Larmour on the right wing is the only other change to Andy Farrell’s starting line-up for the trip to Murrayfield.

Ulster back Jacob Stockdale returned to the Ireland squad ahead of this weekend’s game following a knee injury but will not be involved.

Murray’s inclusion in the matchday squad is the sole personnel change to Farrell’s 23 and means Munster team-mate Craig Casey, who made an impressive debut from the bench in Rome, misses out.

Ireland travel to Edinburgh looking to build on their routine 48-10 win at Stadio Olimpico a fortnight ago after suffering back-to-back defeats to Wales and France at the start of the tournament.

Robbie Henshaw and Garry Ringrose are once again the midfield duo, while Munster man Earls – Ireland’s second highest try scorer with 33 – breaks the Leinster monopoly of the backs by replacing Larmour to line up alongside full-back Hugo Keenan and left winger James Lowe.

Loosehead prop Healy and hooker Herring are restored to accompany tighthead Tadhg Furlong at the front of the pack, ahead of Farrell’s first-choice second-row pairing of James Ryan and Iain Henderson.

Openside flanker Will Connors is rewarded for his two tries in Italy with a fifth start for his country, while CJ Stander continues in the centre of the back row to win his 50th Ireland cap and Tadhg Beirne holds on to the blindside role.

Prop Andrew Porter has to be content with a place among the replacements for the second game in a row after Furlong was retained following his first international appearance in more than a year.

Porter is joined on the bench by fellow forwards Kilcoyne, Kelleher, Ryan Baird and Jack Conan, in addition to Murray, Larmour and back-up fly-half Billy Burns.