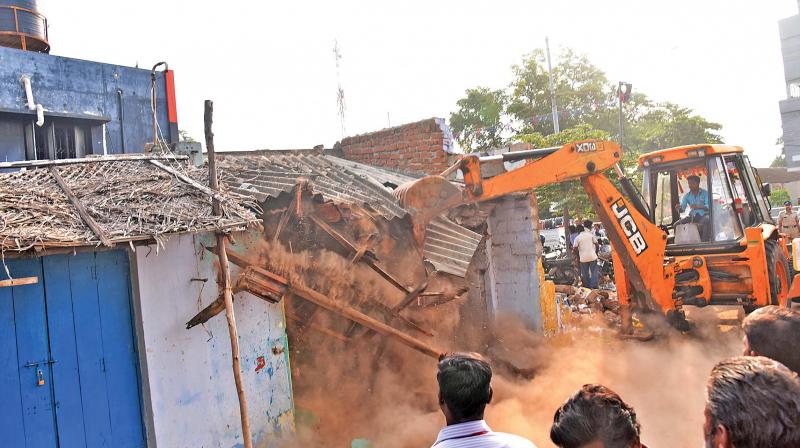 HYDERABAD: Despite High Court instructions, the Greater Hyderabad Municipal Corporation (GHMC) is yet to finalise the list of unauthorised constructions in the city.

The ground level staff has been ignoring the instructions of their higher authorities. Consequently, unauthorised constructions are mushrooming in every nook and corner of the city. Lack of coordination in the town planning wing has emboldened builders to indulge in irregularities and cheating consumers. In several cases, builders have been obtaining occupancy certificates despite finishing the construction and handing over the semi-constructed structures with violations to their clients.

Surprisingly, despite multiple directions from the HC, the civic body has not demolished even a single unauthorised above G+2 construction,. The GHMC has demolished several huts and sheds though.

However, the corporation has neither made any field inspection nor scrutinised constructions till date. It does not even have data to disclose the number of illegal structures erected after the due date. The HC has been continuously rapping GHMC for not controlling the unauthorised construction.

In fact, vexed with the civic body's lethargic approach, the court on March 4 has warned that heads would roll, from the top category to field-level staff, if any delinquency is noticed in curbing illegal constructions.

"If they don't pick up the thread even now, they will face the consequences," said Chief Justice Kohli.

The Occupancy Certificate was issued wide proceeding no: 1/C20/07787/2020 dated July 21, 2020 even though the commercial complex was not constructed as per the approved plan. The builder, after obtaining the O.C, deviated from the approved plan taken vide building permit no. 22272/HO/WZ/CIR-11/2013 dated 15th April, 2013 and has gone about with unauthorised constructions in the premises.

Reddy suspecting the role of ground level staff of irregularities said that despite GHMC's notices under section 452(1) & 461(1) of GHMC Act 1956, vide No:86/UC/W.No.104/CIR- 20/TPS/GHMC/2021 dated February 20, 2021 to demolish the illegal structure, the builder has continued the illegal construction activity at the site. This is just a tip of the iceberg.

According to GHMC's preliminary data there were over 1.5 lakh illegal constructions in the city. On why they have not demolished such illegal buildings, GHMC authorities said that they have obtained data from circle and zonal offices.

A senior GHMC official said that the corporation would first compile the data and submit it to the HC and subsequently take up the demolition drive.